I had high hopes for the 5th Annual Queens County Bird Club Big Sit this past Saturday at Fort Tilden. We had persevered through four years at the top of Battery Harris Platform and could bring our experience to bear on the task of trying to record as many species as possible on a single day from that single spot. Not only that but the weather forecast, which called for winds out of the west-northwest and northwest all day long after days of south winds, was as perfect as we could have hoped for. Even the light rain that was predicted for the early morning hours could work to our advantage, bringing migrants down out of the sky near dawn and extending the period of activity later into the day.

Despite my optimism I was cold and lonely at just after 5:30 AM when I arrived on the platform in the dark and drizzle. As I placed my gear and sipped my coffee I was pleased to hear a Blue Jay call, an odd first bird for the count. Then I pulled out my bluetooth speaker and started broadcasting a Northern Saw-Whet Owl call only to have the battery die after about thirty seconds. Oops. It was not an auspicious start to the day. Then Matthieu Benoit, French birder extraordinaire arrived, and we heard a Black-bellied Plover call from the beach and despite it still being dark and wet and cold and windy it seemed like things would be alright. That plover would be only one we would record for the day and it made getting out to platform a full hour-and-a-half before sunrise well worth the sleep deprivation and existential dread of the night we had to overcome. 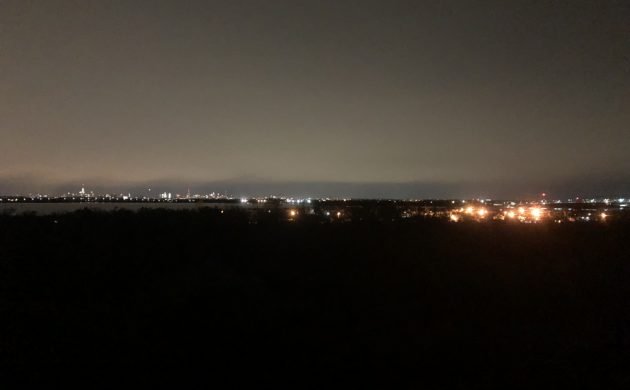 pre-dawn view of Manhattan from the platform

As the sky started to lighten the local birds and refueling migrants started to make noise with Eastern Towhees, Song Sparrow, White-throated Sparrow, Northern Mockingbird, Northern Cardinal, and other common species making their way to the checklist. Our tally kept growing as the sky kept getting lighter with American Kestrels – of which over five hundred had passed by on Friday – and Sharp-shinned Hawks popping up from where they had overnighted before continuing their migration. American Robins made their familiar flight calls as they made their daily flight to feeding areas and the first Purple Finches of the day pik-pik-pik-ed overhead. Scanning the bay side as Laughing Gulls streamed west by the hundreds netted us three Black Skimmers, our only sighting for the day, and Canada Geese, Brant, and Double-crested Cormorants were picked up in flocks. 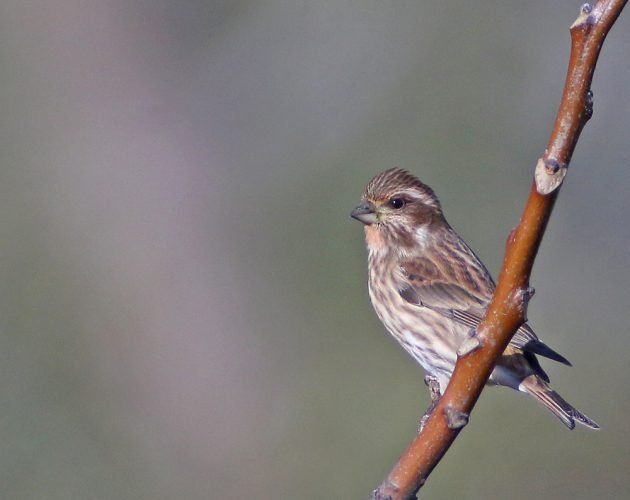 We recorded triple-digit Purple Finch and some hung around in the vicinity of the platform until later in the day when the light got nice.

Waxwings and goldfinch, flickers and sapsuckers, Tree Swallows and Ring-billed Gulls: our list kept growing and we kept listening and watching. Matthieu managed to photograph some blackbirds as they went past and we were surprised when he examined the photos that some were Rusty Blackbirds! A new bird for the Big Sit and a clue that the day was going to be good. Eventually, Lisa Scheppke, a Big Sit veteran arrived, and we kept birding and birding and birding. A singing Red-eyed Vireo, a flock of Wood Ducks, a Gray Catbird mewing from the bushes, a flyover Belted Kingfisher, and Greater Scaup flying past on the ocean all kept our tally rising. 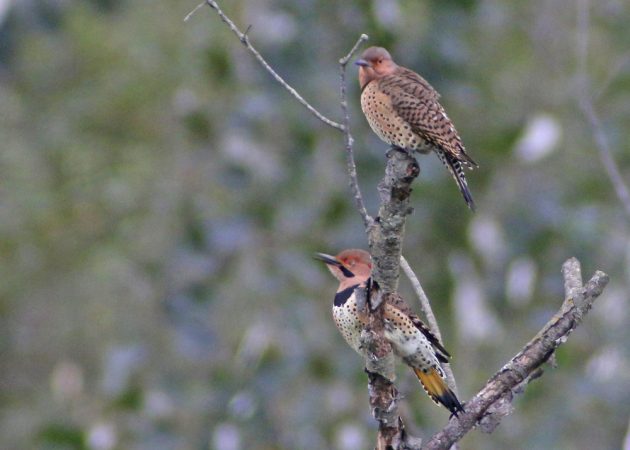 Northern Flickers were around all day long in numbers. We have never missed this bird on the Big Sit and I can’t imagine that we ever will.

Cesar Castillo arrived and we all kept birding, getting bird after bird after bird. At 8:30AM we were already at 53 species and we knew we still had many more easy birds to find. 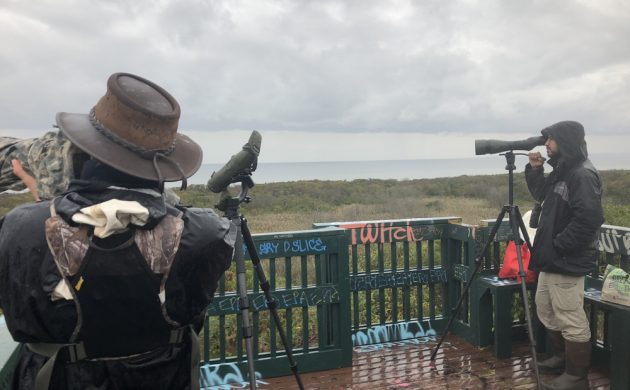 Sea watching netted us Black and Surf Scoters, Green-winged Teal and Royal Terns. Bay watching netted us Mute Swan and watching the sky overhead added Chimney Swift. Cesar found our first-for-the-count Northern Gannet. (Somehow we had never had one before but by the end of the day we had seen four.) By 10:30 AM we had managed to reach 72 species, tying our third highest species count and only four off of our all time record of 76! At one point we added three new birds in the matter of a minute when a Savannah Sparrow popped up in front of the platform followed by a Black-throated Green Warbler to our left that was joined by a Ruby-crowned Kinglet. It seemed like everything was breaking our way and the sun hadn’t even broken through the clouds. 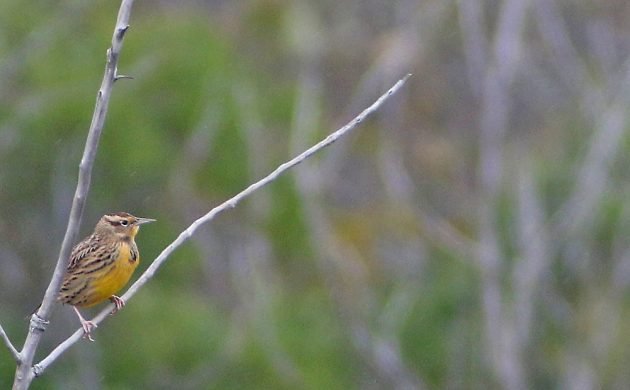 When Cesar had to leave we asked him to quickly walk through the brushy area below and to the south of our position, hoping he might flush something into view. Sure enough, he did, and Eastern Meadowlark joined our count for only the second time. 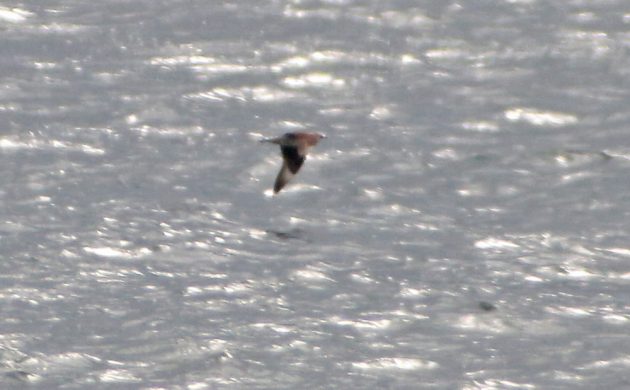 Shortly after Cesar left we were pleased to get our second Parasitic Jaeger for the count and on our second consecutive year! It’s a lousy photo but a very fun bird.

The Littoral Society field trip to Fort Tilden, which coincides with our Big Sit every year, brought a crowd of folks to the platform and they were there as we broke the record. I think it was Red-throated Loon out over the ocean that put us over the top but it was a flurry of birds all in a row that got us from 73 or so to 78 or so very quickly so I don’t have the clearest memory of which bird actually got us our record. Steve Walter arrived while the Littoral Society was present and his hawk watching skills were a help through most of the afternoon as falcons and accipiters bombed through in numbers. 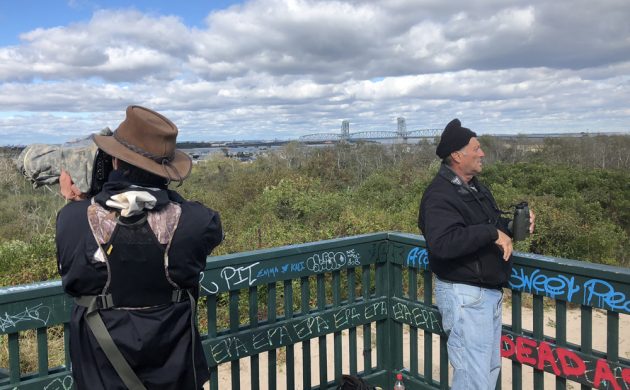 Matthieu and Steve enjoy a nice moment of bright sunshine as we kept cranking up the numbers as the day went on.

Amazingly, we were soon at species number 80 when a pair of Common Ravens flew high over the platform only to land in some trees well to our west (and onto the Big Sit checklist for the first time). We soon forgot about them while we watched the ocean and the bay and the skies in front of us but then we started to hear one calling and it didn’t seem far off. Sure enough, it was just to our north harrying a…wait, that’s a Bald Eagle! Species number 81! 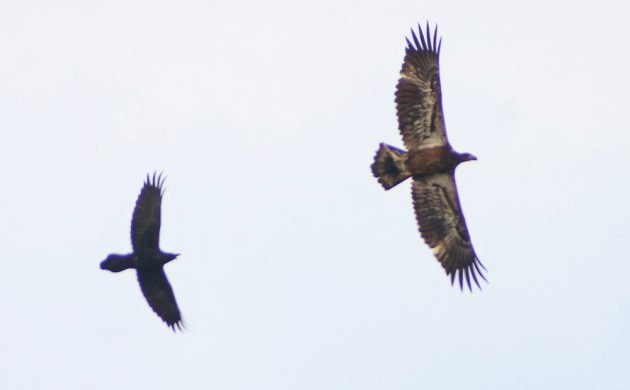 Twenty years ago if you had claimed a Bald Eagle being harassed by a Common Raven along the barrier beaches of Long Island you would have been labeled a stringer. It’s still a cool sighting but not utterly shocking like it would have been two decades ago.

Our numbers continued to creep up with a Barn Swallow ably photographed in the distance by Matthieu, a Common Tern amid the Forster’s Terns, and two Great Egrets way out by Plum Beach on the bay side. Chuck Beilman and two birders from Toronto came and spent some time. 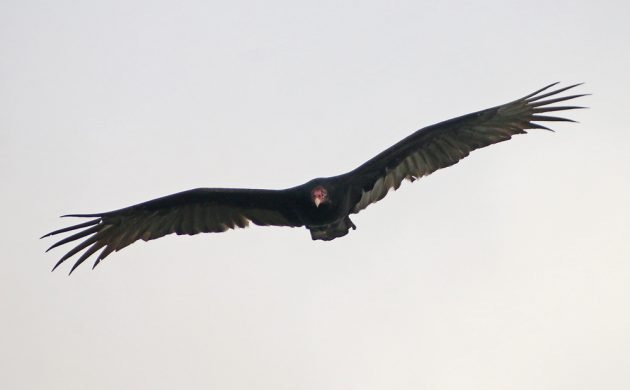 A very surprising trio of Turkey Vultures flew in from the east directly over the platform in the late afternoon. A nice addition to the list for sure!

We were running low on birds we thought possible with House Sparrow and Downy Woodpecker being two of the easiest left. Donna Schulman arrived,bringing much appreciated cinnamon buns. When Steve left the platform we asked him to walk into the community garden, a good half-mile to our east, and try to flush some House Sparrows up to where they would be visible. He did, calling me on my cell before doing so, and we managed to coordinate with him giving me the exact location of the flushed sparrows while I watched through the scope. 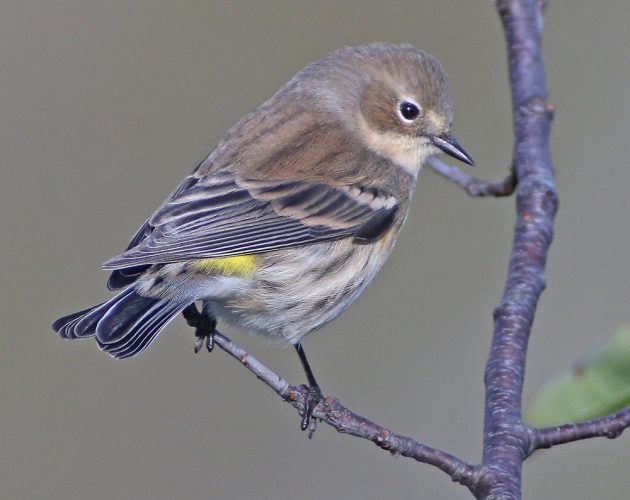 Yellow-rumped Warblers are never difficult to find on the Big Sit and this year was no exception.

Matthieu managed to get everyone on a fly-by Downy Woodpecker and we were at 88 species with daylight running out and very few birds we could think of that were likely to be seen. Then a flock of white birds out on the water caught my eye but a quick look through my binoculars was all I gave them. “Another flock of terns” I said.

Fortunately, Matthieu got them in his scope and encouraged me to take a look through my scope. We discussed them, saying things like “These birds are flying weird,” “They aren’t terns but they don’t look like Bonaparte’s Gulls,” and “These are something good, aren’t they?”

Finally, Matthieu’s brain clicked and he commented that we were looking at a flock of Black-legged Kittiwakes! Nine of them! In retrospect, their identity was obvious but we just weren’t expecting to see one of them much less nine! 89 species! 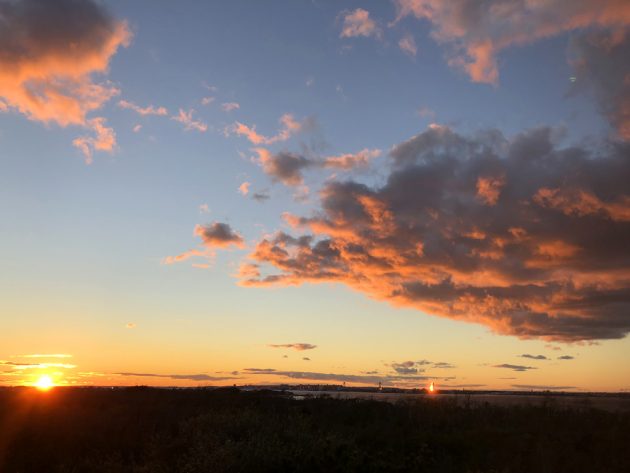 Sunset was gorgeous but we wanted more time!

At 89 species we didn’t want to give up without reaching the nice round 90. Mattieu remembered that about an hour earlier I had a tantalizing glimpse of sparrow that I couldn’t identify before it was flushed into thick brush by folks visiting the platform (the view is marvelous from up there). He started scanning the brushy area where the bird had disappeared in front of the platform and eventually managed to find the bird but none of us could identify it as it stayed skulking in the vegetation. Eventually I decided to go for broke and slowly walked up to the bird and it flushed…directly onto a fence post where it obligingly sat for far longer than we needed to identify it as a Lincoln’s Sparrow! A new bird for the count – our 11th on the day – and species number 90! It was a great way to end a thirteen-hour Big Sit! 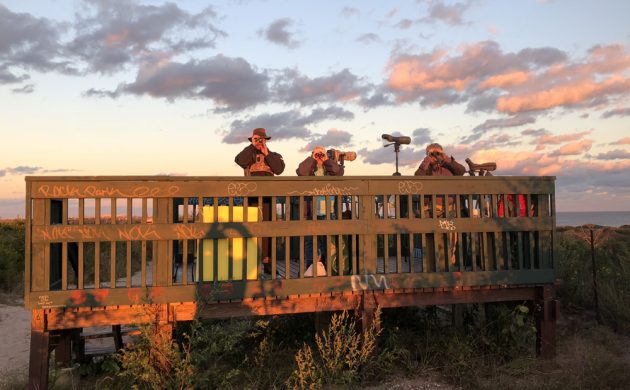 Matthieu, Lisa, and Donna stare into the sunset.

On his train ride home Matthieu added our 91st species by finding an American Pipit among the photos which he took during a flurry of passerine movement midway through the morning. We broke the record by 15 species, added 11 species to the composite count (bringing it to 117), and had a great time doing it. Here’s hoping we get you to come out to the Battery Harris Platform next October for the Sixth Annual Queens County Bird Club Big Sit!

And if you’re interested in looking at our awesome checklist on eBird, here it is! 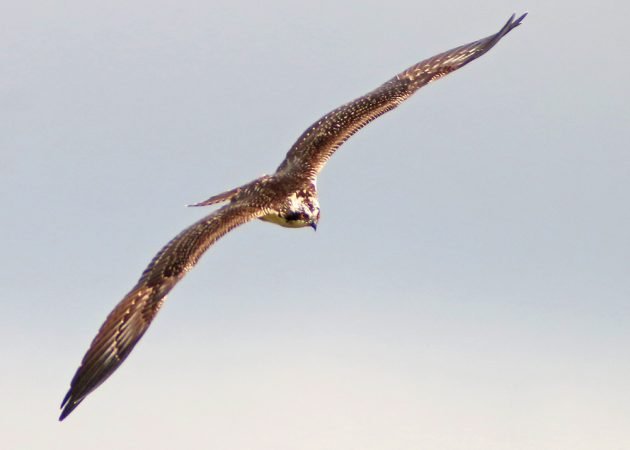