It is not every day that a birder from the northeastern United States gets to see a Slate-throated Whitestart, a member of what must be considered my favorite family of birds, the wood-warblers or Parulidae.  It is an even more rare occasion for such a birder to get a decent picture of such a bird.  And, just to go one more step, it is extraordinarily absurd to see and get decent pictures of Slate-throated Whitestart while comfortably sitting at a table in a restaurant drinking a large and tasty pilsner.  But that is the circumstances under which the photos in this post were taken at Mirador Rio Blanco in Ecuador. The Slate-throated Whitestart used to be known as the Slate-throated Redstart until the geniuses that give birds their common names remembered that “staart” means “tail” in Dutch and it is dumb to call a bird “redtail” if it actually has a tail of black and white.  There are populations of Myioborus miniatus in high, humid forests from Mexico south to Argentina but the differences between the twelve different subspecies, especially in the color of the underparts, which range from red in the northern part of the bird’s range to orange in Central America to yellow further south, are vast.  In Ecuador they have underparts of yellow with a bit of an orange tinge on the chest and are really quite striking little birds.

Because of their widespread range, large population, and a lack of evidence showing any decline the Slate-throated Whitestart is classified as a Species of Least Concern by Birdlife International.  In fact, a paper published in 2005 (link is a PDF) revealed that the northernmost and nominate subspecies had been found breeding 400 km north of the previous northernmost known breeding record.  There have even been records of Slate-throated Whitestart in the United States, though, of course, the ABA considers them merely a casual visitor (and still calls them “Slate-throated Redstart“). Most birders will almost certainly never see a Slate-throated Whitestart in the United States, of course, so one must travel to see them.  I only had brief views of the red-orange-underparted one that was my lifer in Honduras, and, until this cooperative individual I had only fleeting glimpses of the yellow-underparted subspecies in Ecuador.  Of course, while one is birding in the range of the Slate-throated Whitestart there are a host of other, larger, more impressive birds competing for one’s attention, so it is might be difficult to really focus on a little bird, when, say, other birders are calling one’s attention to a toucanet.  Nonetheless, Myioborus miniatus is worth watching, as most wood-warblers are, both for its intrinsic beauty and because it is wood-warbler, and, come on, does anyone need a reason to watch a wood-warbler? 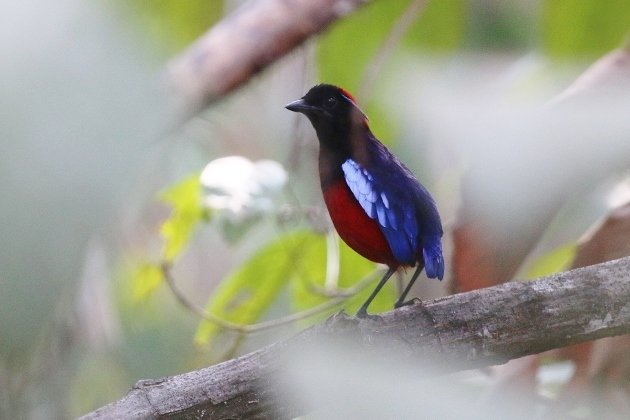 "Keep your taxonomy out of my field guide" - revisited