While I was in Maine for Memorial Day weekend I managed to get away early one morning, on Memorial Day itself, to check out Scarborough Marsh, mere minutes from where we were staying in South Portland. It was a cold, wet morning and though I gradually built up a decent list of birds it was not easy, especially considering I had never birded at the famed saltmarsh and didn’t really know the best spots to search. Nonetheless, I was having a pretty good time and my list eventually had almost fifty species on it.

Then, scoping from the end of Seavey’s Landing Road, I spotted an egret. It was like no egret that I had seen before. Mostly white, it was about the size of a Snowy Egret but with a bill that was a bit too long, patches of grayish-blue plumage on the neck, back and wings, and two long head plumes. I was really hoping this was a Little Egret which would be a first in North America for me, but the patchwork plumage was really throwing me. The yellow lores worked for a Little Egret in breeding plumage but I couldn’t figure out why, it was a Little Egret, it wouldn’t be an all white bird. I digiscoped up a storm and shared some back-of-camera images via text message and on Facebook. 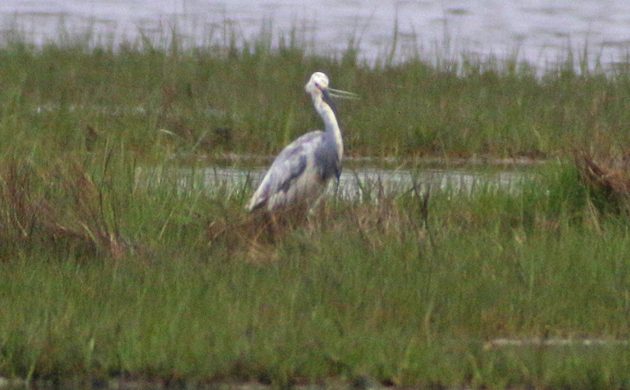 I spent a long time watching this bird, getting images, and getting video.

Suggestions started to come in via text and Facebook. A Little Egret, a Western Reef Heron, a hybrid between those two, and, from Zach Schwartz-Weinstein, a hybrid Snowy Egret X Tricolored Heron. I stuck with the bird, gradually getting a better feel for it, and soon realized that it lacked the yellow feet one would expect on a Little Egret. All black feet and legs? What was this bird? 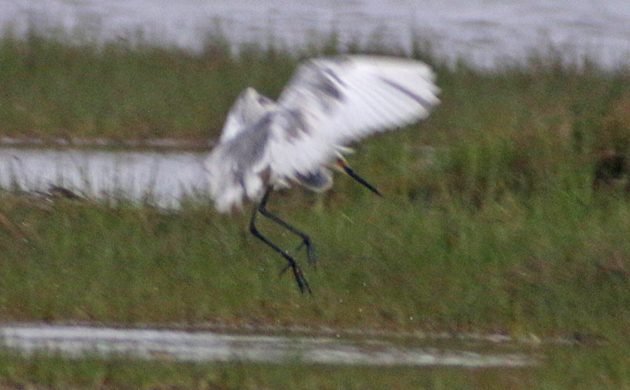 The bill is way too long for a weird Snowy Egret, the all black feet rule out several species, and that patchwork plumage is bizarre. 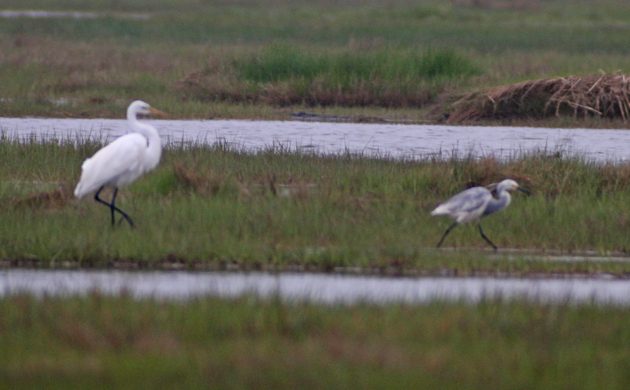 Way out of focus on this shot but the direct comparison with the Great Egret should give you an idea as to the bird’s size.

Now, if you’ve read the headline of this post you already know that Zach was right and it is a Snowy Egret X Tricolored Heron. I learned this because Tom Johnson – the man, the myth, the legend – showed up on my Facebook page and let me and those speculating about the bird that there is at least one and perhaps several of this hybrid that have been haunting Scarborough Marsh. They are well known to the locals.

Blergh. After spending nearly an hour on this bird I was kind of peeved. Well known to the locals? I really could have used an interpretive sign warning visiting birders about this freak of a bird. I spent a whole hour trying to figure out what it was and enlisted nearly a dozen people from across the United States in an attempt to identify it. All for a well-known hybrid? Sorry everyone…

Sorry for the shaky video with lots of wind noise. At least it’s a video!

Nonetheless, it was a cool bird. And it was nice to be a counter example to Seagull Steve’s belief that the increase in reports of hybrid birds is because of birders’ laziness. And I guess I learned something about hybrid herons and egrets. (Mostly that they suck.)

What about you? Have you ever spent an inordinate amount of time on a bird only to discover it was something that you wish you hadn’t spent such time on? Do share in the comments!

« Previous post
Peterson Field Guide to Bird Sounds of Eastern North America: A Book Review by a Sound Challenged Birder
Next post »
Best Bird of the Weekend (First of June 2017)