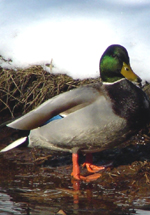 Apologies for the forced Soundgarden reference, but I wanted to combine both the agony and ecstasy of our latest birding excursion in one title. This weekend, the Core Team was overcome by cabin fever. We had to get out of the apartment, despite the lethal cold. So, we bundled up and joined members of the Hudson River Audubon on a birding tour of some Long Island winter hotspots.

Michael Bochnik, birder extraordinaire, had an ambitious itinerary in mind. We started at Massapequa Preserve, well known for its winter population of Long-billed Dowitcher and Common Snipe. This was a proverbial snipe hunt, since we never found our quarry. The fact that nearly every body of water was frozen solid probably had something to do with it. However, we did spot Mallard, American Black Duck, and Canada Goose, as well as a solitary female Bufflehead and a pair of dozing Green-winged Teal. We also saw lots of gulls, mostly Ring-billed, but also Herring and Greater Black-backed. Even common birds like Mourning Dove, American Robin, Blue Jay, White-throated Sparrow, House Finch, and Northern Mockingbird were well-received in this snowy terrain. Red-bellied and Hairy Woodpecker both made appearances. The more notable birds included Cooper’s Hawk, Sharp-shinned Hawk, Fish Crow, American Coot, and Winter Wren.

The cold was a real spoiler, since the birds were as loath to be out as we were. We rushed through our first two stops and gave up on another one, but our group pressed on to Tackapausha Preserve, also in Massapequa. I joked that if we did find open water, the ducks would be stacked up like cordwood. This turned out to be no exaggeration. The one unfrozen pond at the preserve was overflowing with waterfowl. In addition to Mallard, Black Duck, and Canada Goose, the pond held American Wigeon, Hooded Merganser, and Black-crowned Night-Heron. A few Brant joined the other geese in begging us for food, which really helped highlight the size difference between the two species.

This last stop paid off in the currency I most appreciate: new species. The first of these swooped in to menace the ducks. It was an unfamiliar raptor, lacking the obvious field marks of the usual hawks. We’re fortunate that we were accompanied by expert birders, because otherwise, we would have never guessed it as an immature Red-shouldered Hawk. These birds are fairly rare in these parts, so this sighting was a thrill for everyone.

Every time we go birding with Michael, we hear the song of a Carolina Wren but never actually spot one. This has actually become a running joke because no amount of pishing seems to attract wrens when we’re around. But we’ve seen a Carolina Wren at last. The group was focused on a friendly Rusty Blackbird when we heard that beautiful song, unmistakable to the initiated. Michael was able to lure the wren closer a little bit at a time until finally we spotted it — the white eye-stripe, the rufous back, and the buff, almost orange belly. The wait was worth it. However, that was the end for us. We might not go outside again until summer!