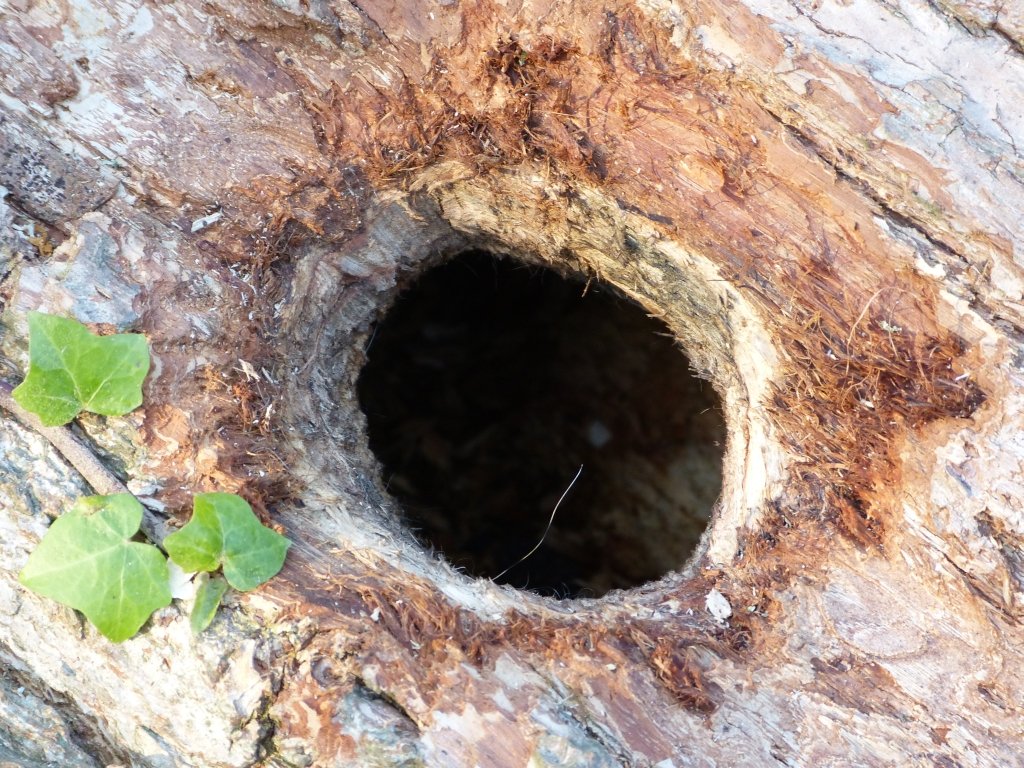 Here’s a can-you-top this tale of cutting down trees in the springtime.

In the spring a few years back, a man cut down a tree on his property outside Philadelphia. As he was sectioning the trunk, he saw two holes and heard peeping sounds coming from within. Both were too small for a human hand and too deep to see what was inside, so he called PMWC and was asked to bring the entire section of trunk to the center. Director Rick Schubert carefully drilled around the small opening and removed a larger piece.

“Their parents had bored a hole deep enough into the tree’s trunk to keep the babies warm and safe from a hawk’s talons or the reach of a raccoon,” said Michele.

As the four nestlings were quickly placed into an incubator, sounds from the other hole continued. After a similar procedure, Moya’s watch-me-pull-a-rabbit-out-of-my-hat trick produced a fuzzy nestling Eastern Screech Owl. “Cutting one tree down displaced two very different wildlife families,” said Michele. “The birds were living like city apartment dwellers … the upstairs neighbors were the woodpeckers, downstairs were the screech owls. Sounds like a sitcom! Imagine the nocturnal owls trying to sleep… ‘I told you we shouldn’t have moved near those woodpeckers!’ “

For weeks the naked little woodpeckers required feeding every half hour, sun up to sundown. When they feathered they were moved to different habitats, learned to fly and catch their own food, and eventually were released. The screech owlet joined the other young screech owls already being cared for at the center, learned to fly and catch prey, and eventually they were released as well.

“Although they were all successfully released, it was a sad story,” said Michele. “Two families were split up and made homeless by the cutting of one tree. People can do so much to help wildlife just by avoiding trimming bushes and trees during the spring and summer.”

Luckily the man who felled the tree heard the nestlings and provided a wildlife rescue. In a more normal sequence of events the sounds would remain unheard, the nestlings trapped, and the parents unable to reach them. Or, too often, the entire section would be tossed into a wood chipper.

If trimming or cutting cannot wait until fall, make sure the tree is not home to a growing family. Hire licensed, reputable companies who care about your trees as well as their occupants.

“We’re always careful to check for wildlife, alert the owner, and work around nests and cavities,” says Mac Horgan, owner of Valley Tree Experts in New York’s Hudson Valley. “We also stress the ecological value of standing dead trees, and encourage the owner to leave them up as long as there’s no risk of property damage if they come down on their own. Even if you remove the branches and cut the tree to a safe height, it will still provide homes to birds, mammals, insects, and fungi. They’re called ‘habitat poles.’”

Remember that disturbing an active nest is a violation of the Migratory Bird Treaty Act and a crime. If you see someone cutting down a tree containing eggs, nestling or fledgling birds take photographs, then call the Law Enforcement Division of U.S. Fish and Wildlife Service at 1- 844-FWS-TIPS (397-8477).

Banner photo by Texas Parks and Wildlife. All other photos by Philadelphia Metro Wildlife Center. Want to help PMWC continue their important work? They are a registered 501(c)3 and all donations are tax-deductible.