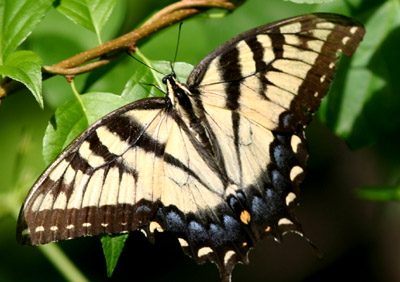 I think hobnobbing with so many fantastic bug bloggers is getting to me because I find myself paying increased attention to invertebrates out in the field. I’m particularly enjoying butterflies, moths, and dragonflies, the species most bird watchers seem to be susceptible to. In some cases, these creatures are hard to ignore. The lemon cream lovely above is a great example of a butterfly which simply must be admired.

If you live anywhere in North America east of the Rocky Mountains, you’ve probably encountered the Eastern Tiger Swallowtail. Though I’m no lepidopterist, I’m fairly certain that only Monarchs and Cabbage Whites cross my path with greater frequency. Swallowtails are generally large butterflies, and Papilio glaucus is no exception. The female in the photo (I believe males show less blue in their wings) was probably as wide across as my hand. The southern brood is said to trend both larger and more richly colored than the northern set.

Eastern Tiger Swallowtails are tricked out with the hindwing projections for which Family Papilionidae is named. Swallowtails are interesting for a number of reasons, mainly for their impressive size and because their caterpillars possess unique organs capable of emitting a foul-smelling secretion in response to danger, much like skunks, but smooth and green instead of black, white, and fuzzy. Eastern Tiger females also dabble in occasional defensive mimicry, adopting a dark form resembling the poisonous, less palatable Pipevine Swallowtail.