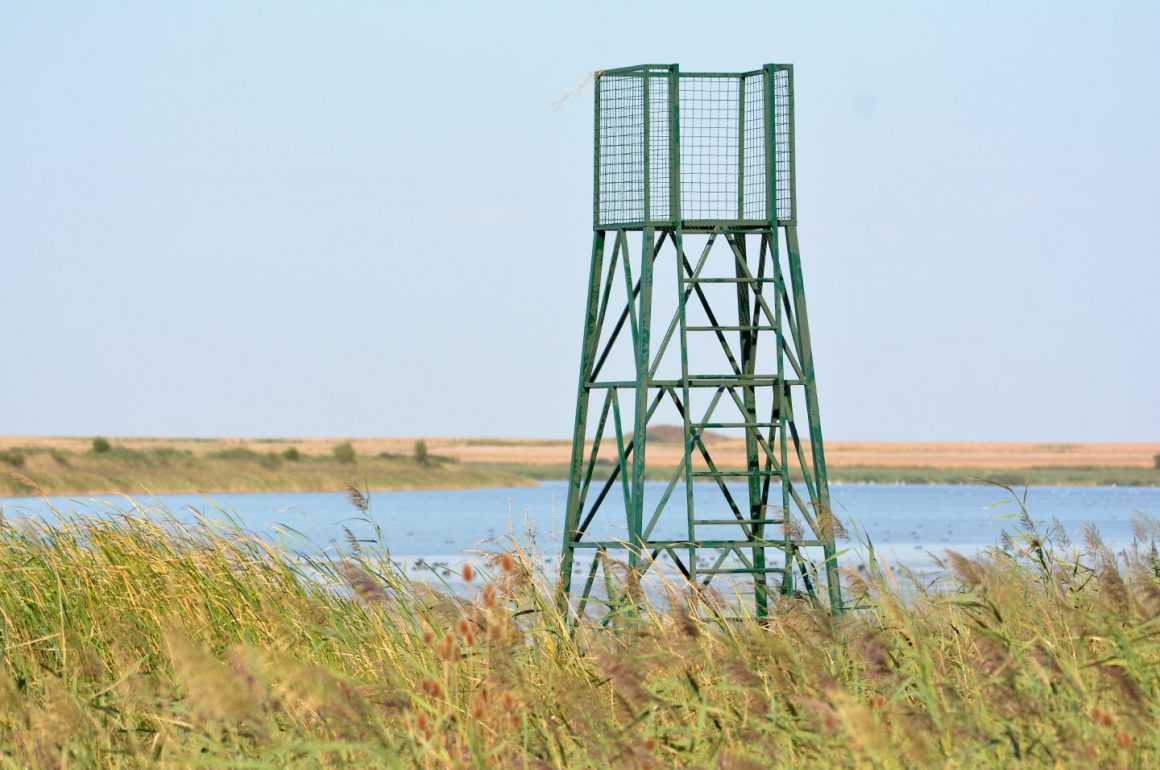 The very best wetland birding around Belgrade, Serbia, is not to be found in the locally famous and tourist-promoted Obedska or Carska Bara Ramsar areas, but at Beljarica Backwaters and the fish farm triangle of Centa, Baranda and Sakule villages, in the Tamis River floodplain. You can spend the entire day birding those areas, but during winter and migration seasons, visiting some of the fish farm lakes edging the Carska Bara Reserve, farther north, may also prove fruitful.

In my description of the proposed tour, I will measure the distances starting at the Pancevo Bridge because most visitors stay somewhere in downtown Belgrade and that is the closer one of the two useful bridges. I will presume that you would rent a car for the tour, but, if not, keep in mind that the suburb of Kovilovo (4 km / 2.5 mi ahead of Beljarica, bus No. 106) and the town of Opovo (4 km / 2.5 mi ahead of Baranda, bus No. 110) are reachable by a rather extensive system of Belgrade city buses. 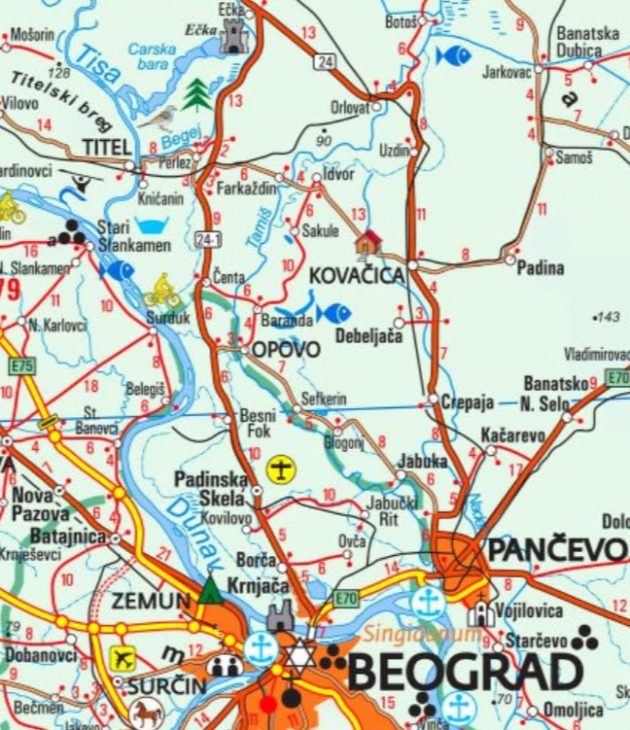 From the Pancevo Bridge, there is 10 km / 15 mi to the Kovilovo turnoff, and 6 km / 4 mi more to reach the levee around the Beljarica Backwaters (the area marked “Dunav” – the Danube, on the map). It is a spacious floodplain between the River Danube and the levee, 2.1 km / 1.3 mi at its widest point, consisting of seasonally inundated riparian forests, industrial poplar plantations, river arms and ponds with 60 mammal (Eurasian Otter, Roe Deer, Wildcat, Golden Jackal, etc.) and 180 bird species (Ferruginous Duck, Black Woodpecker; Icterine, Eastern Olivaceous and Barred Warblers) recorded so far. In June 2021, the Mayor of Belgrade announced that Beljarica will finally become officially protected.

Park at the beginning of the route (driving along the levee is prohibited and the barrier is often closed and locked), but at the side – be sure not to block heavy lorries full of poplar trunks. I made this tour myself several days ago (late July), and will report mostly on the species I actually found, as well as some mammals. Two Wild Boars crossed our path, returning from the arable field where they fed overnight, to the safety of Beljarica. Sows with piglets can be dangerous – stick to walking along the levee (there’s no shade, bring a water bottle and a hat).

Here we encountered Garganey, Black-winged Stilt, Little Ringed Plover, Green and Wood Sandpipers, Whiskered Tern, Black and White Storks, Pygmy Cormorant, Great White Egret, Squacco and Black-crowned Night-Herons, White-tailed Eagle (I wasn’t counting this time, but close to 10), European Bee-eater, Eurasian Golden Oriole and Red-backed Shrike, among many others. For most species, the breeding season ends by the end of June and the majority of songbirds are silent and invisible now.

From Beljarica, go back to the Kovilovo turn off, turn left/north onto Zrenjanin road for some 9 km / 5.5 mi, to the Vrbovski turnoff. We followed that road for several kilometres to find half a dozen Black Kites quartering the fields. 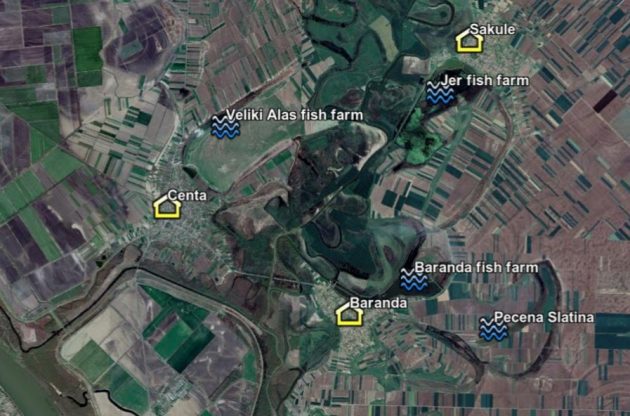 Back to the Zrenjanin Road and continue another 15 km / 9 mi, and by the end of the Centa village turn into an inconspicuous dirt road leading to the Veliki Alas fish farm (north of the village). If there were rains recently, this section of 0.3 km / 0.2 mi is not passable by car (and sometimes because of the deep ruts left by tractor tyres it may not be passable even when dry). After this, turn left and follow the mostly good dirt track (yet, with several large potholes). It will take you along the oxbow lake (not used for fish production and the entrance is not restricted) and through a pasture with scattered bushes (there’s no shade).

While the waterbirds are good here (we found Black-tailed Godwit, Ruff, Whiskered Tern, Little Bittern, Purple Heron, Great White Egret, even 4 uncommon Cattle Egrets, Squacco Heron, Western Marsh Harrier, Sand Martin), I normally come for grassland species, of which we found only a young Whinchat (and not a single Corn Bunting, Whitethroat, Skylark nor shrike or a Montagu’s Harrier), because the breeding season was over.

Now you can check the fish farm lakes on your left (but here you have to ask for permission in the management building, the last one on the right hand side) or you can drive on until the first, very slight band in the road. When you spot an ancient burial mound to your right (as described herein), there will be a dirt track leading through the arable fields by the mound towards 2 saline lakes (the third one is not interesting, it’s not even marked on the map). At the time of writing, the road was passable for ordinary cars. 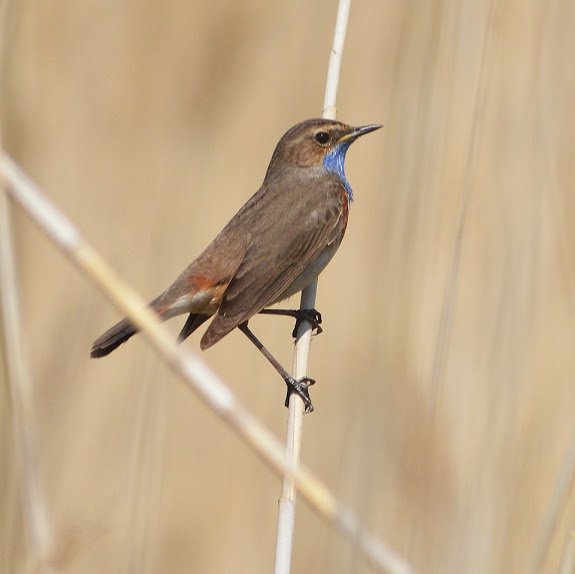 Bluethroat at Pecena Slatina in April, by Ceda Vuckovic

These saline lakes offer 25 species of shorebirds, Bluethroat and the Moustached Warbler (when they do bother to show off). Strategically erected at the best birding spot, the watchtower has no stairs but a very steep ladder (cover photo). The first lake, on your right, holds the usual set of waterbirds, but the next one, Pecena Slatina, on your left and marked by the watchtower, holds shorebirds (scope recommended), of which we found mostly Black-tailed Godwits. In July, the lake is known to hold Black-winged Stilt, Pied Avocet, Northern Lapwing, Little Ringed Plover, Eurasian Curlew, Ruff, Little Stint, Green Sandpiper, Spotted Redshank and Wood Sandpiper. This section also offered a European Turtle Dove.

10 km / 6 mi north of Baranda lies the village of Sakule. Before that, on a rather sharp right bend, 1.8 km / 1.1 mi farther on, there is a dirt track to the left, worth exploring in the breeding season (Eurasian Penduline Tit, Moustached, Sedge, Eurasian Reed, Great Reed and Savi’s Warblers). We continued on to Sakule. When you reach the church, use the street to the left, right opposite to the church yard gate, and follow it till the very end. When you reach a T-junction, turn left to reach the Jer Lake embankment.

This is a part of the fish farm, but the one where daily permits are sold to anglers, and you are likely to encounter a warden checking if you are a poacher. Show him your binoculars and say “gledam ptice” (I am watching birds), you are not the first birder to visit the area.

Finally, when you finish with birding, it’s time for a beer or some lunch. Head back to the town of Opovo and ask for the Kod Bobe Restaurant (Chez Boba), a second generation in the same family and the best restaurant in the region. The current owner actually inherited not just the restaurant and its reputation for quality, but also his mother’s nickname. Fortunately for him, Boba is equally used for both male and female names. Bon appetit. You have 30 km / 19 mi / 40 minutes to reach Belgrade. 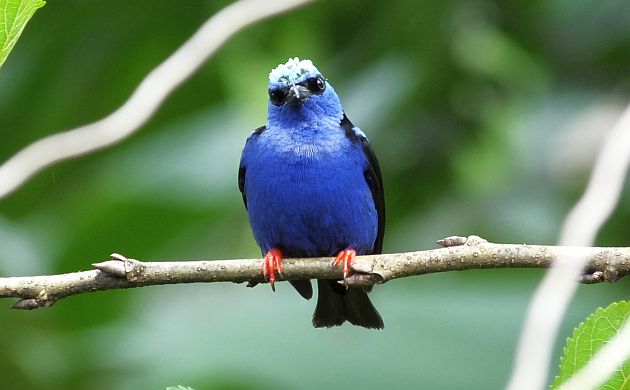 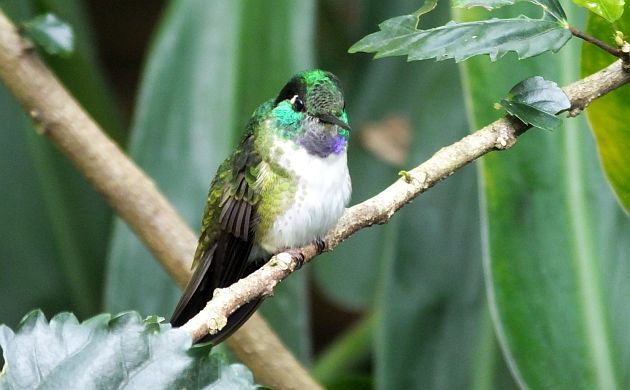