The “Birds” in the Brush 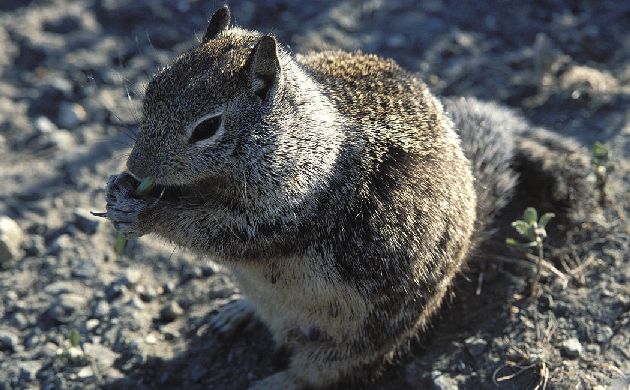 Ah, late spring. You hear a loud, unfamiliar chirp from near the ground. Over the years you may have learned to know better but it’s spring and you’re hopeful and maybe this time it’s an unfamiliar sparrow of some kind… but after maneuvering carefully around to a line of sight, it’s that furry little air-raid siren the Eastern chipmunk again. You sigh and move on.

When you move on to Montana, you discover that there are worse things that one species of tiny screaming mammal tricking you each year as you try to cope with an influx of songbirds and a winterized memory bank that contains only Black-capped Chickadees and Dark-eyed Juncos (and only about half their calls at that.) For instance, one could have to cope with many different screaming mammals, living in many different habitats, making many different noises, all of which sound enough like bird noises that maybe, just maybe, you should check.

Montana has four species of chipmunk and six species of ground squirrel. The chipmunks, well, they all are fairly chipmunk-esque: small, stripey, and shrill. Ground squirrels, to those who are not used to them, are more curious beasts, caught in a taxonomic middle ground between the larger marmots and prairie dogs and their smaller chipmunk cousins. They tend to be disunified in many ways — some stripey and some solid and some mottled, some vegetarian and some prone to eating insects and worms, some highly social and some merely tolerant of each other in suitable habitat, which may include prairie, sagebrush, and even (in the case of the golden-mantled ground squirrel) forests, where the species looks enough like a chipmunk itself to add a further layer of confusion to your birding day. Almost the only universal thing that can be said about the ground squirrels is that they live on, and in, the ground. One species, the Wyoming ground squirrel, spends only about three hours a day above the surface of the earth, and that only on days during the four months of the year when they are not hibernating. But when they are out and about, they can become highly noticeable.

I began thinking about ground squirrels while looking for the Baikal Teal. The teal’s habitual stretch of irrigation ditch ran through a mowed area that occupied its own semantic no-man’s-land between lawn and pasture. A large number of ground squirrels – Columbian by my best guess — would emerge in the morning and evening birdy hours, apparently not dissuaded from their business by the presence of nesting Red-Tailed Hawks nearby, and proceed to form a most welcome distraction from the tedious business of waiting for the duck to deign to appear. They mostly fed, and darted in and out of their burrows, and a few of them shrieked alarm calls at us until they got used to our presence; then they moved on to shrieking alarm calls at other things. We saw them run down to the shallow part of the stream sometimes, and a Great Blue Heron took one, soaking it before swallowing to help it go down easy. I suppose they do have a lot to be alarmed about.

Besides being food, ground squirrels can be friends to birds — most notably the Burrowing Owl, who relies on these and other digging mammals for nesting sites — or foes, when they perk up their diet with eggs and young from ground nests. But to many humans they are just a pest, eliciting endless recommendations from the internet on how to trap, gas, shoot, and poison them. The primary justification is their status as reservoirs for the plague and the fleas that may spread it, but their habit of “destroying” crops, pastureland (cows might trip!) and landscaping is the more pedestrian concern.