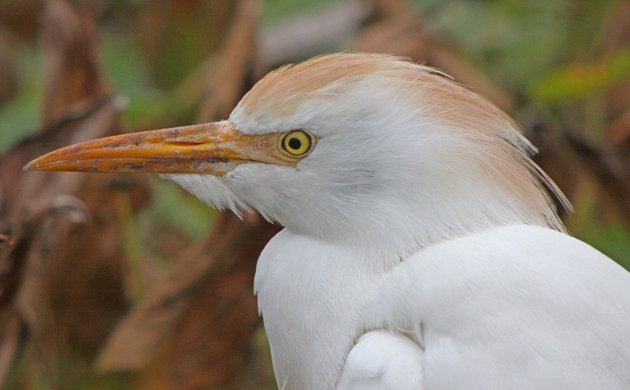 Will Raup is a birder from upstate New York who helped Corey learn a lot about birds when Corey was first starting out as a birder. He blogs at The Nightjar – The tales of an Upstate New York Birder and otherwise stays busy being an eBird reviewer, taking care of his kids, and, recently, planning a trip to Europe where he hopes to see lots of new birds.

When you think of invasives, you think of the birds that have been helped by human beings to get where they are, such as House Sparrow or European Starling.  Other species have certainly expanded their ranges, but never in such a rapid and global scale.

I’d like to introduce you to a diminutive heron, the Cattle Egret Bubuclus ibis.

The Cattle Egret is native to Africa, where it  is a familiar sight among herds of large mammals. They feed on insects stirred up by the herds, at times sitting on the animal itself picking off ticks and other insects. For reasons that are not quite clear, this species underwent a massive range expansion.  The species spread north to the Mediterranean, reaching parts of Spain and southern Europe, spread along the Atlantic coast of France and, at times, even reaching Britain and Ireland.  In the east, this species can be found along the east coast of Africa, the Nile Valley,and into parts of the middle east and India and southeast Asia.  They have expanded their range through Indonesia and into Australia and is found in post breeding dispersal as far north as South Korea and Japan.  There are two main subspecies, the nominate B. ibis and the eastern B. coromandus. Some authors have argued they are two separate species though most still consider them conspecific.  Cattle Egret is more closely related to herons in the genus Ardea then the species termed egrets in the genus Egretta.

But while their range expansion in the old world was made up of relatively short hops no one expected this species to move westward across the Atlantic Ocean to South America but it did just that! It arrived near the border of Guiana and Suriname in 1877, though it wasn’t until the 1930’s before this species became really established in the new world.  Cattle Egret was first recorded in Florida in 1941 (although originally these were dismissed as escapes), and officially bred in Florida in 1953.  The following decades continued the great expansion, and it was recorded breeding in Canada in 1962 and Chile by 1970.  The species has been recorded as far north as Alaska and as far south as some of the islands off Antartica.

Cattle Egret has been introduced by humans to Hawaii and the Seychelles.  A few other intentional releases in other areas were not successful.  Because of its sudden and massive range expansion in the New World it is listed as an invasive, but little negative impact has been noted in areas where this species moves. a Cattle Egret in Brooklyn

The reasons for starting such a large range expansion are unclear though it is obvious that Cattle Egrets are well adapted to living near humans.  Unlike most herons, Cattle Egrets do not eat fish, although the occasional toad or frog has been noted.  This species is primarily an insectivore.  While equally at home among cattle and elephants in areas where neither are available it has adopted airports, where they feed on insects that get stirred up by passing planes.

Despite the Cattle Egret‘s rapid expansion there are some areas that Cattle Egrets once occupied, but have now abandoned for reasons that are as unclear as the expansion was to begin with.  In the northeastern United States, Cattle Egret rapidly advanced in the 1960s and 1970s, before declining just as quickly in the 1980s and 1990s.  Cattle Egret is currently considered a migrant in most areas of the northeast, still annual along the coast, but now rare in many interior locations.  The decline of farming, combined with reforestation across the region have been noted as potential reasons for decline.  In coastal areas, efforts to eradicate mosquitoes and the associated West Nile virus may have had an unintended effect of affecting the insects Cattle Egrets feed upon.

Despite some fluctuations on the edges of its range, and some movements as the result of drought and other long-term weather phenomenon, this species population appears stable and well established across nearly all tropical areas of the world.