September 25, 2014 by Alfredo Begazo No Comments 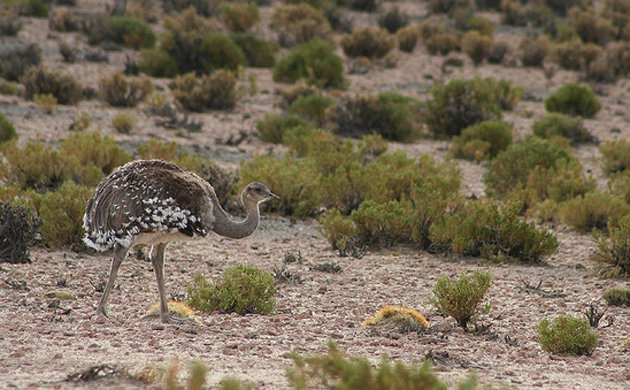 Mating systems and parental care patterns can be odd among birds. Male-female role reversal, happens in some familiar birds, but is rare. Less than 1% of all species exhibit role some type of role reversal where males do what females typically do. Male Phalaropes, Jacanas, Tinamous, and Rheas build nests, incubate the eggs and take care of the chicks.

Perhaps the most complicated and bizarre mating system is that of the Rheas of South America. They live in flocks in the open country shrubland of Southern South America. During the breeding season, adult males split from the flocks they normally live in and begin to advertise their availability to females by calling and performing body contortions. Receptive females join a harem with the male of their choice. After the harem reaches a critical number, mating begins. The male will mate with each female while they remain in the harem. He will then select a nest site and build a simple nest, basically a depression on the ground lined with leaves and other material. Females then begin to lay eggs in the nest the male prepared. And here is where the critical number of females in a harem comes into play. If too many females join a harem and lay eggs in a single nest, the male will not be able to incubate all the eggs properly. Some of the eggs will be lost to the elements. Also, eggs laying around the nest invite predators that once they consume the eggs outside the nest, they are likely to try for the eggs the male is incubating. Whether males or females decide what is the right harem size is unknown.

After the females lay so many eggs, they move on and continue looking for other suitable males and harems to join in and repeat the process. Females end up mating with several males laying eggs in as many nests as partners they can have during a breeding season. The male usually continues the incubation and once the egg hatch he will take care of them until these become independent. But, not all males will stay sitting on their eggs.
While most males will start and finish the incubation of their future progeny, some males delegate the nest to a younger, lower ranking male willing to do a practice nesting attempt. The older male then moves on and begins adverting itself again to form another harem and repeat the sequence. Rheas are rather promiscuous. All chicks never know their mothers, most are raised by their father, but some never know neither and are raised by an unrelated foster father. Whether the real father or not, male Rheas are extremely protective of the chicks under their responsibility facing off threats they would otherwise run away from; including humans.