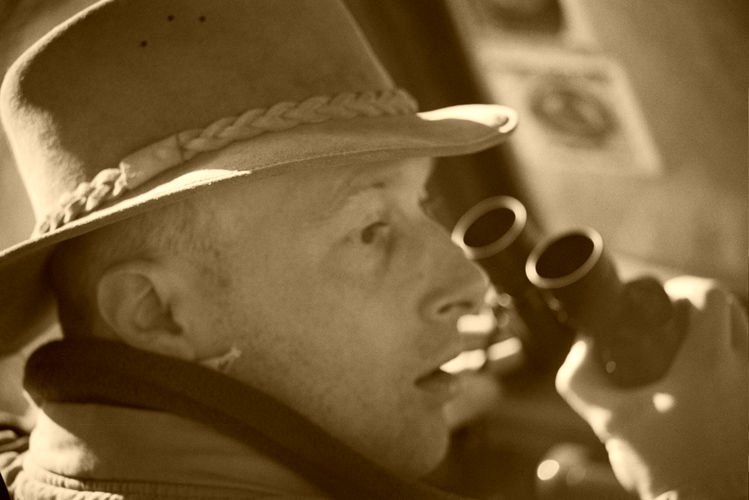 What happens when you put a naturalist in a kayak, adrift in Africa?

‘There are no crocs around here,’ said a smiling bartender. I think the warlord Mzilikazi must have had a similar smile while raiding the Bahurutshe, not far from where I dropped my paddle into the river.

Before it joins waters with the Matabele’s iliMphopho, the river of rapid rising and falling, known to the rest of the world as the ‘great, grey, green, greasy Limpopo’ of Rudyard Kipling’s writings, the Ngotwane River marks the boundary line between Botswana and South Africa. Overgrown by bush willows (Combretum), its banks are lush green as a stark contrast to surrounding yellowbrown palette of an arid Acacia savanna (sands of the Kalahari, ‘backbone of the world’ as David Livingstone described it, beginning only 20 or so miles from here).

While entering our double kayak I asked Andrew Hester, a local bird expert, if bilharzia is present in the shallows of the Ngotwane Dam, further down the river.

A rather unpleasant disease, it is transmitted by the parasites living in tropical freshwater snails and if anyone knows how to avoid touching the water with a kayak paddle in hand I’d be happy to find out. Parasites penetrate the skin, travel through the blood vessels and finally (if you’re lucky) settle in the urinary tract where they happily breed, doing irreversible damage to it (and if you’re less lucky they might get confused and settle inside your spinal cord or even your brain).

Andrew’s laconic answer was ‘No, I don’t think so. There could be bilharzia in the water but I have paddled here quite often and never got it. On the other hand there are crocodiles in the river.’

‘I’m not worried over crocs unless you capsize the kayak!’

Oh, my big mouth! I have read canoeing articles from Africa and knew that the Nile Crocodile (Crocodilus niloticus) pays no attention to the boat and, in theory, as long as I’m inside I’m safe. On the other hand a croc might be tempted to grab a piece of meat that hangs low over the water and where do you think my paddle holding hand will be? Well, if anyone knows how to avoid having my hand low over the water while paddling I’d be happy to find out.

Anyway, since the only croc I had seen in Africa until then was the five foot chap in a pool by the nearby restaurant I desired to see one in its natural surroundings. An ultimate freshwater predator that for 100 million years felt no need to evolve any further, the Nile crocodile is the largest African reptile by far. It grows up to more than 20 ft and more than 2,000 lbs, it lives up to 150 years and it can survive a year and a half without food; no wonder I am fascinated with it. How can I not be?

A few paddle strokes down the river and on the right bank there were four Impala antelopes (Aepyceros melampus). A male with finely twisted horns was watching us suspiciously while females of his harem were drinking.

In front of us a Black Egret (Egretta ardesiaca) was fishing under the umbrella formed by its outstretched wings, cutting off the glare from the water surface and perhaps even attracting the fish into the ‘safety’ of the shade. Among 60 or so heron species in the world this is the only one using this peculiar fishing technique. Like a ritualized dance, it unfolds its wings, takes a peek, folds them and moves a few steps, then unfolds again…

I would not have minded having some shade myself. It was January, 2001, and here in the southern hemisphere January is the hottest of summer months.

South of the dam wall there was a shallow bay where branches of the flooded acacias reached toward the sky. They were decorated with Blue-cheeked (Merops persicus) and Southern Carmine Bee-eaters (M. nubicoides) using them as a high viewpoint to hunt dragonflies.

The surface was covered by floating leaves of the Blue Water Lily (Nymphaea nouchali), its large pinkish-white flowers reaching 25cm in diameter. Walking on the leaves with its elongated toes was the lily trotter, the African Jacana (Actophilornis africana) with its chestnut body, white breast and face and blue beak and ‘shield’.

Walking away from us was the Nile Monitor (Varanus niloticus), Southern Africa’s largest lizard. It readily digs up unguarded crocodile nests, creating havoc in no time. It can grow up to more than six feet but this one was only a third of that length.

To complete the scene the African Fish Eagle (Haliaeetus vocifer) was circling above us, yelping a triumphant high-pitched ‘Kyowkow- kow!’

‘By the way, how large are those crocs here?’

It was getting really hot… Perhaps the temperature had something to do with my inability to keep my big mouth shot.

‘Huh, you sound like you can show me that one?’

‘I’ll try. I know where it usually basks.’

Whatever happened afterward, I could not blame Andrew. I asked for it.

I remember a conversation with the bartender in the local yacht club some time ago. I was sipping an ice cold Windhoek Light (unlike South African, Namibian beers are highly recommendable), watching a vast expanse of the Gaborone Dam (starting a few miles down the river from my current position) and enquiring about the warning signs at the entrance.

‘Crocs?’ he said. ‘No, there are no crocs around here. I never saw one. I don’t know anyone who can honestly claim he did.’ Perhaps he was worried that the signs might be scaring his customers away but, being assured there was no crocodile to be seen, I decided there was no reason to return to his bar. 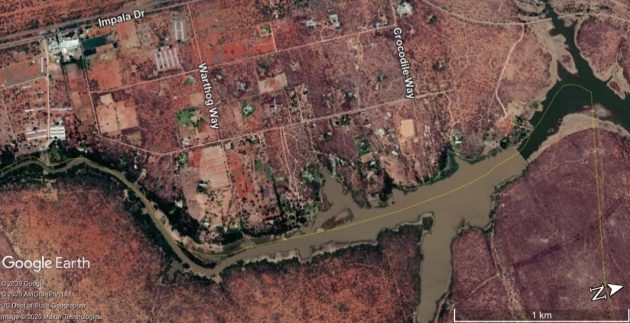 Later I met some trustworthy people. The lady living on a farm by the Gaborone Dam said ‘I saw a croc taking an egret.’

Her husband, a diving instructor, said ‘I wouldn’t dive in this lake.’

The gentleman living on a farm by the Ngotwane Dam said ‘A croc took my dog, right there!’

We were now paddling upstream where riverbanks narrowed to 40 – 50 feet. Tree crowns were swaying, branches rocking; a troop of Vervet Monkeys (Cercopithecus aethiops) was on the move and we were reaching for our binoculars.

The leader of the troop was sitting in a fork of a tree, barking at us angrily, warning his troop to stop moving. Vervets are highly vocal, using more than 36 different calls to indicate different dangers. How dangerous a life can be?

A female with a young hanging on her belly was caught in the mid jump from one bush willow to another, balancing with her long tail, but the rest of the troop slowed down, waiting for the danger – us, to pass.

Still, one juvenile had a seat on a branch, dangling its legs on one side of it and its tail on the other side, disregarding the authority of the leader and watching us curiously. There was something irresistibly childish in its curiosity. With such an attitude it might not make it to adulthood but I am sure it had a higher IQ than the rest of the troop.

‘Over there, in that reedbed,’ Andrew pointed toward an eroded left bank where a Boer camp stood more than a century ago. ‘That’s where that croc’s usually basking in the sun.’

One more stroke and the reed was swaying, breaking, bursting; something large was moving quickly. Swoosh, a heavy body was gliding down the high bank, splash, falling into the water and disappearing under the surface.

‘Which way did he go?’ I asked Andrew while the kayak was rocking on the waves made by the crocodile.

Then our kayak froze in the water. You know that feeling of heaviness, like when you lean on a submerged tree stump…

…or Andrew was repositioning himself in his seat…

Contemplating the food chain and my position in it, I kept my big mouth shut.

Cover: 20 years younger version of me

Published in the Canoeist, UK, July 2003 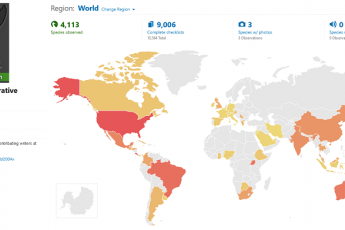