Okay, folks, today we will be discussing one of those internet pass-arounds which are meant to fill everyone with joy and inspiration, but which make wildlife rehabilitators look for the nearest wall against which to bang our heads. It’s a nice metaphor, but let’s just say it would not hold up in court. Here is the text, taken verbatim: The eagle has the longest lifespan among birds. It can live up to 70 years. But to reach this age, the eagle must make a hard decision.

In its 40’s, its long and flexible talons can no longer grab prey which serves as food. Its long and sharp beak becomes bent. Its old-aged and heavy wings, due to their thick feathers, become stuck to its chest and make it difficult to fly.

Then the eagle is left with only two options: die, or go through a painful process of change which lasts 150 days. The process requires that the eagle fly to a mountaintop and sit on its nest. There the eagle knocks its beak against a rock until it plucks it out. Afterward, the eagle will wait for a new beak to grow back, and then it will pluck out its talons. When its new talons grow back, the eagle starts plucking its old-aged feathers out. And after five months, the eagle takes its famous flight of rebirth and lives for 30 more years.

We sometimes need to get rid of old memories, habits and other past traditions. Only freed from past burdens, can we take advantage of the present.

I hate to be the bird geek who spoils the fun, but: 1) Eagles’ talons are not flexible. I know this because I once had one imbedded in me, and “flexible” is not how I would have described it.

2) Birds of prey ALL have bent beaks. That’s why they’re birds of prey, and not woodpeckers.

3) Every year (usually) eagles molt and grow a whole new set of feathers, whether they want to or not, but it’s a gradual process. Also, it’s cold on mountaintops, which would deter any sane eagle from picking out all its feathers and hanging around naked, waiting for them to grow back.

4) Captive eagles may be susceptible to mood disorders, but wild eagles are not. They are smart birds, with healthy self-images. They have places to go and fish to catch, which would not be possible if they were to remove their own body parts. Plus: what about infection? If they really were determined to bang their own faces against a rock until their beaks fell off, wouldn’t they want to swing by the vet’s office first and pick up some antibiotics? And maybe some morphine? A down coat might be helpful, too. Woolen booties. Ear muffs. I could go on.

5) And finally, birds are not like bears, who can put on an extra hundred pounds and chill out for five months. Eagles weigh about 12 pounds and have high metabolisms, so they need to keep up the food intake. Ten days of fasting, let alone 150, and there would be a serious problem looming.

It’s a nice story, sort of, but eagles don’t go through the process of rebirth. Just being an eagle is miraculous enough. 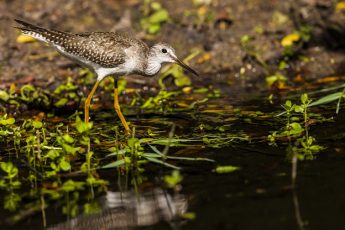 « Previous post
What’s in a Name: What’s in an Adjective?
Next post »
The Endangered Florida Bonneted Bat