We are finally getting settled this week, now that we are back from Costa Rica, and in what we refer to as our temporarily-permanent new home. Tucson Arizona is turning out to be a very birdy area. I have to admit I stole some parts of that phrase from the director of the Tucson Audubon Society, Jonathan E. Lutz. In a Thanksgiving note to all the members, he used that phrase, and I agree, the birding options here are pretty numerous. In our first week here, prior to our Costa Rica trip, we visited the Patton Center for Hummingbirds, covered here back in week 37. This week, I was able to get down to the nearly world famous Madera Canyon. Situated in the Santa Rita Mountains, south of Tucson. This amazing area has a widely varied habitat range, and the  variety of birds observed here,  in nearly 20 different eBird.org hotspots average almost 200 species each. For the most part, the difference in habitat is mostly dependant on elevation. As you enter the Madera Canyon area, you begin with low flat desert grasslands, then as you enter the canyon proper, becoming small streams bordered by oak woodlands. This changes  to a pine/oak mix and then a montane conifer forest as you gain in  elevation.

Like any area we have visited this year, it seems that the first visit is more of an exploratory outing, than a true birding day. Where are the parking spots, the best trails, time of day and last, but not least, where are all the birds? Then, with a better understanding of where we are going, we return and make a serious effort to find some birds. With that in mind, our first stop was at the Madera Picnic area, as it was an easy place to park, looked like good habitat and was reported to have some water running in that part of the creek. This is the part where I need to tell everybody about the highlight bird of Madera Canyon. There is rumored to be at least one Elegant Trogon living somewhere within the canyon, and is a prize observation of the diligent, and experienced birder for this area. Jeanne and I walked thru the picnic area, crossed over the small creek, and there on a nearby tree was this very bird. Now, bear in mind, I just left Costa Rica, where seeing a trogon is really nice, but not all that uncommon, so I don’t believe I was as awed as the occasion called for. Since reporting this “Rarity” on eBird, several locals have tracked me down to point out that they had made 2, 4 even as many as 8 trips to Madera looking for this bird, with no luck at all. This Elegant Trogon is shown below, and again in the second image down, after turning around so I could get the back plumages as well. 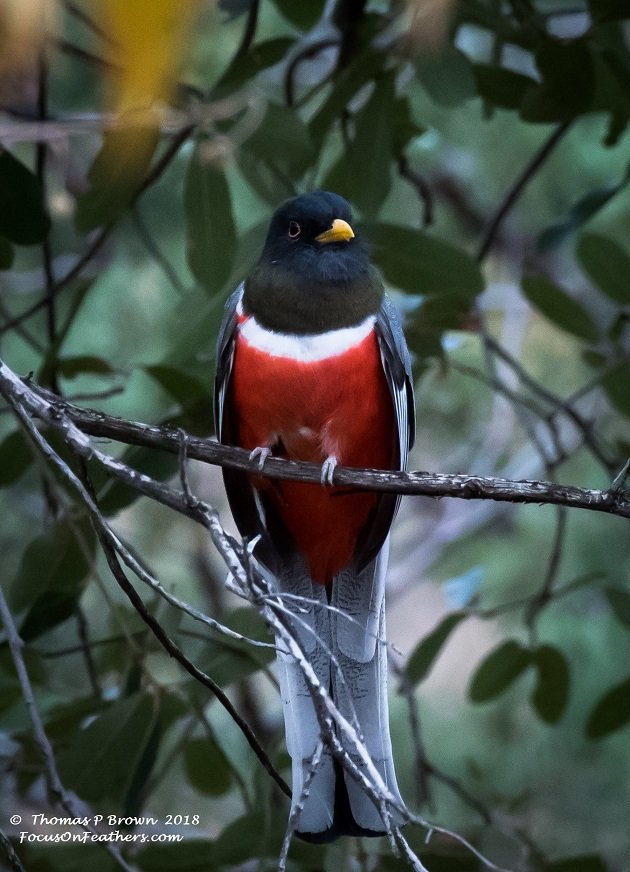 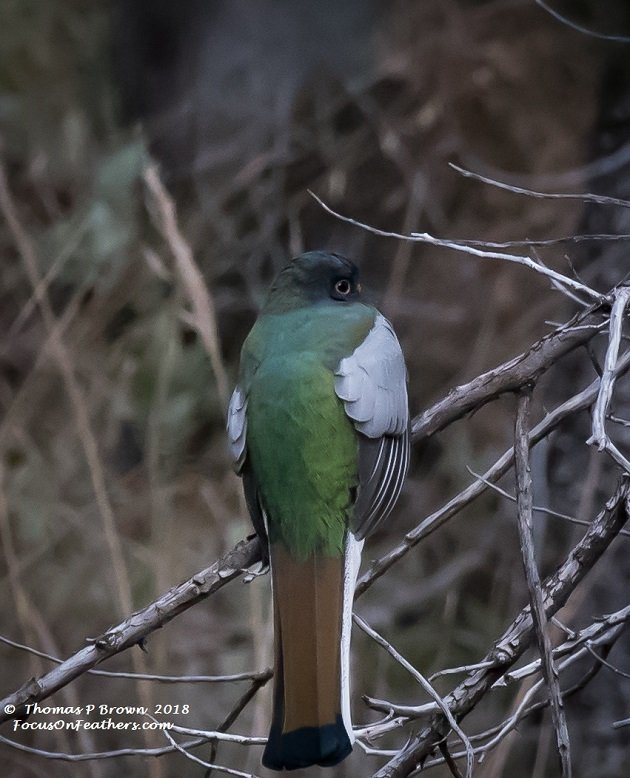 This same area had a very strong population of Acorn Woodpeckers. 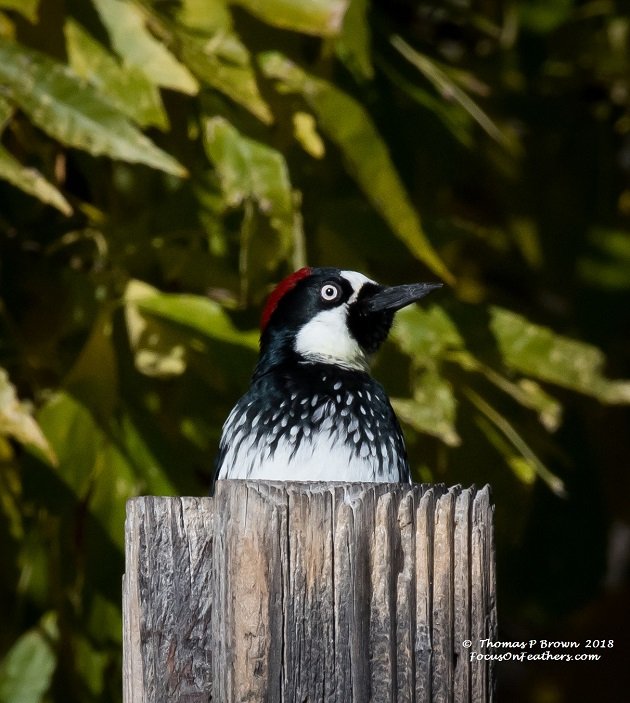 I got to see my first ever Arizona Woodpecker here as well. 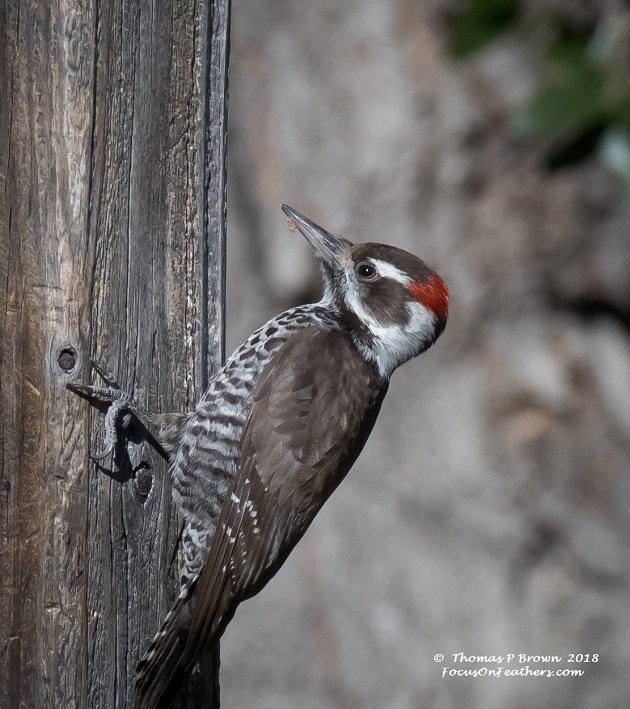 Another new Lifer that joined the list that morning was the Mexican Jay. 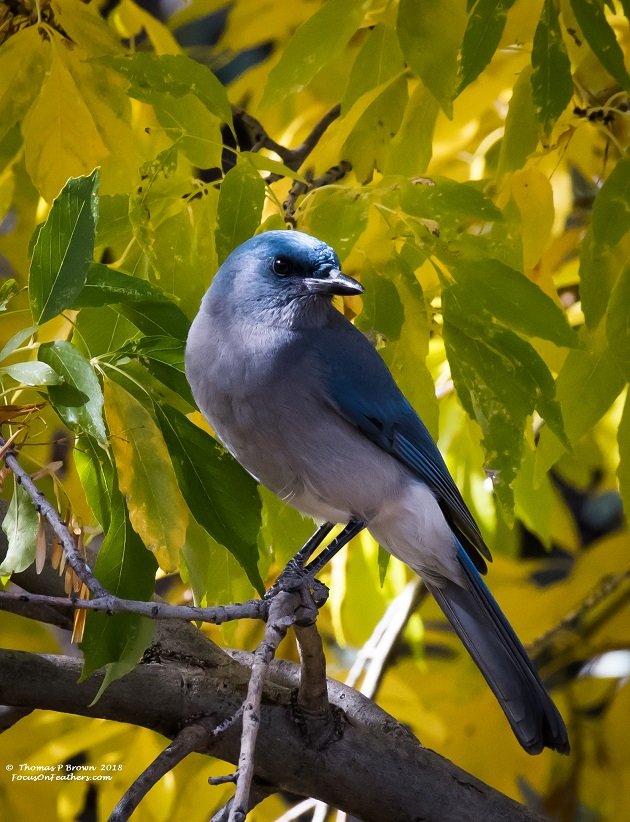 While I am on a streak, here is Lifer number three, in a 10 minute period, with the Yellow-eyed Junco.

The Yellow-eyed Junco was in a small group of Dark-eyed Juncos, all feeding on the oak forest floor. 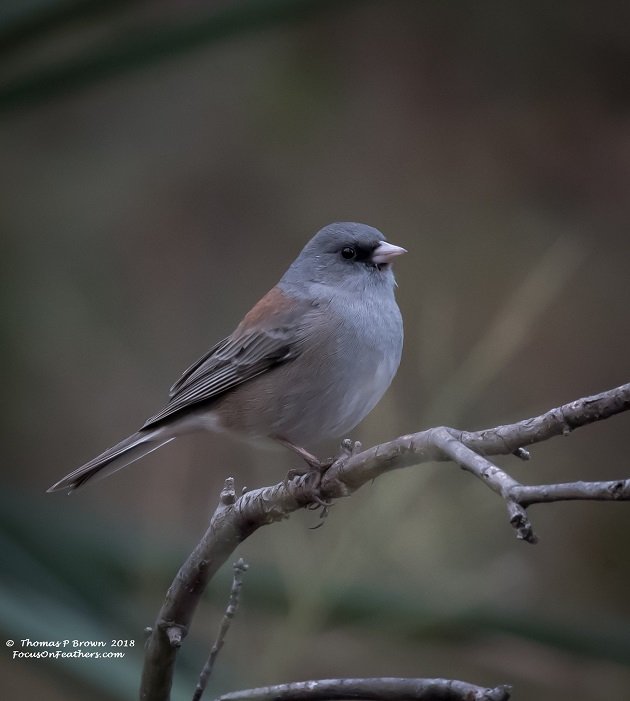 We then moved up the road just a few hundred yards, to the Santa Rita Lodge, well known for the feeding stations that have located next to their gift shop. Brandy was working in the gift shop, and was a great help with canyon information, bird locations and even a heads up as to when the Hepatic Tanagers and Painted Redstart might make an appearance.
As you can see, she was spot on with the heads up, as here in that Painted Redstart, 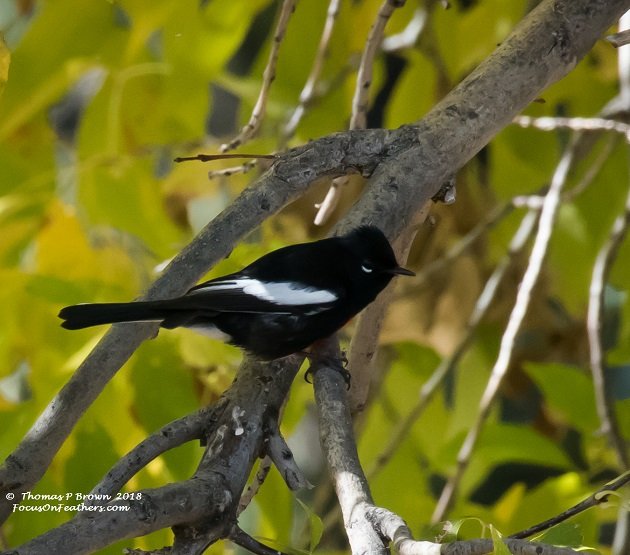 …and here is one of the Hepatic Tanagers. 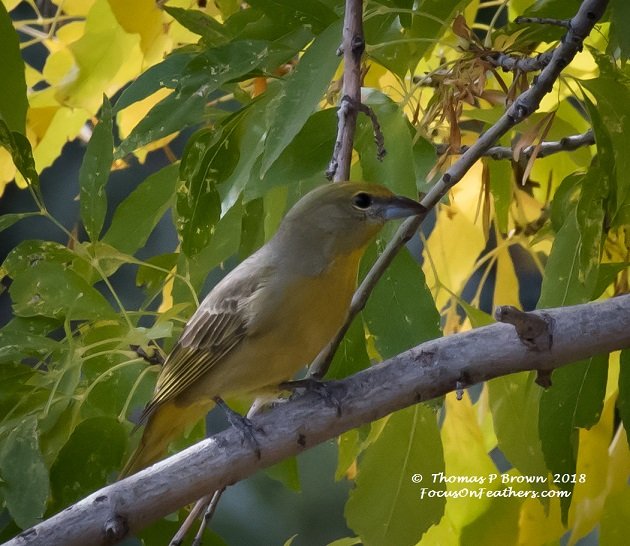 While we were at the feeding stations, we counted 26 Wild Turkeys, a couple dozen Mexican Jays, Chipping Sparrows, Bewick’s Wrens, 20+ Lesser Goldfinches, Pine Siskins,  and more of both the Acorn Woodpeckers and the Arizona Woodpeckers. There was also a couple of these awesome Bridled Titmouse’s. 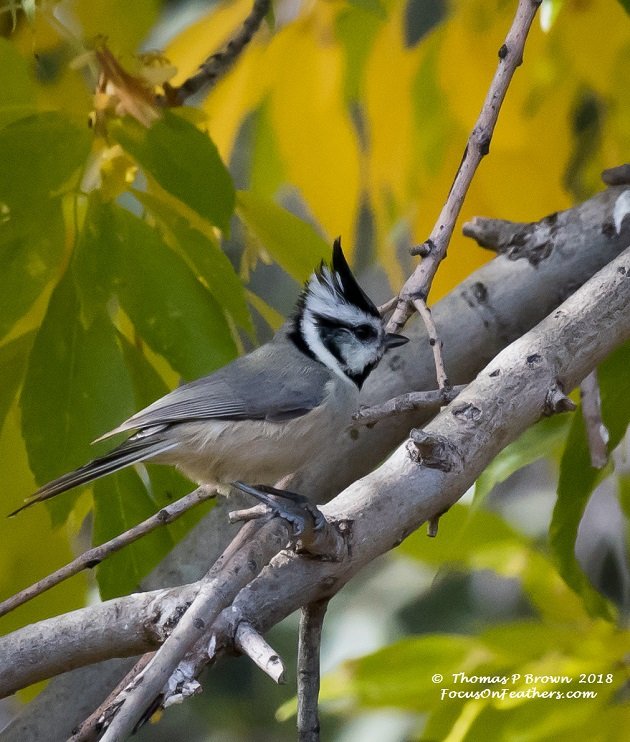 We also got a few nice pictures of the White-breasted Nuthatches. 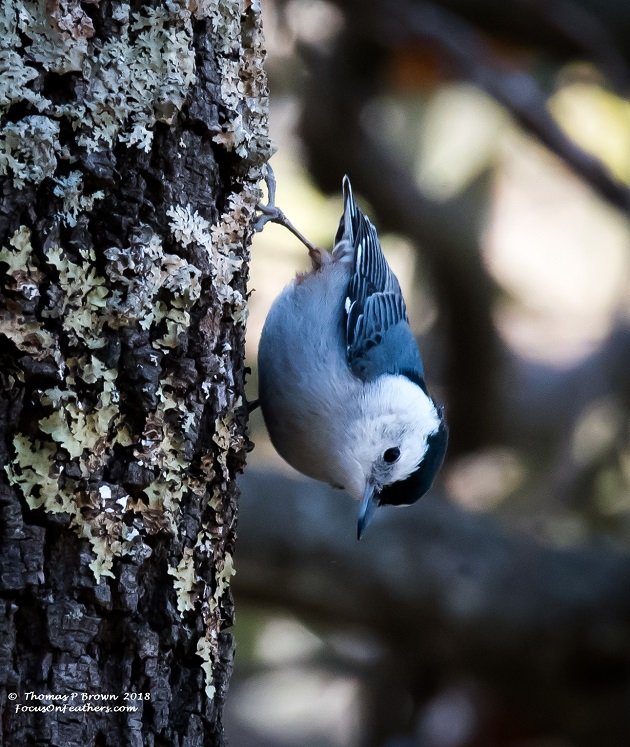 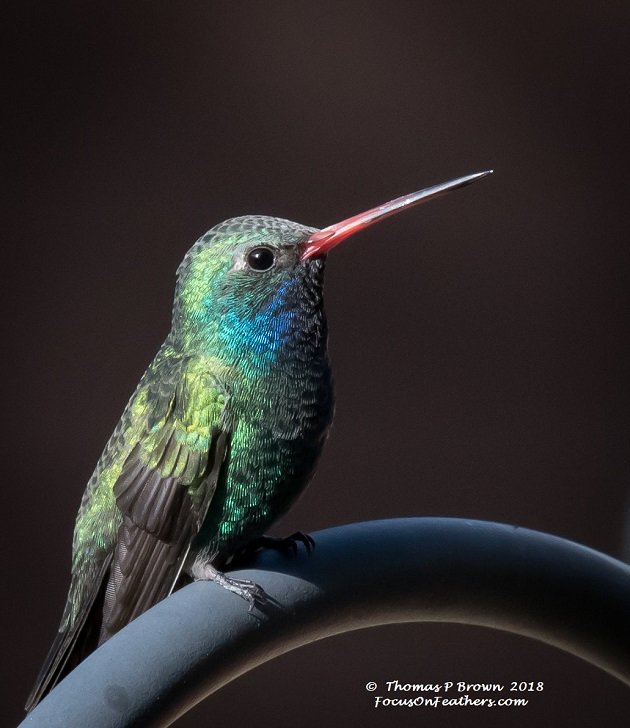 The next stop was at the end of the road, and the location of the trailheads that headed up into the higher elevations. Brandy’s tip about going up into the Carrie Nation Mine area was also perfect. This is the area where there is an intermittent creek. It will flow for a hundred yards or so, and then disappear, only to pop back up, a few hundred yards farther along the creek bed. Everywhere the water was on the surface, if you just sat down and where quite, several species would magically appear, as if out of nowhere. With the exception of a couple birds, most of these were repeats from the lower elevation. For me personally, adding the Olive Warbler to my Life List was a huge treat. 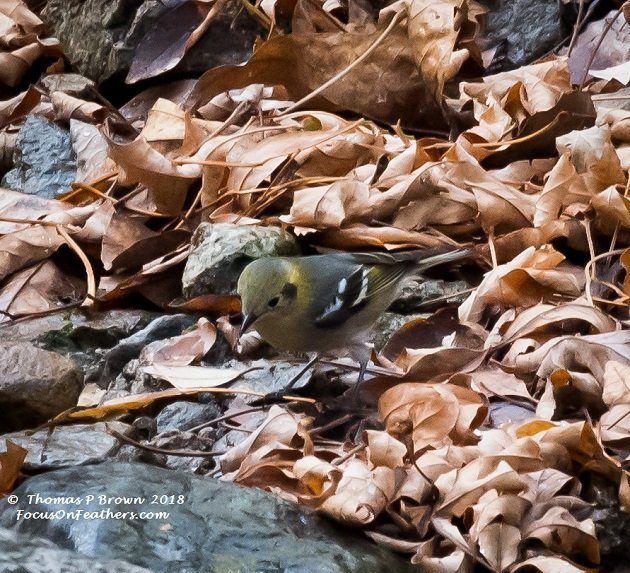 I also got to add the Great Pewee to the Little Big Year list. 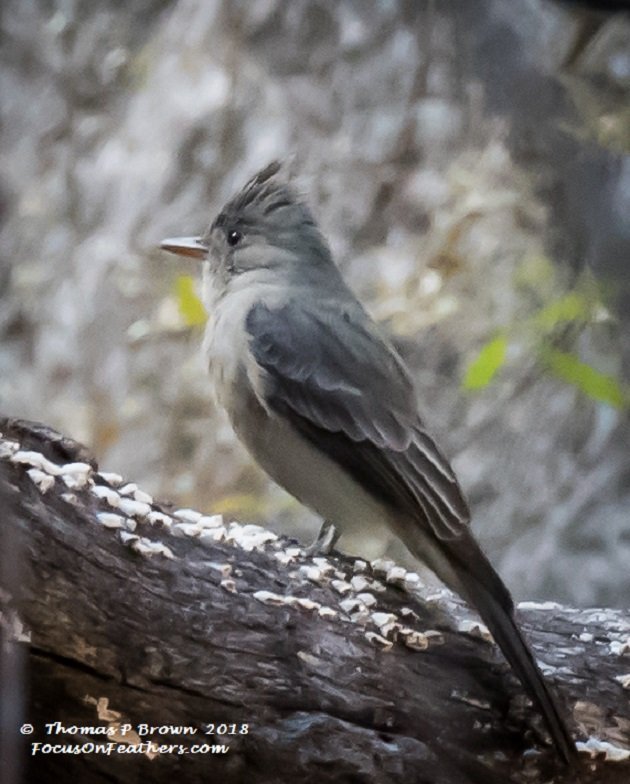 The last two birds on my wish list for the area were to found back in the lower elevations, at the edge of the desert grasslands. I was hoping to see the Rufous-crowned Sparrow, and the Black-tailed Gnatcatcher. We worked our way along the road, driving and walking several miles, until we reached Florida (Pronounced flo-REE-da) Canyon. The sun was getting low, especially  as we entered that end of the canyon located just to the north of Madera Canyon, but we finally found our Black-tailed Gnatcatcher. 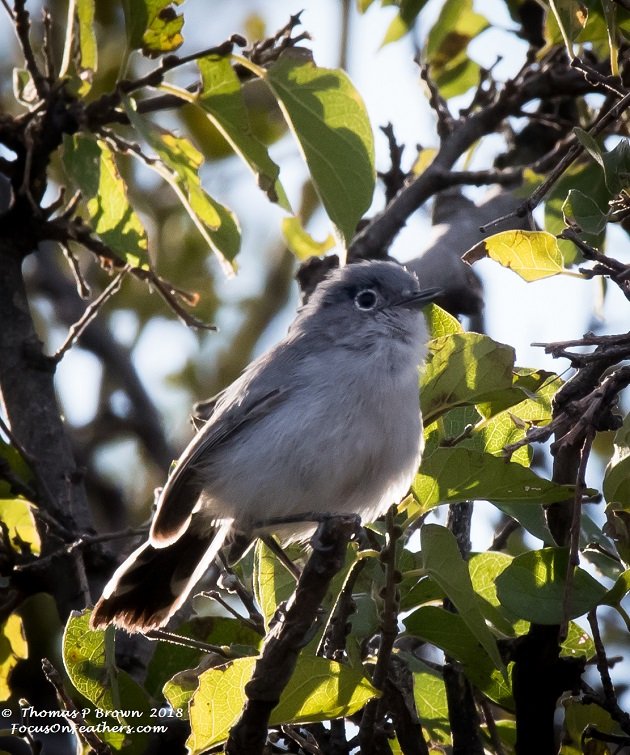 The Rufous-crowned Sparrow never did materialize, but wow, what a day, and what a place. This is a 75 minute drive from where we are keeping the 5th wheel, so I will be back here a lot!

With the addition of all these new birds, the numbers for the Little Big Year are as follows: