The stage is set for two rival gangs to fight over coveted territory: a grassy lawn bordered by a dirt road and a smattering of trees, surrounded by grassland and marsh.

At first glance, the Sandhill Cranes seem to be at an advantage. They’re taller, after all, with larger wingspans and sharper beaks. On the other hand, the Canada Geese have both safety in numbers and famously aggressive personalities.

That’s the match-up the graduate students and post-docs of the Cedar Creek Long Term Ecological Research Site saw play out every day this summer from their living quarters near the field sites. Cranes and geese weren’t alone – the 5000+ acres of the reserve are known for avian life, from Eastern Kingbirds and Eastern Bluebirds to Eastern Meadowlarks and Red-headed Woodpeckers. Still, few unleashed animosity towards each other on a regular basis. 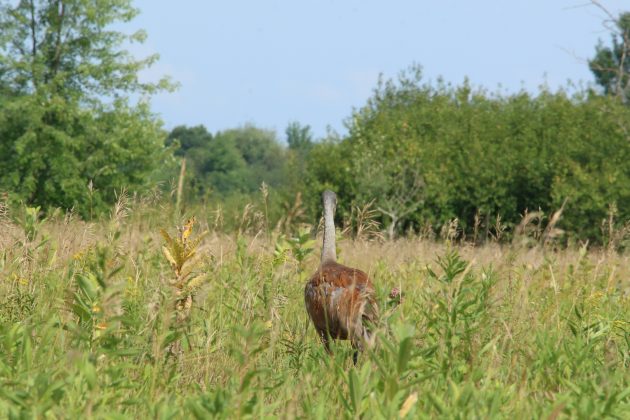 During my August visit, I bumped down the narrow road with one of the graduate students, our car slowing to a crawl as we approached an uneasy truce between the two sides. Only two cranes stood to take on the dozen or so Canada Geese, and from my vantage point it looked like the latter had the upper hand, hissing and wagging their tails if the larger birds got close. Eventually we had to drive past, and the Sandhill Cranes stalked off, disappearing into the tall, waving grass. Perhaps the battle was lost, but not the war?