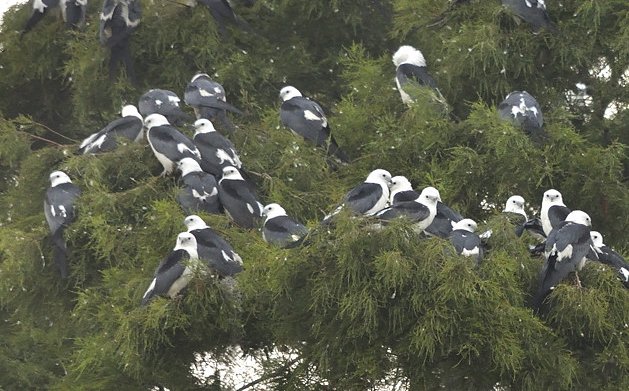 I am sure you know how it goes…when you are a birder, your friends (non-birders) will tell bird stories, anecdotes or ask questions about birds they have seen. A friend of mine told me, she has been seeing small groups of Swallow-tailed Kites (Elanoides furficatus) in the general area; in south Florida. This happened two days ago and I said to myself, I can’t believe August is here. I then proceeded to expand on her observation. This is the time when Swallow-tailed Kites congregate at what are known as migration roosts. The kites return to the same roost every year beginning in early July. As days progress, more and more kites join the roost until they reach a critical mass and then, as they built up the numbers, they begin to head south to their wintering grounds. In fact, Dr. Ken Meyer documented this phenomenon by monitoring some of these roosts. At one of the biggest migration roost in Florida, not far from where we live, kites begin to gather by mid June. By July 13 there were 910 birds, and by July 27, biologists counted 1,500 birds; the maximum number. By the August 1st, the number was about 1000 birds and by August 28 there were only 210 birds left. In about a week after the last count, no kite will be seen at or near the roost (Meyer 2004).

Interestingly though, the purpose of getting together before migrating south is unclear. One would expect, as other birds do, that the kites migrate in flocks. This is not the case. Birders and raptor observers in south Florida and the Florida Keys report only small number of Swallow-tailed Kites during migration time. Similar observation have been made in Cuba and the Yucatan Peninsula in Mexico where up to 47,000 migrating Mississippi Kites are counted every season as they fly south. As young of the year and adult Swallow-tailed Kites congregate in the Florida roosts one may think the purpose of getting together is to show the fledglings the route south. But adult birds leave first leaving the young behind although at the end of the pre-migration roosting period adult and young birds depart together. Swallow-tailed Kite near the Lake Okeechobee roost in Florida

Of all migratory birds breeding in North America, Swallow-tailed Kites are among the first to leave for the wintering grounds. Kites generally fly to Cuba and then over the ocean to arrive in the Yucatan Peninsula or areas further south. Then, they keep flying south overland to western Colombia. At some point in western Colombia the kites will fly over the Andes at a point where the Andes are not as high. Once on the east side of the Andes, they will continue south to southern Brazil arriving in the Pantanal area where they mingle with the resident population of Swallow-tailed Kites there. The local kites at this time of the year are about to start breeding. Somewhat complicated, but fascinating, the Swallow-tailed Kites one sees in South America could belong either to the resident or the migratory population.

The small group of kites my friend saw were probably heading to the roost or where already part of it. Kites flying in a small loose flock are the first sign of fall migration in Florida. Swallow-tailed Kites are also among the first migratory bird arriving to breed in the U.S. In a place like Florida, where sun and blue skies are the norm throughout the year, it is the first Swallow-tailed Kite I see that tells me that spring migration is around the corner. Soon after the kites all other migrants begin to show up in sunny Florida!

« Previous post
What is the Hummingbird Big Day Record?
Next post »
The Western Tanager Ranges Farther North Than Any Other Tanager