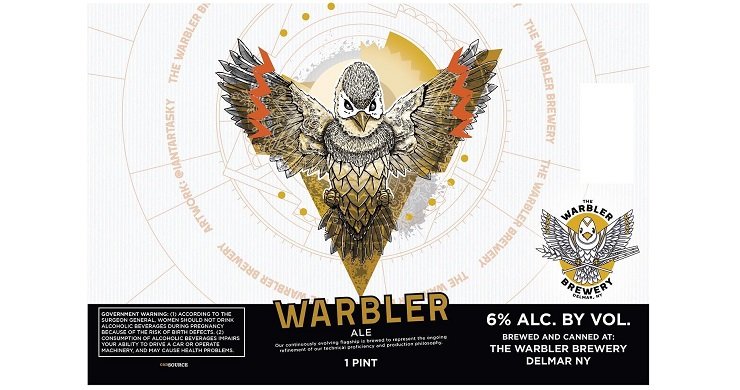 I didn’t plan on taking such a long break away from the Birds and Booze beat, but life got in the way the last several weeks, mostly on account of moving into a new home. After so much time away, I knew I’d need to come back with a really good find. And what could be better than a new bird-themed brewery opening up less than two miles down the road from me?

I first noticed The Warbler Brewery in the Albany, New York suburb of Delmar back in November, a little over a week before their grand opening the day before Thanksgiving. Even then, the brewery’s sign was in place, sporting a stylized but spiffy songbird in flight, clutching a stalk of grain and a brewer’s mash rake with its feet. According to the brewery’s website, “We named our brewery for the wood warblers native to Upstate New York’s neighborhoods and woodlands; at once small and secretive, but also wonderfully diverse and bursting with song.” I don’t know whether head brewer Chris Schell – a Delmar native with a decade of craft brewing experience – is a birder or not, but each beer is adorned with trippy, vaguely sci-fi depictions of birds by Boston artist Ian Tartasky, some of which seem to be identifiable to species.

Right now, The Warbler Brewery’s beers are only available for sale at their taproom. Their offerings include two IPAs, both in the popular New England style: Dissimulation IPA and Wolfjaw Double IPA. Café Flurpy is a sweet, so-called “pastry” stout and Moon & Back is a strong, imperial stout. On the lighter end of the brewery’s range are Alba Blonde Ale, Squeech Blackberry Sour, and Parula Pilsner.

Their namesake beer is an American pale ale named Warbler Ale. Besides the few warblers depicted in the mix of songbirds featured on Safe Flight IPA by the Kings County Brewers Collective we sampled in October 2019, I think this is only the second time we’ve seen a warbler here at Birds and Booze, a surprising situation given how popular this family is with North American birders.

According to The Warbler Brewery, Warbler Ale is “Our continuously evolving flagship ale is brewed to represent the ongoing refinement of our technical proficiency, materials sourcing, and production philosophy.” The Warbler Brewery is coy about the ingredients that went into this iteration of Warbler Ale, but it’s a beer that’s decidedly in the hazy, New England style of hoppy ales. Bright and fruity, with aromas of candied citron, pine, and ripe mango and cantaloupe, Warbler Ale boasts a bold burst of pineapple flavor, a plush mouthfeel, and loads of soft, cereal sweetness offset by the faintest hop bitterness in the finish. Through the alchemy of brewing, Warbler Ale carries the flavors of the tropics northwards to our still chilly climes, much as the tiny songbirds it’s named for will adorn our forests and fields with their striking colors and cheerful, sparkling songs in just a few short weeks.

Where Are You Birding This Third Weekend of April 2010?