The Perils of Feeders

Sometimes, I feel that competing bird conservation groups are trying too hard to get my attention and give the impression that just by sitting here on my futon and breathing, I have killed several birds. I just looked over at my husband–bam 5 birds dead.  I’m now petting my rabbit Dougal, 6 more birds dead. OK, that is extreme, but what’s really slicing my Twinkie right now is an article from the Ottawa Citizen about a report from the journal Wildlife Research which projects that 22 million birds die across Canada every year after flying into windows of residential homes and that yards with feeders seemed to have more collisions. Funny thing, the study was about people who noticed collisions…hmmm, could people who have bird feeders be more likely to notice birds hitting windows than people without them? I don’t deny that feeders can cause bird deaths. Hawks (or Merlins like the above bird eating a Red-bellied Woodpecker) come to feeders but they would be killing birds whether there is a feeder or not. And I put feeders up all over the place: my home, my work place, friend’s houses and birds hit windows…but usually because an accipiter like a Cooper’s Hawk drives them into windows.

But feeders that are never cleaned are just as dangerous, as are cheap feeders that can fall apart or say using seed that a major manufacturer knowingly sold even though it had a pesticide known to be toxic to birds in it. But what really gripes me is that not everyone puts up bird feeders, there are other ways of attracting birds like water features or putting in trees, shrubs and plants that attract birds or bird houses.  So, should we tell people not to plant anything like snowy mountain ash that the above White-throated Sparrow is eating on its migration south? Never put up a bird house?

I get that we need to look and see how humans affect birds and things we construct like glass covered skyscrapers, wind farms and cell phone towers can kill a lot of birds, but is going after yards with bird feeders the best way to go about it? And quite frankly, is constantly sending out alarmist headlines the best way to get a birder’s attention? 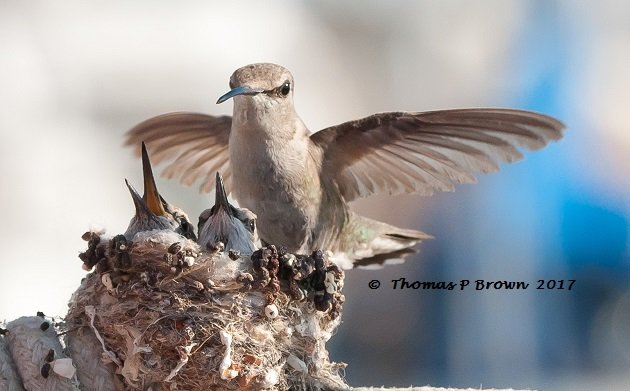 The Nesting habits of Costa's Hummingbirds

Where Are You Birding This Third Weekend of December 2010?