Found myself at Tibbetts Brook Park in Yonkers this weekend. Actually, I was there twice, as Mason loved the park, especially the small waterfall, so much the first time that he dragged me back the next day. The birding was painfully slow there. I’ve had decent success from spring to fall at Tibbetts Brook, but right now, every duck is a Mallard and every gull a ring-bill. Canada Geese, Mute Swans, and Double-crested Cormorants inhabit the park year round. One doesn’t visit just to see them, but rather to get a glimpse of whoever else might be in attendance. Besides these oh-so-common species, the only birds about were newly arrived White-throated Sparrows and Dark-eyed Juncos. Juncos have been around for a few weeks already, but white-throats are just making their presence known. These distinctively beautiful and hardy sparrows dominate during their season. I’m already seeing them in every bush.

My best bird sighting surprisingly occurred in the most urban environment possible. My sister just moved down to the NYC neighborhood colorfully known as Hell’s Kitchen. During our visit, we dropped in at a local playground. Of course, we noted the usual city birds like Rock Pigeons and House Sparrows, but also cardinals and white-throats. Observing a woodpecker flit into a tree, I immediately assumed Downy or Red-bellied, as these are our two most reliable winter peckers. To my pleasant surprise, this bird was neither, but was in fact a Yellow-bellied Sapsucker. This wonderful woodpecker is, if the intricate holes tracing every inch of bark in the bird’s selected tree is any indication, a local resident. Next time I’ll bring my camera.

One interesting aspect of my experience with yellow-bellied sapsuckers is that nearly every one I’ve every seen has been in midtown Manhattan. I believe I spotted one in a supernal New Hampshire wood back when Sara and I first took up bird watching. Every one since has been in Central Park or somewhere near by. This last sapsucker was at least ten blocks from a decent stand of trees. I bet he’s pretty tough… 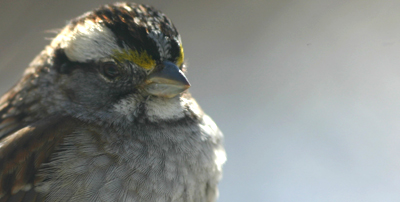