Sometimes I feel like I lived a charmed life.  On Saturday, which is not my actual birthday but is when Daisy and I both had time to celebrate my birthday, Daisy told me that we had to go to Manhattan to get my birthday present.  Not only would she not tell me what the present was but she wouldn’t tell me where we were going.  Well, I like surprises as much as the next person and this idea had me intrigued.  Once we got off the E train at Lexington Avenue I started looking around to see where it was we were going.

Dunkin’ Donuts?  No.  A touristy souvenir shop?  No.  Wait, why are we going in this office building when we just walked past a camera shop?  Ah, that clever Daisy, misdirecting me by going into the office building and then going back out and entering our actual destination, the next-door camera shop!  But what did she get me at the camera shop?  Wait, what?  One of whatever I want?  Swoon…

Once I was revived I reviewed my options.  The choices came down to an external flash and a 60mm macro lens.  Because I don’t like using flash too much I decided on the 60mm, both because my 100mm macro lens is my favorite lens ever and because I figured I could experiment by digiscoping with the macro lens, rather than continuing to use the 50mm lens that, while cheap and capable, is just not that great a piece of glass.  The macro lens is sturdier and just plain nicer than the 50mm lens, and, now that I have a second macro lens, I can let my mom and brother borrow the 100mm lens on occasion without feeling unprepared if I come across a cool-looking bug.

But how does the Canon EFS 60mm f/2.8 Macro USM lens take pictures when attached to a digiscoping rig?  Amazingly well!  I tried the lens out attached to my Swarovski rig on Sunday at Flushing Meadows Park where I was assured of a host of common birds on which to focus.  What I found was that it was a bit more difficult to get the focus perfect but when I did I really liked the results.  I also lost a little bit of shutter speed versus the 50mm (because the 50mm can get to f/1.8).  While I like the results I’ll let you judge by sharing two shots, one of an American Black Duck and one of a European Starling. I also amused myself by trying to get shots of the horde of Ring-billed Gulls in the area in flight.  Digiscoping can be difficult enough without adding the element of movement on the part of the birds and I failed to get any shots that are worth sharing.  I did, however, manage a decent shot a gull leaving the water. But the stars of the short expedition around Meadows Lake were the trio of Hooded Mergansers, two drakes and a hen, that kept putting themselves in front of me in pretty good light.  I got shots of them from a variety of distances and angles, and would have taken even nicer photos but when they were closest and in the best light they, no fools, were screened by tall phragmites. The next shot of a drake Hooded Merganser shaking its head confuses the heck out of me.  Its body and bill are perfectly clear and not moving but it shook its head as I took the shot.  I don’t understand how this is possible (have you ever tried to shake your head without moving your nose?).  Does anyone have an explanation as to how this is possible?

Anyway, it fells kind of odd to be half-reviewing a lens without having actually officially reviewed the digiscoping rig in its entirety…but I will get to that eventually.  In the meantime, enjoy this shot of B.B., one of our indoor cats, who was pretty bored by the whole photo-taking process (I figured you might want a look at how the lens is when it is not attached to a scope). 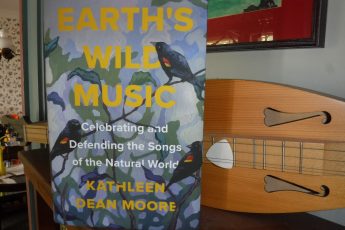