Late Saturday afternoon a Tundra Swan was reported from the south end of the East Pond at Jamaica Bay Wildlife Refuge. A regional rarity around New York City, Tundra Swans are only regular at Hook Pond in Suffolk County, way out on the eastern end of Long Island. I’d only ever had two encounters with Tundra Swans in Queens, one in November of 2006 and a flock of thirty-three, believed to have been forced down by a storm, in November of 2014. I was psyched to see the one that had been reported but first I had to do some other birding on Sunday morning to keep my year list moving along. Once I got my trip out to Breezy Point (four year birds!) and a visit to Big Egg Marsh (one year bird!) done I headed over to Jamaica Bay.

Oh well. I put my eye to my scope and started scanning the ducks, picking out a couple drake Northern Pintails and a Hooded Merganser amid the Mallards, Northern Shovelers, and American Black Ducks. Then I started on the gulls and, wait, what? The Tundra Swan was hiding behind them the whole time? Yes! 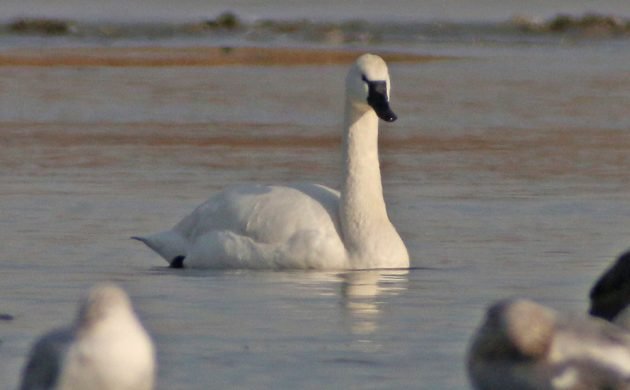 The Whistling Swan (the American type of Tundra Swan as opposed to the Eurasian Bewick’s Swan) is the basic swan. No bells or whistles…er, no fancy field marks on this bird.

I watched the swan for awhile, occasionally being distracted by Snow Geese flying over, a Northern Flicker calling from nearby, and other birdy distractions. The swan fed and preened and generally acted like you would expect a swan to act. 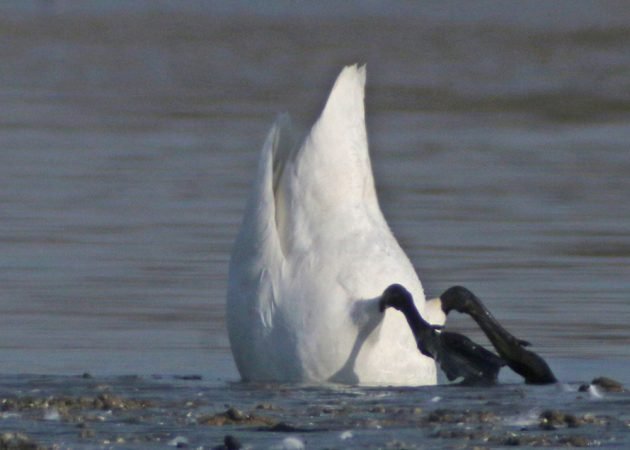 I didn’t see any of the dabbling ducks dabble. I assume the water was too deep. But both species of swans present had enough neck to reach something to eat on the bottom of the pond.

Then, lucky me, the Tundra Swan got out of the water and onto the ice near a Mute Swan for some nice side-by-side size comparisons. 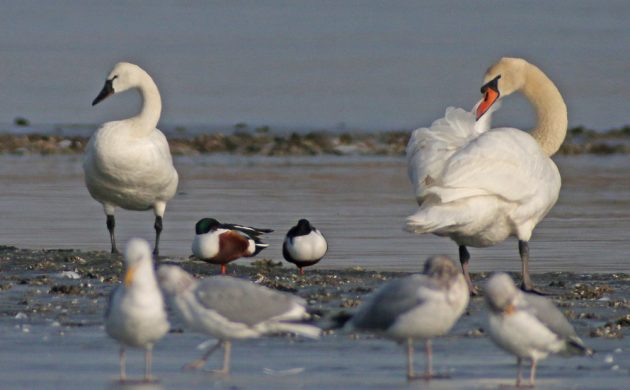 Mute Swans are larger, heavier, and longer necked. If the Tundra Swan was a Trumpeter Swan (the only other swan it could be) it would have been essentially the same size as the Mute Swan. 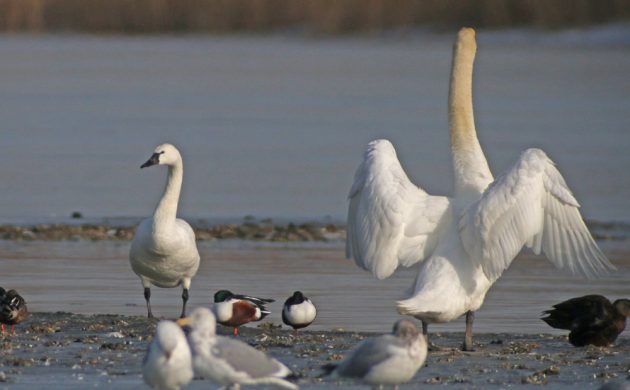 Yeah, this is a Tundra Swan.

Not bad for a twenty-minute twitch. I got my bird with a minimum of drama, got to spend some time with it before other birders got out there, and it stuck around for other birders through the end of the day. If only they were all so easy!