It was Bryant Park that got me thinking. Everyone knows about Bryant Park… but what if you didn’t? Who would think to look for Ovenbird and American Woodcock there? Or even Hermit Thrush for that matter?

It’s not an original thought that there must be other parks out there that hide treasures. Every western dove and flycatcher that turns up along our wind-swept coast came there from somewhere; every alcid that somehow makes it to Wisconsin likewise, but in reverse. Desperate birds notoriously take desperate measures.

So when I noticed that Socrates Sculpture Park had never had a single eBird checklist submitted, I decided to fix that. It isn’t a very promising park, to be sure – it’s loaded with art, and everyone knows that birds hate art, or maybe they hate the feral cats that live under the art (probably the latter.) People walk their dogs and do yoga there. But late fall is a time of year when none of that seems to matter, and who knows – maybe I could get just as lucky as Corey.

As I arrived, I immediately heard the wingbeats of Mourning Doves and the call of a Northern Mockingbird. Expected, but still lovely native species that liven up our urban spaces. A handful of Dark-eyed Juncos and Song Sparrows were soon evident, and of course Ring-billed and a single Herring Gull along with the Mallards and Gadwall in the river.

I scrutinized the Mourning Doves, but none of them were anything but mournful. A single Golden-crowned Kinglet foraged through the weeds. I gave the stink-eye to the obviously well-fed cats. The park is not large, and I decided I’d exhausted its possibilities – but as I turned to go, a large raptor came sailing in and landed in a tree.

As hard as I tried to make it into my first Queens Goshawk, it was in fact a young Northern Harrier. Which, in that particular place, was not much less surprising. After composing itself for a little while and throwing the Mockingbird into some consternation, it took off in the direction of Randall’s Island, where no doubt it would feel much more at home.

So, no rarities to speak of, but the Socrates Sculpture Park does at least now have a checklist. And who knows what might turn up there in the spring… 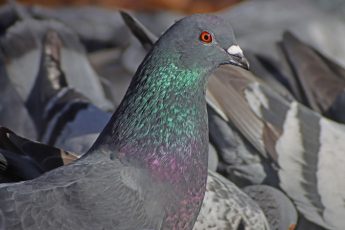 « Previous post
Hummingbirds in Costa Rica Love the Rain
Next post »
Where Are You Birding This Second Weekend of December 2014?