Waking up in a new country always has the potential to be profoundly memorable. I slipped into Panama under cover of night, consequently eluding the House Sparrows, grackles, and gulls that compete to be one’s first “trip bird.” I slept comfortably but fitfully, eagerly awaiting the break of day atop the world-famous Canopy Tower. After all, greeting the dawn is a big deal in a lodge that offers 360-degree views of an unnervingly diverse rainforest canopy. So it was that I rushed out of bed when the sun was but a rumor and all of Panama’s 950+ species were in unspoken competition to be my Panamanian first. Fortunately, the Tower staff rose even earlier to lay out coffee of the high quality one becomes accustomed to in Central America. Well fortified, I took to the top of the tower. Within moments, a Collared Aracari greeted me below eye-level from atop a tall cecropia tree. Talk about lucky to start the day, not to mention a trip, with a toucan! I’ve seen Collared Aracaris before and I’ve seen Palm Tanager, the titular Thraupis tanager of the region, before as well. New to me was the third species of this nascent day, Plain-colored Tanager. A flock of four of these tiny, chattering birds cavorted like Mini-Me versions of the larger but no more laconic Palm Tanagers. Next came Keel-billed Toucans, veritable kings of the canopy. When your progress is preceded by the likes of their prismatic probiscuses, people take notice! Equally difficult to ignore was the unholy cacophony raised by Red-lored and Mealy Parrots in distant flocks. Smaller birds began to make the treetop scene. Brilliantly colored Blue Dacnis and Green Honeycreeper were both welcome sights, but I inexplicably took greater pleasure in an exotic flavor of a more familiar family in Tropical Gnatcatcher; this bird sounds a lot like its northern cousins. And while we’re on the subject of pleasure, what could be cooler than my first Three-toed Sloth slumbering (what else?) in a nearby tree? Three-toed Sloth living up to its name

Above all this action, Lesser Swallow-tailed Swifts wheeled and turned while hummingbirds at the base of the tower roused in the rapid heat of the day. In the distance, a massive container ship carried cargo slowly through the Panama Canal. Beyond lay a new nation for me to explore. Downstairs in the kitchen, breakfast was cooking. This was going to be a great day… 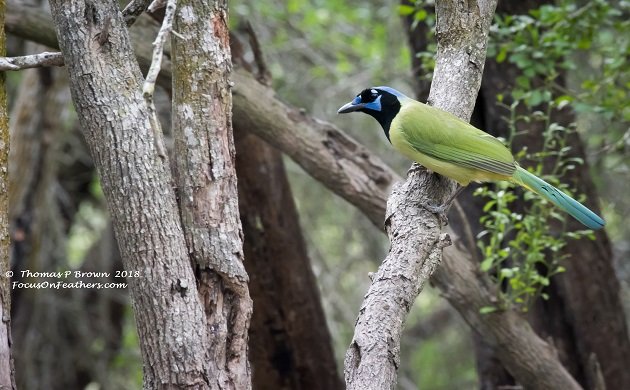