Mason and I, in the course of running errands, dropped in as we often do at Tibbetts Brook Park in Yonkers. Last month, Tibbetts Brook was great for Green Herons and other assorted waders. Right now, the pond population is transitioning from summer shorebirds and waders to winter waterfowl. Mallards and American Black Ducks are always a cinch to spot here, as are Canada Geese, Mute Swans, and Double-crested Cormorants. But a small cluster of Northern Shovelers, still sporting eclipse plumage, signaled a seasonal shift.

While keeping one eye on Mason’s adventures along the grassy shore, I scanned the water for further evidence of winter’s onset. Settling in on a bird so bright one could barely miss it, I was pleased to note the impossible mix of magenta, scarlet, hunter, chestnut, buff, and midnight that makes up a male Wood Duck in breeding plumage. A Wood Duck at Tibbetts Brook is hardly unexpected, as I’ve observed Aix sponsa here in every season. However, as I continued to survey the area, more and more of these ducks appeared. Within moments, it was clear that more than 20 Wood Ducks, evenly split between dappled hens and garish drakes, congregated at the other end of the pond. There I stood, torn between marvel at the flamboyant spectacle ahead and remorse that I’d left my camera home, while all around me, joggers and dog-walkers appeared oblivious to the fact that one of the world’s most conspicuous ducks massed in unprecedented numbers! 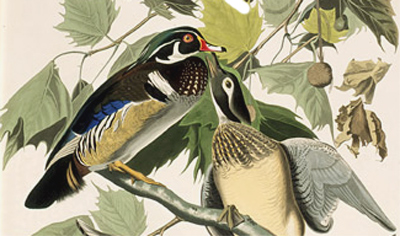 Another reliable sign that I need to get started on my holiday shopping is the appearance of the last wave of warblers. Of course, by this I mean Yellow-rumped Warblers. I know that other passerines were around, having spied titmice, chickadees, waxwings, and both kinglet species in the tall trees, but it seems like everywhere I looked, every small bird was a butter-butt. The Belted Kingfisher rattling across the water, the earnest Eastern Phoebe fattening up on flying insects, even the bright yellow Palm Warbler pumping its tail… none of them can compete with the myriads of Myrtles. When Dendroica coronata descends en masse on your neck of the woods, learn to love their robust, adaptive ways because I can guarantee just about every bird you’ll see will be streaky, smudgy, and slathered with gold.