Out of just under 200 bird species I observed this year in SE Europe, there are 6 threatened species. Some of them were always uncommon in the region, others are highly localised, some are hard to notice among thousands of similar birds, but others were abundant recently and one of them still is, despite the decrease in numbers.

For example, I simply cannot comprehend how such seemingly common species such as the Common Pochard (yes, for the third time, the common), still allowed for shooting in Serbia and many other countries, found its way into the Red List of Threatened Species.

There are many reasons for their decrease and yet, all of them (but one?) point to just one problem source, one over-abundant and highly invasive species – Homo sapiens. Us.

The Lesser White-fronted Goose is not only rare in Serbia, but also overlooked among numerous Greater White-fronted Geese. I dipped it once before and only this autumn found them in Greece. 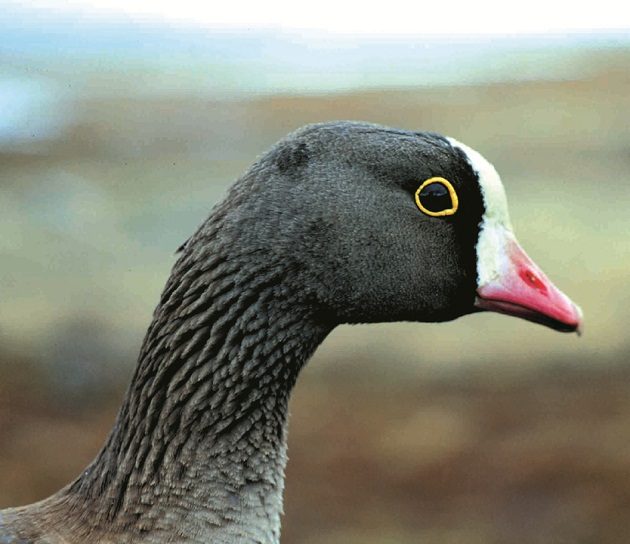 “This species’ population is suspected to have decreased rapidly, owing to levels of hunting on the staging and wintering grounds, and habitat deterioration (largely as a result of land cultivation). The decrease in numbers has been accompanied by fragmentation of the breeding range and is continuing to affect all populations.

“Disturbance on breeding grounds (e.g. from increasing tourism and angling) causes much disruption to nesting birds. Illegal spring hunting and round-ups of moulting birds are taking place on the Russian breeding grounds and illegal shooting continues in Norway. In the Western Palearctic at least 20-30% of the population are shot each year, often accidentally during hunting of other species.” (Adapted from the IUCN/BirdLife International Red List)

The Velvet Scoter can be called rare anywhere in Serbia but in Belgrade where it is merely uncommon and low-numbered, yet, present almost every winter and I have been used to them since my early birding days.

“Moulting and wintering concentrations of this species are very susceptible to oil spills and other marine pollutants (an oil spill could destroy a large proportion of the global population if it occurred in a key moulting or wintering area). The species is also susceptible to the effects of commercial exploitation of marine benthic organisms and shellfish, and is threatened by drowning in fishing nets. It is threatened by habitat degradation as a result of the human exploitation of natural resources in the taiga and lower tundra regions of its breeding range, and by lake drainage for irrigation and hydroelectric power production (Armenia).” (The IUCN/BirdLife International Red List)

The Common Pochard is not just a scarce breeding bird, but the second most numerous wintering duck in Serbia and it will be a hard battle to protect it against the strong hunting lobby. Oddly, for some reason it seem to be losing the battle of the sexes and when I counted them last winter, males were two to three times more numerous than females. 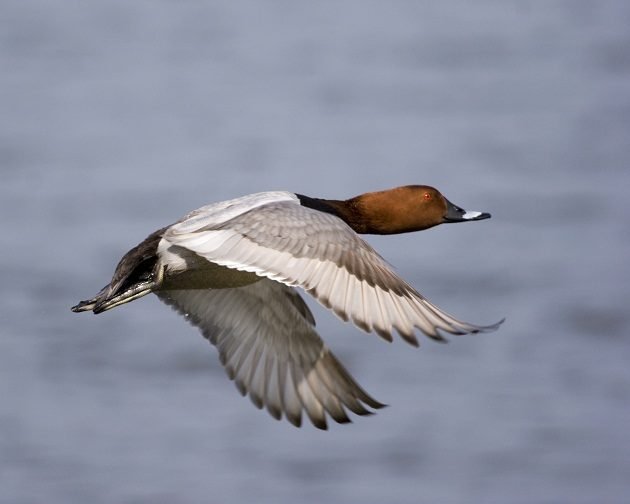 “The overall population trend is decreasing, although some populations may be stable and others have unknown trends. In Europe the population size is estimated to be decreasing by 30-49% in 22.8 years (three generations).

“The species is threatened by disturbance from hunting, water-based recreation and from machinery noise from urban development. It is also threatened by habitat destruction on its wintering grounds due to eutrophication (partially as a result of nutrient run-off from agricultural land).” (The IUCN/BirdLife International Red List)

I live in the second biggest city in the Balkans (Athens being the first) and Turtle Doves are understandably uncommon at its outskirts, although I did manage to record them only a mile from my home. They are under very heavy hunting pressure in Serbia and after 15 years of campaign, are finally off the shooting list. But, lacking the law enforcement in the field, nothing has really changed. 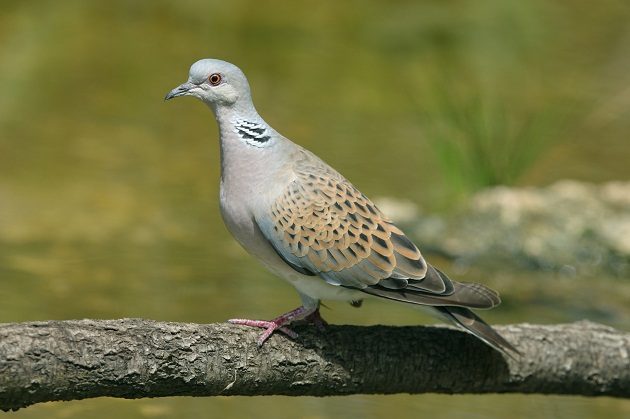 “The population is suspected to be in decline owing to ongoing habitat destruction and unsustainable levels of exploitation. In Europe the population size is estimated to be decreasing by 30-49% in 15.9 years (three generations).

“Transformation of agricultural land, including destruction of hedges, is thought to be an important factor in the decline of this species as well as the loss of semi-natural habitats. Changes in agricultural practices have several impacts on the species, as they can both reduce food supply and nesting habitat availability … Widespread use of chemical herbicides appears to also be a very serious factor, with a consequent decline or elimination of many food plants. Hunting is also significant during migration and in its wintering range; with an annual toll in France computed at c. 40,000 birds.” (The IUCN/BirdLife International Red List)

In my native Serbia, pelicans are only vagrants, although in the under-birded southeast, they may be more common than we think. They do breed in the Balkans, in Montenegro and Greece where I observed them, as well as in Bulgaria and Romania. 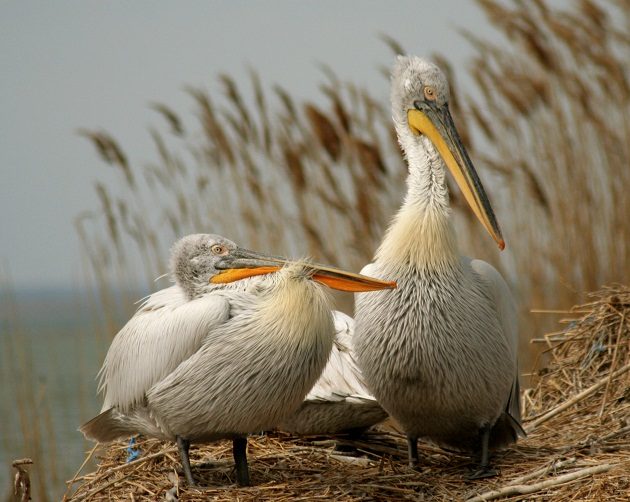 “Although some sub-populations have shown recent increases (including in Greece, Montenegro, Albania, Bulgaria, Russia and Turkey), this species’s population is suspected to have decreased rapidly over the last three generations…

“Former declines were primarily caused by wetland drainage, shooting and persecution by fishers. Cases of illegal shooting are still reported (…in 2009 in the Danube Delta) and hunting is considered one of the main threats for the east Asian population. Other continuing threats include disturbance from tourists and fishers, wetland alteration and destruction, water pollution, collision with overhead power-lines and over-exploitation of fish stocks.” (The IUCN/BirdLife International Red List)

The Greater Spotted Eagle mostly breeds from Ukraine eastward and in Serbia is only a rare but regular wintering species (several birds are recorded every winter). Yet, while I observed them previously in Gujarat, I found my first Western Palearctic one this year in Greece. 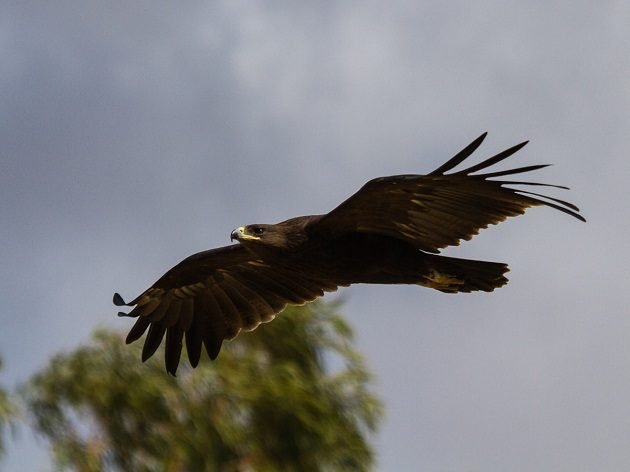 “This species is suspected to have undergone at least a moderately rapid decline over the last three generations as a result of habitat loss and degradation throughout its breeding and wintering ranges, together with the effects of disturbance, persecution and competition with other predators.

“There is strong evidence of hybridisation between this species and Lesser Spotted Eagle Clanga pomarina. In some European countries mixed pairs can constitute 50% of Greater Spotted Eagle pairs or even more. … Other key threats are habitat destruction and disturbance, also poaching and electrocution can be considered important.” (The IUCN/BirdLife International Red List)

These six species are our mine canaries. And they are telling us the story of the planet that we share. Among the 10,960 extant bird taxa recognised by BirdLife International, there are 1460 threatened species, or 13.3%. Almost half of them, 673 (6.1%), are in the two “endangered” categories (EN and CR). These 1460 birds are telling us that we are in the sixth extinction, caused by us and our activities.

We, humans, seem to be quite hostile neighbours to other life forms around us. In the early 1940s, when Jim Tanner collected the funds to buy and protect the Singer Tract, the last stronghold of the Ivory-billed Woodpecker, the representative of the Chicago Mill and Timber Company told him boldly and openly that they “are not concerned, as you are folks, with ethical considerations.” “We are just money grubbers.”

In more than 70 years since that conversation we have lost a few dozen species for good. There are 29 species listed as Extinct in 2016 for which the year of extinction is estimated as 1940 or later. There are also a further 16 species that are currently listed as Critically Endangered (Possibly Extinct or Possibly Extinct in the Wild) where the best estimate of an extinction year is 1940 or later, and another 5 species that have become Extinct in the Wild since 1940 (Andy Symes/BirdLife International, pers. comm.).

What has changed? Industry now heavily invests in greenwashing and its representatives today do not speak out so frankly. Is that the best we can do?

True, various conservancies have saved more species from the brink than we have lost. And they are fighting to save many more. But, must we as a society always hungry for resources develop in such a destructive direction? Why can’t we change course? Are we basically just money grubbers?