I dipped a bird recently – possibly a lifer. While crossing Gramos Mountain in northern Greece, a Dendrocopos woodpecker flew over the road and landed in a pine tree. First I noticed a red cap – a male, then striped flanks and pale-red undertail, but couldn’t see its wing because some part of the bird remained hidden by a branch at any given time. I had two possibilities, an uncommon Middle Spotted or scarce White-backed Woodpecker – which would have been a lifer for me. It appeared big enough for a White-backed, and yet, I didn’t see it properly!

So, I wrote to my friend Giorgos Spiridakis, a bird guide living by Kerkini Lake, further east, if he could help me with this elusive woodpecker. His answer was something like “we can try, but that is the hardest one to find.” And a week later, in early October I found myself at Kerkini.

Giorgos is driving up the forested Belles Mountain. The autumn has come earlier this year, he says, at this time last year tree crowns were much greener. I am not complaining. I am… mesmerised by the mountain. One Grey-headed Woodpecker flies across the road – a promising start. At first, the road is paved, but as soon as the tarmac ends, the tracks become decorated by hunters in orange vests. It’s the boar hunting season.

The higher we go, by the fields of now coppery-red ferns, the cooler it becomes, with ever stronger winds. We started from the village at, perhaps 50 m a.s.l. and went all the way up to one of the lower ridges at 1600 m a.s.l. The beech forests were dense, landscapes stunning, only that wind… Birds were hiding from it, too, with mostly tits (Coal, Long-tailed and Great), a few thrushes (Mistle, Song and Eurasian Blackbird) and numerous Common Chaffinches showing.

A short stop at the wind swept ridge and a hasty retreat to a lower elevation pine forest. While field guides usually mention that the White-backed Woodpecker requires large tracts of mature deciduous forests with high percentage of dead trees and fallen timber, they fail to say that these peckers are occasionally found in conifers, too, provided there are enough dead trees.

Dirt tracks are in good condition at first. We stop here and there, trying to tell if the double knock comes from a pecker or a tree squeaking in the wind. The second turned out to be true. The soil is disturbed by foraging boars (and there is not a single shot from those hunters).

A ditch in the middle of the tracks, a fallen rock here and there and afterwards the road becomes overgrown with ferns and young pines. Too much is too much, it may be risky to continue and we turn back, down the mountain. The WBW remained elusive like a bear (for me at least – a month ago, Georgos met a mother with two cubs, took a few photos, then dropped down and played dead).

By the cliffs we find several Eurasian Crag-Martins and a consolation species – a family of Golden Eagles in the air! Going even lower, we add a Cirl Bunting and a Syrian Woodpecker.

Enough of the mountains. The next morning is for the Kerkini Lake, one of the youngest national parks of Greece, protected only ten years ago, in 2006 and inhabited by 11 amphibian, 27 reptilian, 44 mammal and 312 bird species. I opt for the bird richest section of the lake, visible from the eastern dyke. 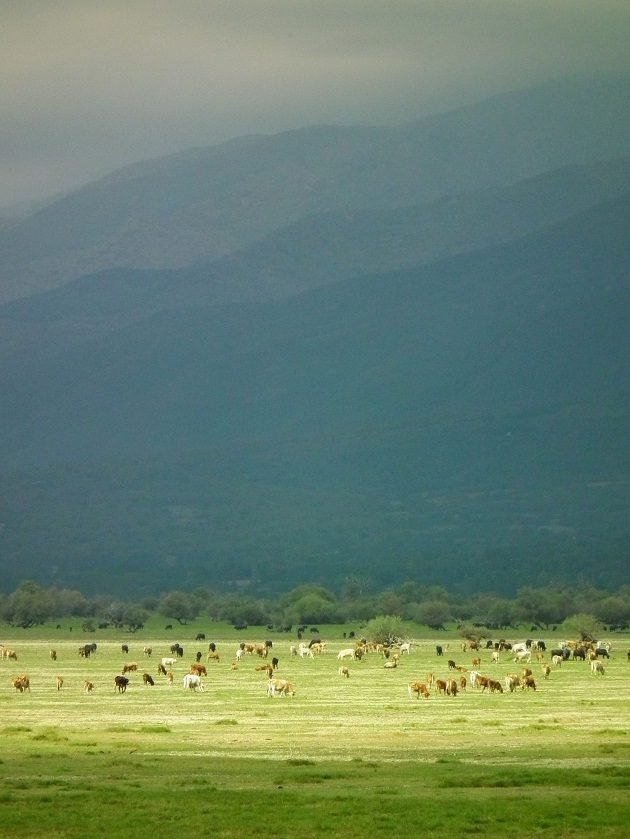 Cows and water buffaloes grazing the dried up lakebed under the imposing shadow of Mt. Belles.

The water is quite shallow and most of the lake is covered by Greater Flamingoes (cover photo), about 1,500 and likely more. Some are far away, some much closer to the shore… feeding in the shallows. I observed them many times, but this is the first time to observe them feeding from such a close range, with those dancing leg moves. Among them are Dalmatian Pelicans, so big and lazy.

A movement in green and yellowish leaves by the side of the road – a Common Chiffchaff, one of those very few European birds that I simply cannot describe. What to say? They have an eyestripe… and? Small and leaf-green. There are three species of which two closely fit that description, and if you do not see them well, the third can be equally confusing! Soon, we are to encounter Willow Warblers, too. And for every bird we have seen, there were at least 3 more that we only heard whistling in the bushes (its Serbian name can be translated as the Whistler).

We are approaching a large mudbar with some more Dalmatian Pelicans… and a flock of geese… dark, round-headed and short-billed, elongated white blaze on their faces – threatened and declining Lesser White-fronted Geese! Should I add, a lifer, too. And not just 22 (that many I dipped on one earlier occasion) but all 95 of them! This species’ population has decreased rapidly owing to levels of hunting on the migration stopover and wintering sites, as well as habitat destruction, mostly as a result of land cultivation.

Large, unicoloured… Lesser Spotted, perhaps? That was my initial ID, it is a Clanga type eagle and the Lesser was the one I commonly find here. I digiscoped one photo that, when enlarged on my computer screen, made me think could it be the Greater Spotted Eagle? After all, it is rather bulky and very dark and not quite Lesser, so I later checked with Giorgos who confirmed my suspicion – the Greater it is, my first in Europe.

The Greater Spotted Eagle is a threatened species. Besides the usual threats such as habitat destruction, disturbance, poaching and electrocution, this species suffers much more from one quite surprising threat – the hybridisation with the closely related Lesser Spotted Eagle. In some European countries mixed pairs can constitute 50% or even more of Greater Spotted pairs. It remains unclear whether this represents a new phenomenon, but the Lesser is far more numerous than Greater in the overlap zone, and the range of LSE appears to be spreading east into the range of GSE.

Further roadside birds include a few lessers – the Lesser Spotted Woodpecker and the Lesser Whitethroat – and quite a few greats – Great White Pelicans next to each other in a pinkish haze in the distance, at least twice as numerous as Dalmatian cousins. One of the last birds on that stretch of shoreline was a young Peregrine, just prior the coffee time.

And birded with Giorgos Spiridakis (@: george-spiridakis@hotmail.com)

« Previous post
Where Are You Birding This Final Weekend of October 2016?
Next post »
Shearwater Success: Seabirds Return to Rat-Free Islands