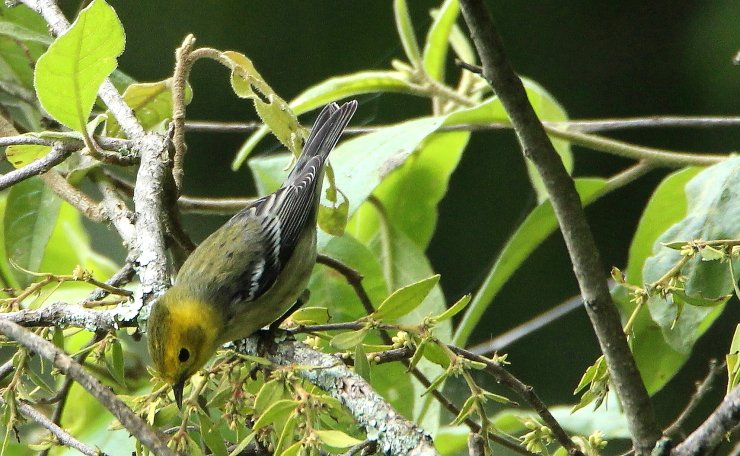 Dear U.S. and Canadian birding friends: I feel your pain. I understand that my gain is your loss.

Although, technically, I mostly felt your pain… for the past four months, while about a dozen beautiful migratory Wood Warblers were nowhere to be found here in central Mexico. What I  feel right now is joy at their return. With a little bit of sorrow for those of you, up there, who will not be seeing them again until next spring.

What my previous experience had not prepared me for, was that this summer I would see many of those species for the first time all at once. On the last day of August, I chose to go to El Temascal, a lovely piece of cloud forest at an altitude of about 7,600 feet (2,300 m). We are in the middle of our monsoon season, and I had to repeatedly find shelter from brief midday showers. It was not easy to get photos, both because the cloud cover was dense, and because I was protecting my camera from water damage. But the Warblers were certainly happy.

My newly arrived Warblers were: Black-and-White, Black-throated Gray, Townsend’s, Hermit, Wilson’s, and Red-faced. Six migratory arrivals, all at once! 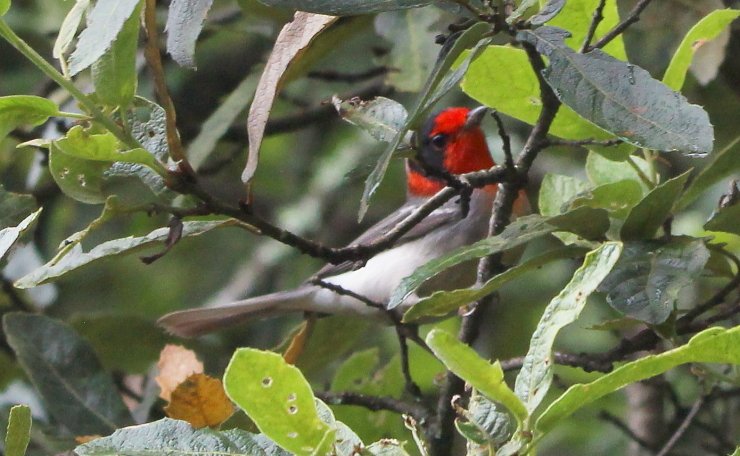 If a day gives me decent photos of only one migratory warbler, let it be a Red-faced Warbler. (Although, truth be told, I’m happy with the Hermit Warbler above, as well.)

Of course, several resident Warblers were also present: Crescent-chested, Grace’s, Golden-browed, and Red Warblers, and our always common Slate-throated Redstart. No matter how wet it may be, how can you complain about a day with a eleven Wood Warblers? 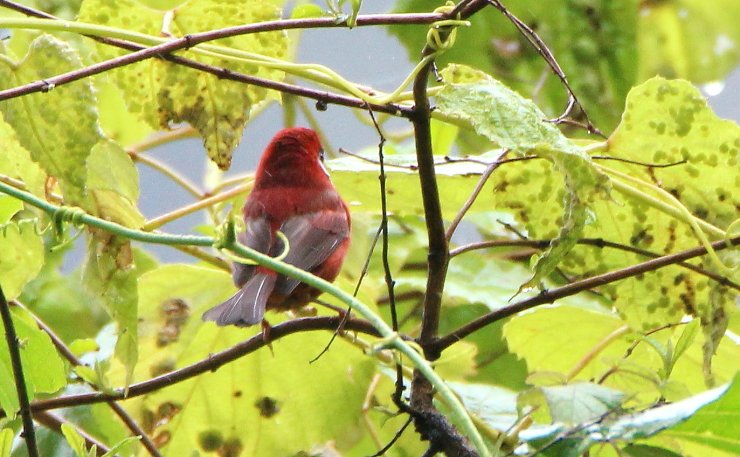 Only the back side of a Red Warbler, but you get the idea. 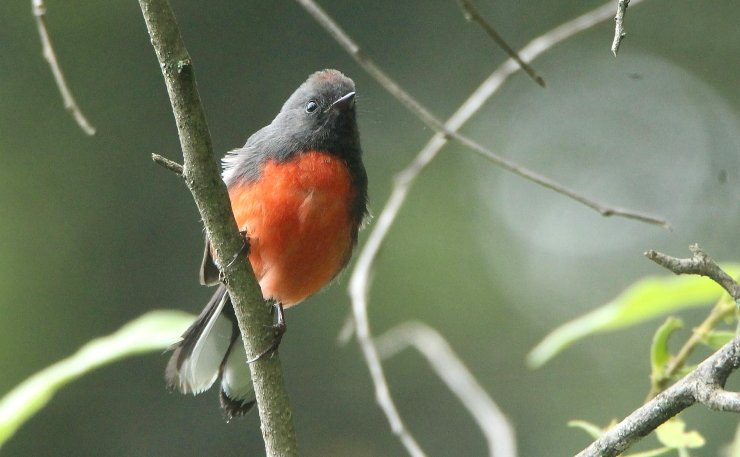 In contrast, this Slate-throated Redstart really knew how to pose.

Of course, even after this successful outing, I can still look forward to seeing a good number of other migratory Warblers. I did not yet see Orange-crowned, Nashville, MacGillivray’s, or Yellow-rumped (Audubon’s) Warblers. El Temascal does not (to the best of my knowledge) host the Ovenbird, Northern Waterthrush, Lucy’s, or Virginia’s Warblers, although I do see these species elsewhere each winter. The elusive Colima Warbler can be found there, but that sighting is always a stroke of extraordinary luck. (The Colima Warbler and Red-faced Warbler are unusual migratory species; both their summer and winter grounds are almost entirely within Mexico.)

Of course, one never limits oneself to a single taxonomic family. While I was delighted to encounter our newest arrivals, my real hope for this trip was that I might once again see two species I had only seen once before, both at El Temascal. And while I am still waiting for my second Ocellated Thrasher sighting, I was delighted to come across the Slaty Vireo, at exactly the same spot where I had seen it sixteen months before! Now I know this skulking bird was not just passing through; to see it a second time, at the same spot, well within the rainy season this time, tells me it probably stays there year-round. The trick is to get it to come out into the open. 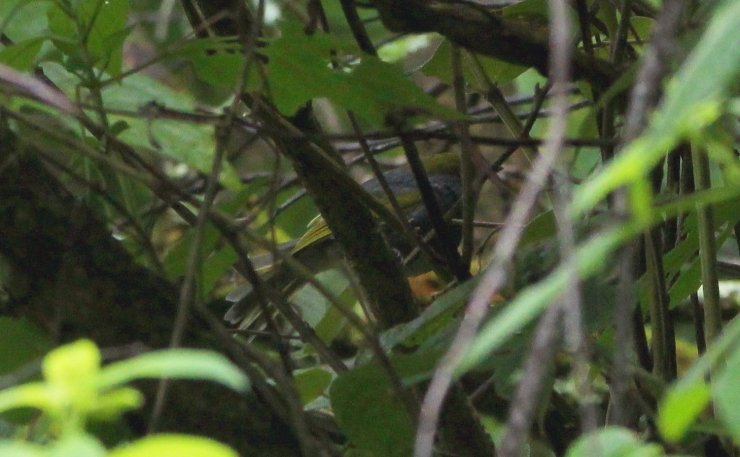 Slaty Vireos are beautiful, trust me, but they really hate open spaces.

This next picture illustrates why I always bird with a camera. The light was so low (it had just rained) that I had no idea what I was seeing when I took this shot. It wasn’t until I did major manipulation of the image at home, that I realized it was a lovely Chestnut-sided Shrike Vireo! 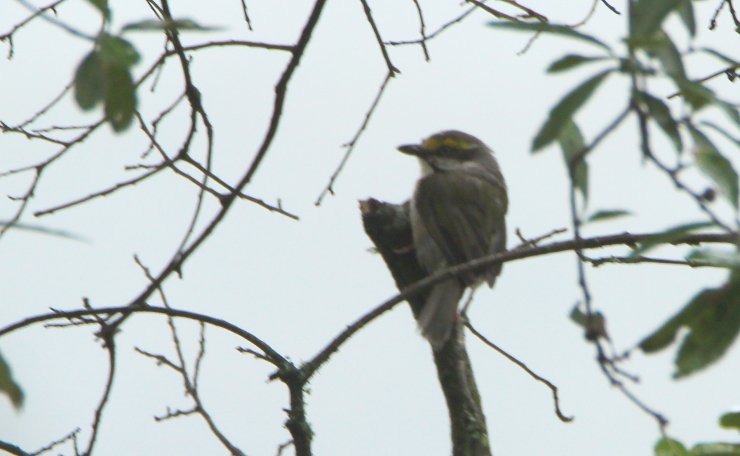 Knowing what grows at El Temascal, I had every intention of eating a few ripe blackberries or wild grapes, if I found them. But I found none. Red-headed Tanagers are usually seen near fruit patches; I suspect this male knew something I didn’t. 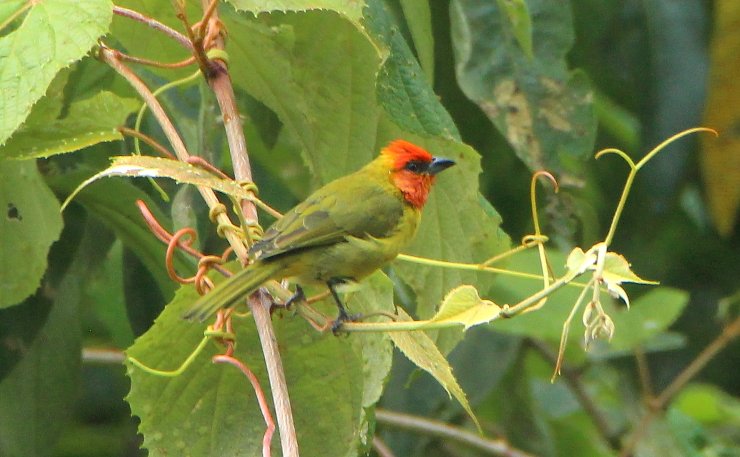 It is unusual, indeed, when the highlight of a day with a Shrike-Vireo and a tropical Tanager turns out to be Wood Warblers! So…

Dear northern birding friends: Don’t worry. I promise to keep an eye on your Wood Warblers until you get them back next spring.

Best Bird of the Weekend (First of September 2013)