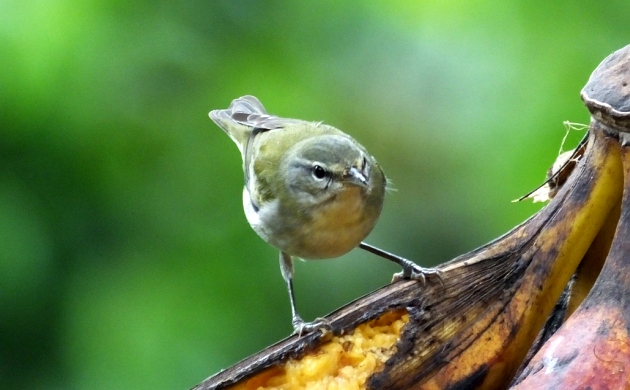 Tennessee Warblers? Costa Rica? Oh yes. If you are headed to Costa Rica for birding from now until March, you will probably see more than a few of these small, plainish, Palearctic Warblerish birdies. They won’t be singing that stacatto May song but you will be hearing them “chip”. Speaking of single noted vocalizations, most of the warbler chips you hear will probably be wintering birds like Tennesee, Yellow, and Chestnut-sided Warblers, especially if you go birding on the Pacific slope. Although the small but mighty Tennessee also occurs on the Caribbean, it’s a lot more common in the drier habitats of the Pacific slope and upper elevations.

Since this little bird spends the summer months in remote, cool boreal habitats that harbor moose, Black Bears, and Canada Jays, one might wonder how Tennessees bide their time in their tropical wintering range. Based on years of personal observations and published studies, I hope to help answer such questions in this post.

In Costa Rica, in general, Tennessee Warblers are one of the more common wintering warblers of the Pacific slope. Go birding in dry forest and any number of edge habitats and Tennessees will make an appearance. Pish and a dozen might flit into view. Scan those little birds and you might find something else, something less common for Costa Rica but most of the time, they will be Tennessees doing their winter range thing.

In Costa Rica, that thing is occuring from the undergrowth on up to the canopy and in brushy habitats too. They can occur in mixed flocks and also occur in coffee farms but mostly ones that have shade trees and most of all, trees with blossoms. Although they hail from places dominated by needle-leafed evergreens, on their wintering grounds, these warblers will choose a flowering tropical tree over a conifer any day of the week. Exotic or not, as long as the tree has flowers, Tennessee Warblers will be there feeding on larvae and taking nectar. Oh yes, when they fly to Costa Rica, Tennessees might act more like sunbirds than other wood-warblers. They love nectar and occasionally visit humingbird feeders too but flowering trees seem to play the biggest role in their winter diet. I bet they also eat some insects attracted to those same flowers but it seems like the nectar is what they are really after.

Fruit feeders also tend to attract a Tennessee or two that have learned to like bananas.

Based on observations of Tenns in Costa Rica feeding on flowering oaks in high elevation forests, they likely also make some local seasonal movements within their wintering range to take advantage of flowering trees. Where and how far they go has yet to be determined. When flowering is affected by climate change, will this also affect Tennesse Warblers? Since they show such apparent dependence on flowering trees, I dare say it could.

Interestingly enough, another boreal wood-warbler species, the Cape May Warbler, also frequents flowering trees. Although this bird is rare in Costa Rica, sightings are almost exclusively at flowering Bottle Brush. I have been checking some Bottle Brush trees near my neighborhood to see if I can locate a Cape May but as of yet, my pishing expeditions have only turned up dozens of Tennessees. That’s alright though because when I imagine where those small birds came from, where they spent the summer and what they accomplished to get here, I look at those little plain birds in a new, impressive light.

Tasmania: Take a look up!