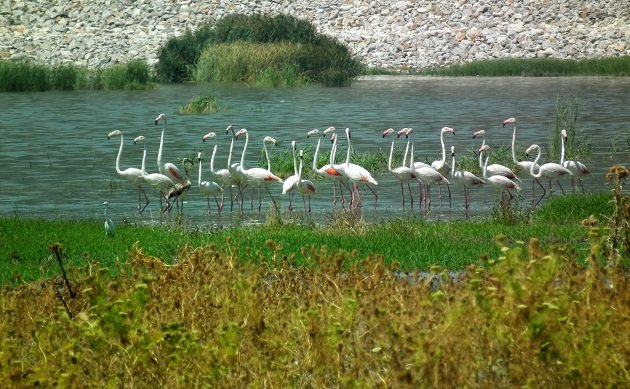 There should be thousands of birds at this time of the year, Dimitris Michalakis from the Karla Lake management authority told me. In early August this year, I saw 77 species here (69 on the lake, plus 8 more in the surrounding areas) but barely more than a thousand individuals.

Located in Thessaly province in central Greece, what is now left of the lake where the god Apollo was married and where the Argonauts built their kingdom is officially called the reservoirs of the former Lake Karla. Have you ever been at a former lake? Now I can say I was. 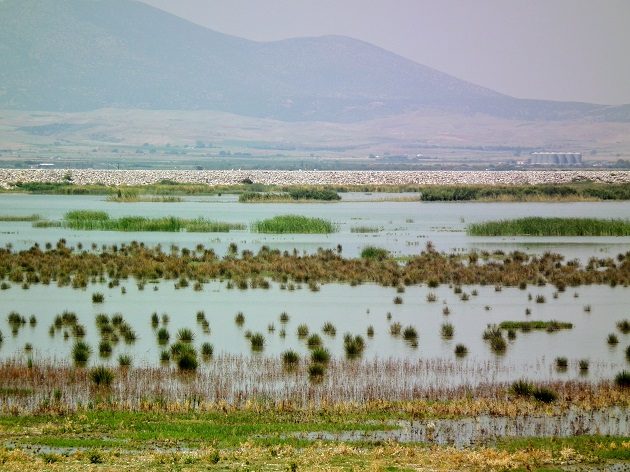 Before it was drained for agriculture in 1962, Lake Karla covered 180 km2 / 70 mi2 – a good portion of the eastern Thessaly Plain and was among the largest wetlands of Europe (visit the Management Body of the lake’s GIS platform). With EU funds, the restoration started in 2009 when embankments were built to create one large and six more small reservoirs.

I find it hard to call it a reservoir, so I will continue to call it a lake. Reaching the northernmost corner of the (largest) lake, I turned west in order to explore it counter-clockwise, so the lake would remain on my driver’s side.

The embankments are high and bare, edged by a canal with a few herons and egrets and surrounded by almost bare soil, baked in this summer’s heat wave (when I was a kid, heat waves used to last for days, up to a week, but this one has lasted almost a month already and is not weakening). I pass the first of several dead cows. This one was already dried up, only skin and bones, but I did not see traces of any scavengers around.

I drove mostly along the dirt track below the embankment, climbing it here and there to scan the lake. In the northern section, the water was deep, interspersed by reed-islets, but the only birds were a few Little Egrets and Black-headed Gulls. 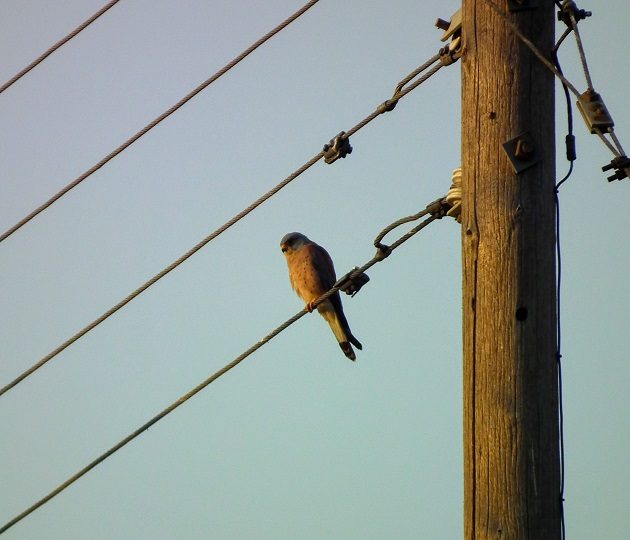 There was a Short-toed Eagle ahead, taking flight to be replaced by another ST Eagle. These two were only the first of several I saw. In a shallow pond, there were three young Common Shelducks. At first I dismissed them for some hybrid geese, until I recognized their JIZZ. In my homeland, some 800 km / 500 mi further north, these ducks are common on migration but very rare in the breeding season and I realized that these are my first young birds – ever. A few Lesser Kestrels by the dyke wall, then a Black-eared Wheatear at some cattle fencing. Common Kestrels could be seen, too, but were outnumbered by their more gregarious threatened cousins.

The commonest shrike of the area is the locally ubiquitous Lesser Grey Shrike, followed by the Woodchat Shrike, while the frequent Red-backed Shrike is lagging behind.

Further along the dyke, a pick-up stopped and a young man in deep angling overall-boots started wading through the lake, flushing the birds! ‘Hey! I am trying to count them all! What do you think you are doing?’ 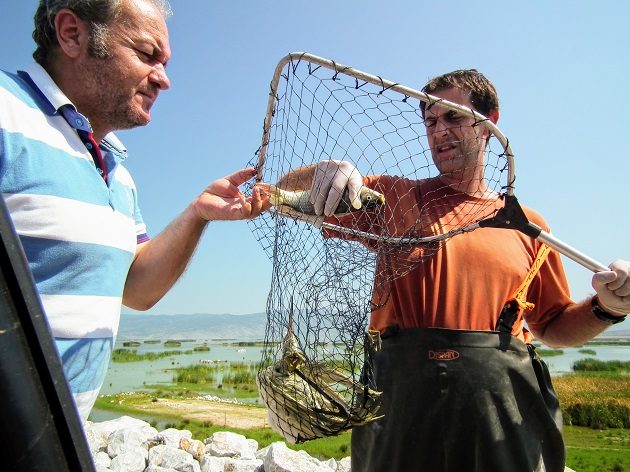 I drove to their car to find Dimitris Michalakis of the Management Body of the Eco-development Area of Karla-Mavrovouni-Kefalovrisi-Velestino, who explained that Yannis was doing that on purpose, to see how quickly they reacted to disturbance, what their condition was and to collect samples of dead or dying birds and fishes. The birds are dying, he told me and continued, we found dead Grey Heron, Little Egret and a threatened Dalmatian Pelican today. This year, we had about 65 dead pelicans.

What is killing them? We hope to find out after post mortem analysis of these samples. Botulism? We do not know, says Dimitris.

Several Stone Curlews flew in front of us, followed by one Long-legged Buzzard. Yannis came back with a dead Little Egret in his net. Hopefully, this bird will tell us its story. 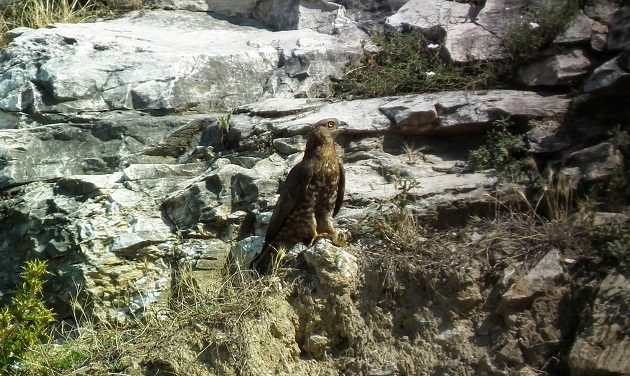 At the SE corner, one Eastern Olivaceous Warbler stopped me, almost calling me to a smaller dirt track under a high embankment resembling a dam wall. There is a canal next to the track and a dry, thorny pasture spreading wide. Lesser Grey and Woodchat Shrikes, Northern and Black-eared Wheatears, more ibises and Stone Curlews, Crested Lark, one young and very cooperative Honey Buzzard, a specialist feeding on larvae out of a nest of wasps a mere dozen metres in front of me, and two large eagles in a thermal… Lesser Spotted Eagles! 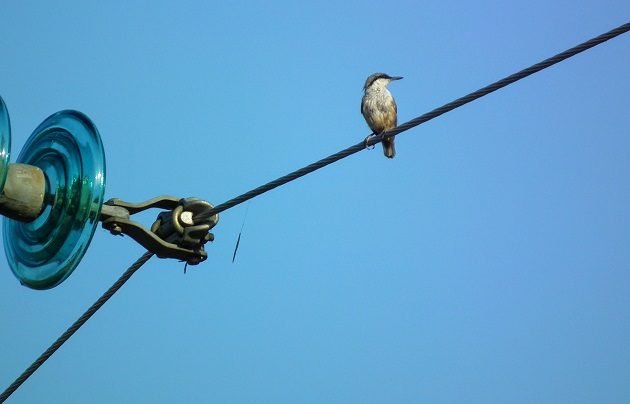 Now the heat was on, my car showing 35oC / 95oF outside and not much less inside. I head north along the eastern shore. Cirl Bunting on a wire, then a very noisy bird… looking for it… on a wire, too, a Western Rock Nuthatch! The other two joined the first one, to chase each other through the rocky maquis.

At the Pirgos Point further north, opposite to an artificial pelican breeding island (with no visible traces of nesting), there were shallows with 22 more spoonbills and 25 more flamingoes, along with two dozen Eurasian Teals and some 30 shorebirds that were flushed by a Marsh Harrier, but I couldn’t observe them in water without disturbing the flamingoes, so they remained unidentified (generally, the most numerous shorebird species on the lake was the Dunlin). 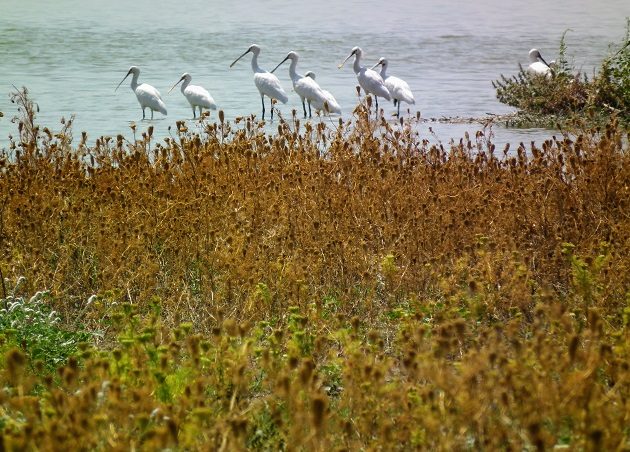 Soon the lake ends. Immediately north of it I found another Short-toed Eagle and a very cooperative close-range Long-legged Buzzard.

Karla Lake is indeed a very recommendable birding area. I also birded the Thessaly Plain north of the main reservoir (quite a few Lesser Kestrels) and the low Mavrovouni mountain east of it (not much, Cirl Buntings were the best birds.)

Yet, what is killing the birds of Lake Karla? At the time of writing, we still do not know. 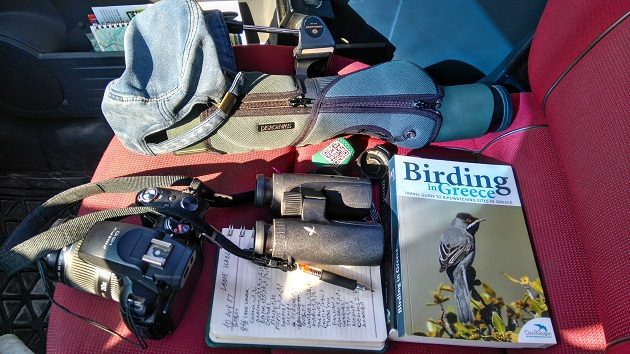 Getting there
The Karla Lake lies 30 km north of the port of Volos, some 10 km east of the main Thessaloniki – Athens highway.

I visited the lake in summer only, so may be a bit biased, but my recommendation is, avoid the embankments: they are too steep, too deep and mostly of no interest to birds (all but the southernmost section of the western dyke which overlooks the southern corner of the lake). The western section turned out to be the least productive, although it may attract diving birds in winter months.

Waterbird-wise, the most productive areas were the southernmost corner, followed by the southern shore and the natural eastern shore by the Pirgos point in the northern section of the eastern embankment. Dry, semi-desert like habitats are to be found in the field below the SE dyke and that section offered some great sights.

Mount Mavrovouni to the east of the lake is at its most productive in spring (migration and breeding), but in August wasn’t worth a visit. Finally, in the eastern Thessaly Plain surrounding the lake some great birds can be found and it is worth devoting some time to those fields, especially near some puddle or a pond.

Where to stay
The Pelion Peninsula (of which I wrote here) south of Volos offers some nice beaches and less crowded villages. 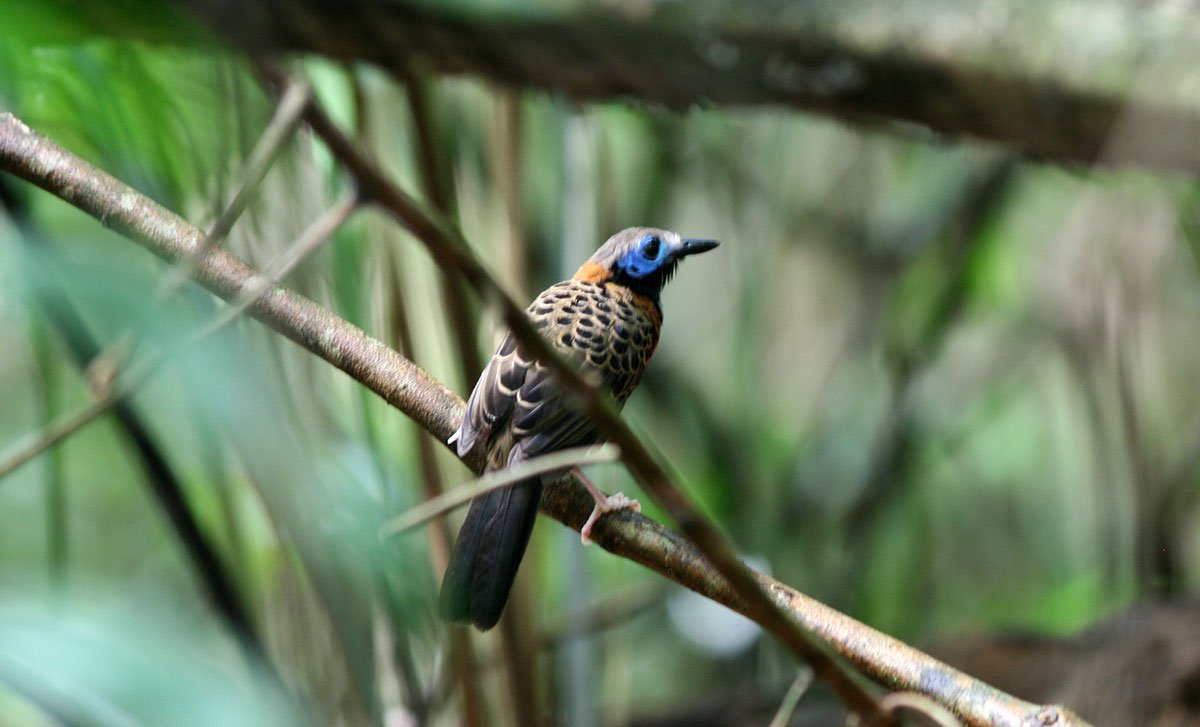 « Previous post
Where Are You Birding This Third Weekend of August 2017?
Next post »
Struggling with the Nighthawks