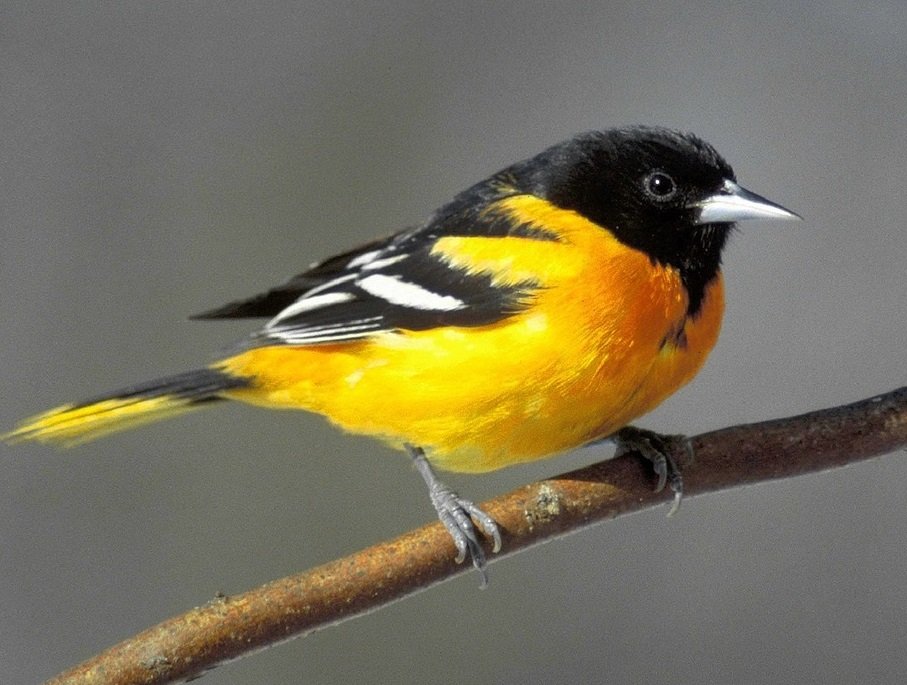 We all know the feeling. We’re birding in the summertime, when a beautiful whistling calls catches our attention. We turn our eyes and binoculars to the canopy, where we peer through the thick, green foliage. Suddenly, we catch a flash of bright orange: a Baltimore Oriole.

Baltimore Orioles spend their winters in Florida, Central, and South America, and migrate north to breed in much of the Eastern United States. It’s true that many know the bird because of Baltimore’s baseball team, but the species’ history with Maryland goes back much further.  In 1882 the legislature passed special provisions to protect the bird, decades before the passage of the Migratory Bird Treaty Act of 1918. In 1947, Maryland made the oriole its state bird.

To hear an Oriole sing
May be a common thing–
Or only a divine.

The famous orange and black colors of the oriole are those of the mature males; females and juveniles are a duller yellow, with white wing bars on their dark gray wings. Male orioles don’t attain their mature colors until their second year.

Baltimore Orioles breed in open woodlands or forest edges, preferring deciduous trees. They feed on nectar, fruit, and insects; like many songbirds, they switch primarily to insects during the spring and summer. They are amusing to watch, as they are described as “acrobatic foragers.”

Their breeding population has been estimated at 12 million birds, 82% of which spend at least part of the year in the United States. However, they have suffered habitat loss not only in the United States, but also in Central and South America. Their populations have been declining, though they were not placed on the 2012 Watch List.