When I picture state birds, I picture the gorgeous Scissor-tailed Flycatcher of Oklahoma, the pristine white feathers of Alaska’s Willow Ptarmigan, or the haunting call of Minnesota’s Common Loon. I don’t picture chickens. And yet, that is the very bird Rhode Islanders chose for their state bird: the Rhode Island Red Hen!

In the 1950’s, there was a special election sponsored by the Rhode Island Federation of Garden Clubs, the Providence Journal Company, and the Audubon Society of Rhode Island. Apparently the hen won, and in 1954 Governor Dennis J. Roberts said: “The Rhode Island red has become a symbol of Rhode Islanders all over the world.” When he signed the bill, the governor was presented with a painting by Arthur O. Schilling, the premier American poultry artist. I didn’t know we had leading poultry artists!

To be sure, it’s a nice chicken. Originating in Rhode Island and Massachusetts, these birds are known to be good choices for people with small flocks. They are described as “hardy,” and “handle marginal diets and poor housing conditions better than other breeds and still continue to produce eggs.” Best of all, they lay between 150 and 200 eggs per year.

While I appreciate the utility of the Rhode Island Red Hen, I think the state’s citizens could have gone in another direction. At the time of the vote, Ospreys and Ruby-throated Hummingbirds were also options, and I firmly believe the latter would have been a great choice.

Though they only weigh .1-.2 ounces, every year these hummingbirds migrate from Central America to the Eastern United States and then back again.  They have a global breeding population of 20 million, and are just gorgeous. Think about it, Rhode Island is tiny, and so is the hummingbird! Perhaps it’s time for Rhode Island to have a second vote? 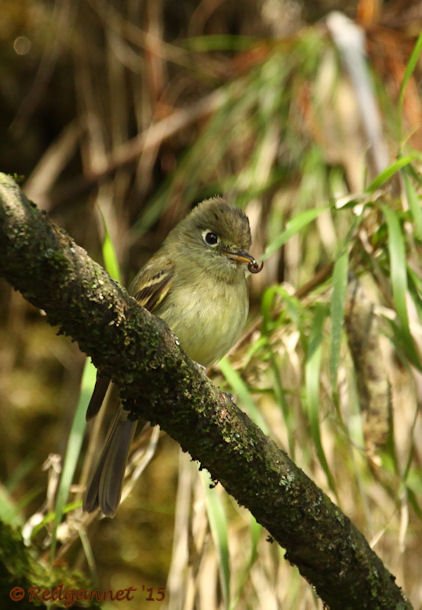 « Previous post
What Is The Sound of One Bird Flapping?
Next post »
Red-shafted Northern Flickers Feeding Nestlings