What’s down in the Arctic.

Baby Bird week couldn’t come at a better time for someone in the High Arctic, suddenly there are birds hatching everywhere. Baby birds here, as everywhere else fall into two broad categories, altricial and precocial. Precocial birds hatch in a relatively developed state. They are covered in down, mobile and able to feed themselves immediately. Altricial nestlings, not so much. They are born nearly naked, with the odd tuft of down, blind, and helpless. They are fed by one or both parents, even after they’ve fledged and left the nest. They are two strikingly different strategies, both of which seem to working well this spring, as everywhere one turns there is new life on the Tundra.

Let’s start with the altricial birds, shall we?  Horned Larks breed widely over North America, including up here in the High Arctic.  Here are five in a nest, close to fledging. And here is another, already fledged.  Horned Lark fledglings seem impossibly big to me, like they are larger than the adults (which of course they are not). A surprise bird for me, given I was looking for baby Baird’s Sandpipers there.

Snow Buntings are one of our most abundant passerines. Here is a female making one of her frequent trips to feed her helpless young. An unusual nest, they are normally located under rocks on the ground.

And these are the objects of her attention.  Coming soon to a snowy field near you. Snow Bunting chicks in their nest.

And one last photo of the altricial baby birds.  This photo is actually from last year, mostly because I’ve not taken the time to discover Lapland Longspur nests this season.  The babies should soon be fledging as they grow quickly. This Lapland Longspur nest was well hidden deep in the tundra.

And now onto some precocial birds. Which most people believe up the cute factor, due to their ready made downy puffball appearance.  For many North American bird enthusiasts, Common Ringed Plover‘s are a bird they rarely, if ever, get to see. Here they are a common breeding bird, one of our two species that migrate from here to Europe and then south. At the same time (and sometime the same location) we have Semipalmated Plovers breeding, which makes identification a challenge. Why does this Common Ringed Plover have eight legs? A short time after hatching, these chicks are up and mobile and very fast. I had hoped to have some Semipalmated Plover chick photos for comparison but as of last night they seem to be still at the egg stage. So you’ll just have to make do with these… See, little balls of puffy down. With some serious legs.

By far, our most common shorebird is the Baird’s Sandpiper.  They are everywhere right now, as the families make their way from uplands down to the water’s edge. These ones had a head start, nesting right near the shore. They are a lot more cryptic when laying still on the tundra. But in the right light, they glow!

This is a photo from last year, as neither the Pacific nor the Red-throated Loons‘ eggs have hatched yet, it’ll be about 2 more weeks.  But I couldn’t resist as I’m just proud of the series of photos this one came from. Pacific Loon chick with its parents.

And finally… hey wait a minute those aren’t baby birds in that nest. What the heck are these Collared Lemming babies doing in this post? A nest full of the next generation that will help you see the next irruption of Snowy Owl. 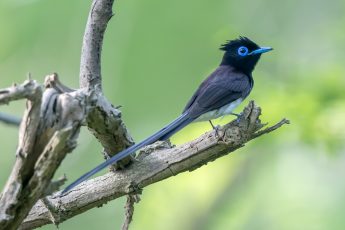