What’s Up with the ABA?  Part III (Finances)

I have recently written about the American Birding Association, as it is currently searching for a new president. As indicated in a prior post, the ABA is in debt and has routinely run annual operating deficits. Since that post, the ABA has updated the financial disclosures page on its website, so there is new information.

Additionally, I was curious how the ABA arrived at its precarious financial position, so I did some historical research and decided to share the results.

Although it surely obscures some nuances, I have focused on three key figures:  (1) total revenues, (2) total costs, and (3) net assets. The charts below are based on the IRS Form 990 filed annually by all nonprofits, including the ABA. (All of the data depicted in the charts is at the end of this post.) These forms are filed publicly and are on the ABA website and on various other sites, such as ProPublica.

The high-level summary is that the ABA has experienced significant long-term revenue declines. As revenues declined, expenses did not decline as quickly, resulting in operating losses and the deterioration of what had been a fairly healthy balance sheet. The end result is an organization in debt and with substantially less revenue than it had in the 2000s.

The details are below. 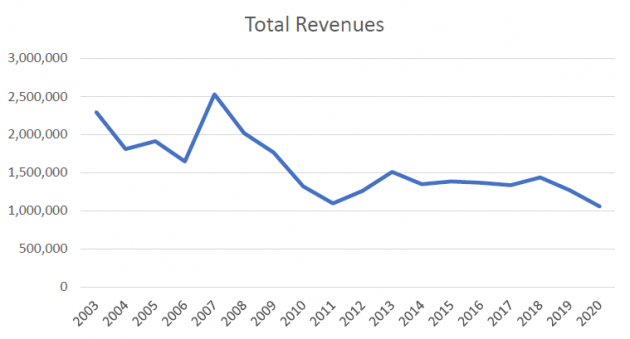 Expenses have declined as well, though not as quickly as revenues. In particular, it appears that expenses were increased in response to what turned out to be a one-year revenue spike in 2007. One cause of the post-2007 revenue decline may have been the Great Recession. 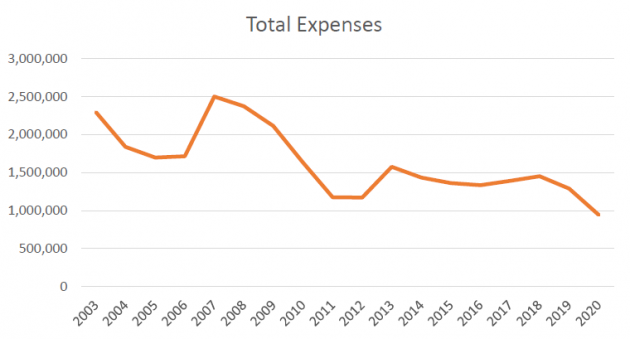 The revenue-expenses divergence resulted in several years of negative net income, from 2008 to 2010. 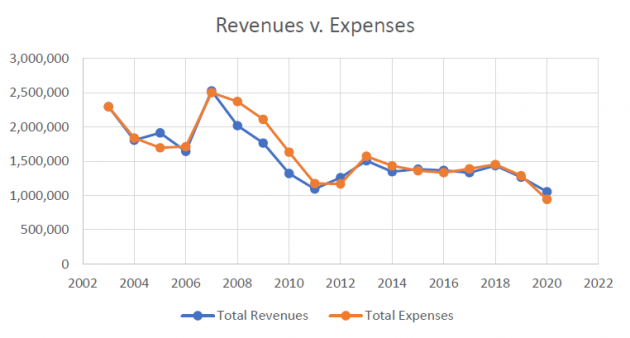 The impact was a significant decline in the financial health of the ABA. From 2005-2007, the ABA had a relatively healthy balance sheet, with net assets of approximately $1.0M. However, by 2010, the accumulated operating losses had resulted in a deficit in net assets (about -$75,000). 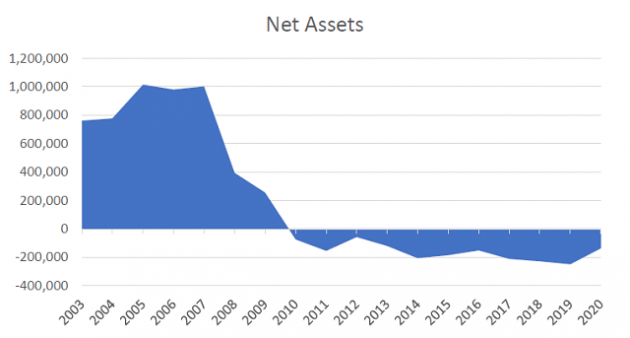 The financial statement from 2010 (the first one available on the website) noted the deficiency in net assets and stated that the ABA had a plan to reduce the deficiency. The plan was to:  (1) monitor the budget; (2) reduce expenses; and (3) increase membership numbers and membership revenues. (It seems to me that the ABA should already have been doing these things as a matter of course.)

The 2011, 2012, and 2013 Financial Statements continued to note the increasing deficiencies and continued to state that the ABA had essentially the same plan of action as listed in the 2010 statement.

In 2014, the accountants seem to have first raised the issue of “substantial doubt” about the ABA’s ability “to continue as a going concern.”

The statement stated that the ABA had essentially the same plan to reduce the deficiency, and that plan has been repeated essentially verbatim every year since. As the numbers indicate, the plan has not worked, as the ABA’s financial condition has worsened.

The net assets deficiency indicates that the ABA has little financial flexibility, as it has no reserves on which it can draw. Indeed, in 2019, the ABA took a $30,000 loan from an interested party to meet its cash flow needs. That loan appears to have required approval of the Board of Directors. (By 2020, the loan had apparently been paid.)

The COVID-19 pandemic in 2020 appears to have resulted in a substantial decline in expenses, and a much smaller decline in revenues. As a result, there was an operating surplus in 2020 and a substantial reduction in the net assets deficiency (from -$249,000 in 2019 to -$137,000 in 2020). Thus, whatever its other impacts, COVID-19 appears to have had a positive impact on the ABA’s balance sheet.

That said, the ABA remains in financial peril. The 2020 financial statement repeats the language regarding “substantial doubt” as to the ABA’s ability “to continue as a going concern.”

The 2020 financial statement stated there was a new aspect to the plan to address the deficiency in net assets: “Developing a strategic plan to help the Association focus on building sustainable programs for the future.” This is a welcome development, and one hopes that membership will be consulted during development of that strategic plan and that the result will be shared with membership.

As indicated above, I am not an accountant, so if there are mistakes, please let me know in the comments and I will fix any errors.

The charts are based on the figures below, which were drawn directly from the ABA’s Form 990s. 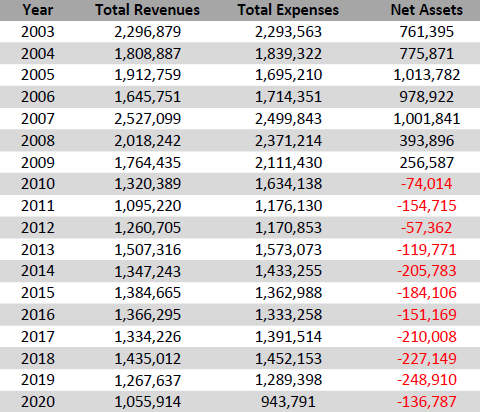