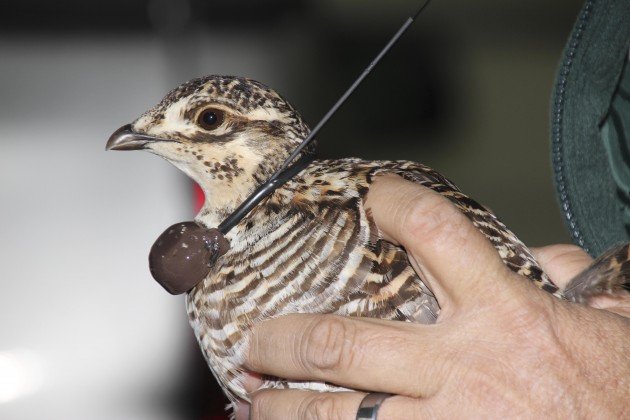 Not quite as fancy as the satellite tracker that Bird No. 112 got, this radio transmitter nevertheless tells scientists at the Missouri Department of Conservation where this Greater Prairie Chicken is.

That’s what scientists would like to know. (And actually, this particular Greater Prairie Chicken crossed two states.) After being nabbed in Nebraska and outfitted with a GPS collar in April of this year, Bird No. 112 was released in Iowa and has since traveled a circuitous route of more than 1,100 miles across two states.

Researchers don’t know if this type of journey is the exception or the rule for Greater Prairie Chickens. But they’re hoping that following the birds’ whereabouts will help reveal more about their preferred habitat. That could, in turn bolster efforts to boost population numbers in places like Missouri, where Greater Prairie Chickens barely register in the triple digits. This map shows Bird No. 112’s meanderings across Iowa and Missouri. According to the Missouri Department of Conservation, “The upper green dot is a lek at the Kellerton Wildlife Management Area in Iowa where Bird No. 112 was first released. The lowest green dot is Dunn Ranch in Harrison County, Missouri, where prairie chickens were also released and are being tracked. The darker the square, the more recent the bird’s position. The longest single movement was about 24 miles on April 25 from Grundy County to Mercer County, Missouri.” (Image credit goes to Jennifer Vogel from Iowa State University.)

Where is Bird No. 112 these days? She seems to have got right back to where she started from. But perhaps she still hasn’t found what she’s looking for? Just call her the wanderer? She’s as free as a bird now? (I could do this all night, folks.)
Conservation Greater Prairie Chicken
Share:

Fallout on Your Front Lawn