This is a big year for winter finches! Already John of A DC Birding Blog has summarized Ron Pittaway’s Winter Finch Forecast for 2007-2008 and Nicholas of Biological Ramblings has posted on the Invasion of Winter Finches, to say nothing of the Backyard Finches Drew of The Nemesis Bird has spotted or the irruptive Common Redpolls, Pine Grosbeaks and Evening Grosbeaks of which Lillian of the Stokes Birding Blog has marvelous pictures. And while I already have seen several species of winter finches this year during my Adirondack adventures a few have escaped my eyes up until recently.

So early on Veteran’s Day I headed out to the hill towns and forests of western Albany County to meet up with my friend Tom, who lives out there, and track down some of the Pine Grosbeaks and Common Redpolls he had been spotting over the previous couple of days. En route, in the faint pre-dawn light, with a state trooper behind me, a Great Horned Owl swooped over my car, causing me to swerve erratically while I made sure of the identification. Somehow, I didn’t get pulled over and ticketed.

When I pulled up at Tom’s house he was already in his driveway, looking intently at some small birds in a birch tree near his feeders. They looked like goldfinches to me and when I asked him why he was looking at them so intently he let me know that he had just heard a Common Redpoll. We quickly found a couple of the pretty, rosy finches and watched them feed on his thistle seeds. They were the first redpolls of the year at his feeders and New York State year bird number 293 for me. Talk about perfect timing!

I quickly called Will of The Nightjar, who with his wife, Danika, and his daughter, Lillian, were also planning on searching the wilds of Partridge Run State Wild Management Area for winter finches, and let him know to stop at Tom’s and look at the feeders. Danika actually got recognizable pictures of the redpolls so I recommend checking out Will’s post about the day.

We left Tom’s house in Tom’s truck, the better to navigate the sometimes treacherous roads in the area, and started looking for finches. Our first stop netted us a total of five flyover finches that stayed silent and were too high for identification. We were pretty sure they were Pine Grosbeaks but neither of us felt confident making the call. Tom pointed out the bumper wild grape crop that we hope means that the finches will stick around for awhile, and also mentioned that the birch trees have lots of seeds and that several stands of spruce still have lots of cones left from last year’s bumper crop. Despite the abundance of finch food we found finding finches frustratingly difficult. Our next stop was a success in a way though, as my second Great Horned Owl of the day swooped low over the truck after we had gotten out of it! We watched it perch briefly in a spruce before flying back across the road. Two Great Horned Owl flyovers in about two hours’ time!

The rest of the morning was filled with driving back roads and walking down trails, putting our bins up at every hint of movement. We spotted Common Ravens, White and Red-breasted Nuthatches, Black-capped Chickadees, Golden-crowned Kinglets, and a host of other common birds. At a stop along the car-breaking Beaver Road Tom heard the yellowlegs-like, three-note call of a Pine Grosbeak from some berry bushes that were loaded with American Robins. When the robins flushed, we both heard the call again and spotted one bird in the flying-away flock with the undulating flight of the Pine Grosbeak. Not the look I wanted but combined with the call it was enough to check it off the list.

Later we found ourselves staring at a flock of Evening Grosbeaks high in some distant spruces, chased there by a couple of Sharp-shinned Hawks that were using a bird feeder as their private hunting grounds. Mixed in with the Evening Grosbeaks was at least one female Pine Grosbeak (probably two but I couldn’t get the scope on the second). Finally a somewhat decent look at the bird that I could now check off with confidence!

Still later we came across a second flock of Evening Grosbeaks that let me take some extremely lousy pictures. And, just to brag a little bit without going into detail, we also spotted two Northern Shrikes, a total of five species of woodpecker, five species of waterfowl, and had a Barred Owl fly over Tom’s truck in a spruce forest. Not a bad day’s birding! And it left me with only six birds to go in the state to reach 300 for the year! 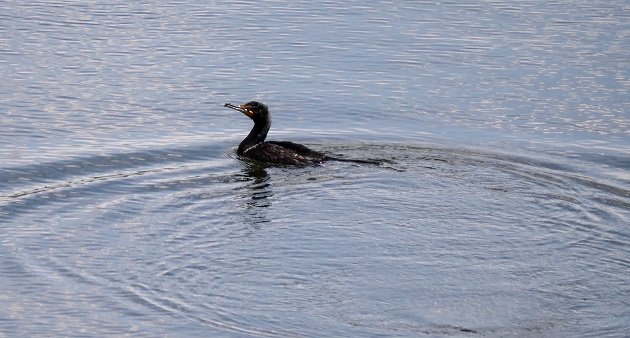