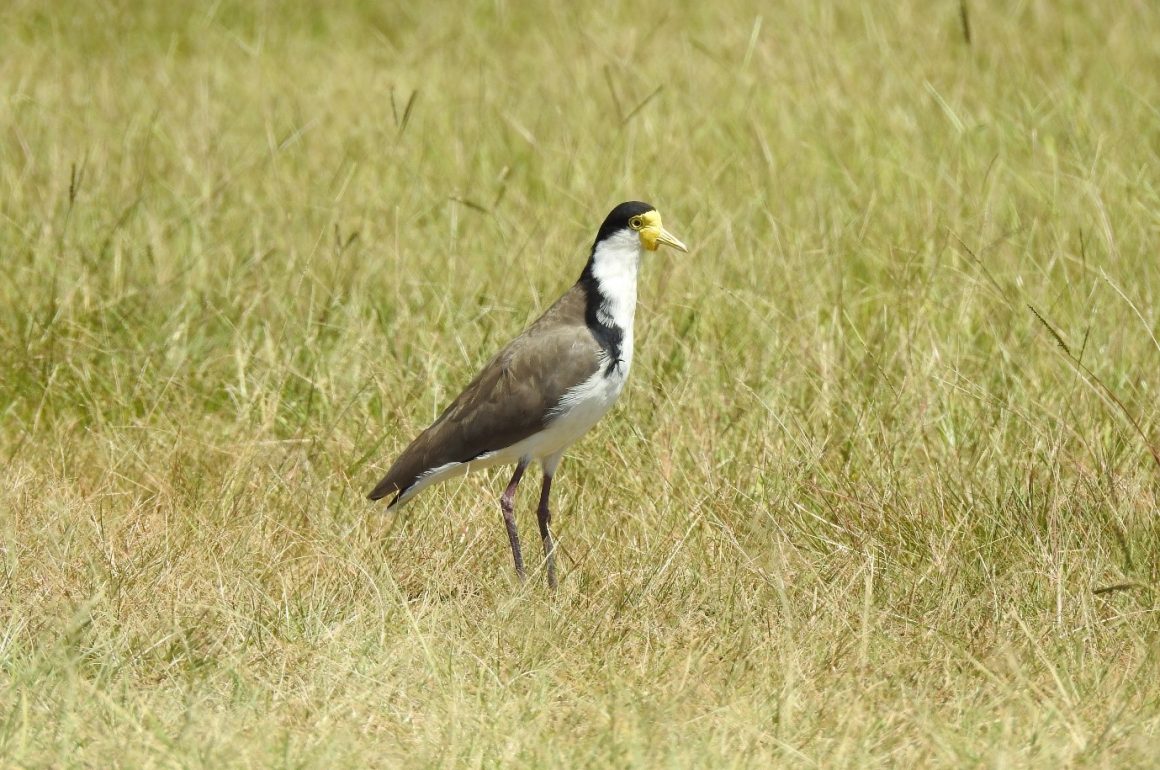 Ken Cross lives with his wife Megan and their three children on the hinterland of the Sunshine Coast on Australia’s east coast. Currently he is the convenor for Birdlife Australia in his local area and, as that suggests, he loves sharing his passion for birds and all wildlife through outings and bird walks. Currently Ken continues to dream of overseas birding tours but will settle for ones down under. This is Ken’s first contribution to 10,000 Birds.

The alternate title of this post was Using Social Media to share the love of birds and birding, for what will likely be obvious reasons. I love birding and I also like spreading the good word of bird watching and like an annoying Christian zealot I try to grow my local flock to see and enjoy and identify the local flocks of our birds. One of the ways that I have encouraged new bird watchers is to use Social Media.

Facebook was chosen to establish an online local community of birders which had the capacity to grow. Now this is not the first time Facebook has or is being used to showcase beautiful pictures of birds, to allow conversations between birders and to highlight the location of uncommon or rare bird species.  I wanted my page to do those things of course but I also wanted it to be a little different.

I decided to highlight two key ‘components’ of birding.

First the listing part. My Facebook page, imaginatively titled, ‘Birds and Birding Sunshine Coast 2021’ challenges all participants to a Big Year challenge; to see how many different species that can be collected via photographic image within the greater Sunshine Coast area, aka the Zone of Happiness.

I live within this Zone of Happiness. Everyone else, aka non birders, know it by another name – The Sunshine Coast. The Sunshine Coast as an area between the coastal towns of Caloundra in the south extending north to the trendy surfing Mecca of Noosa and extending to the Blackall and Conondale Ranges to the west. Zone of Happiness Birders see it as a slightly more generously proportioned area extending north to the southern tip of Fraser Island – the largest sand island in the world – and then south to the southern tip of Bribie Island. The Zone extends westward, bordered by major roads, to allow a huge and diverse area for birding. 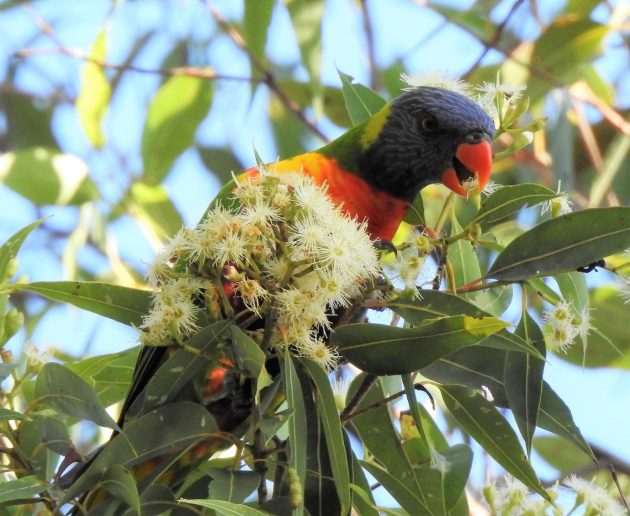 The zone’s large size was declared to allow for more people to easily participate in addition to ensuring there was a large variety of habitats within the zone which of course created ample opportunities to record more bird species.

Obviously the winner for each year has taken pictures of the greatest variety of bird species within the zone in the calendar year. For this skill and effort they win nothing, save respect and perhaps jealousy from their peers. Actually they do get a very poorly produced certificate published online that no doubt the winner prints and places proudly in a public place of prominence. 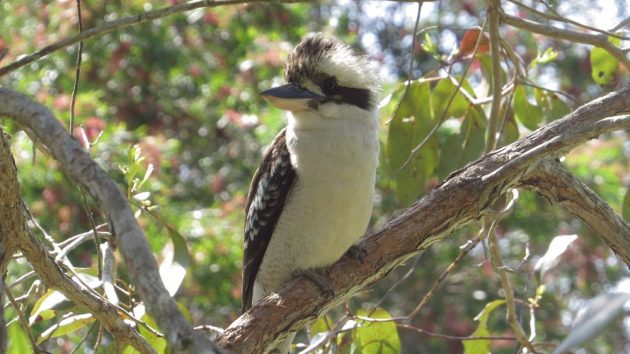 Laughing Kookaburra – the largest kingfisher species in the world and a common woodland and suburban species. [Ken Cross]

In 2020 with Covid 19 shutting down international birding, some of the local legends concentrated on their local lists more exclusively; some of the birders birding, more or less, full time. Greg Roberts, the favourite and eventual easy winner recorded some 312 species with photos that allowed identification of the bird.  The contributing or playing birders together produced photographic records for some 326 species [compared with 315 in 2019 and 318 in 2018]. Over fifteen birders created Photographic Year lists of over 200 species within the Zone in 2020.

So here in this zone in 2021, several hundred birders have a year-long competition of birding, up from 50 or so in our first year; the page encouraging a local big year every year with the birders being clickers rather than tickers. 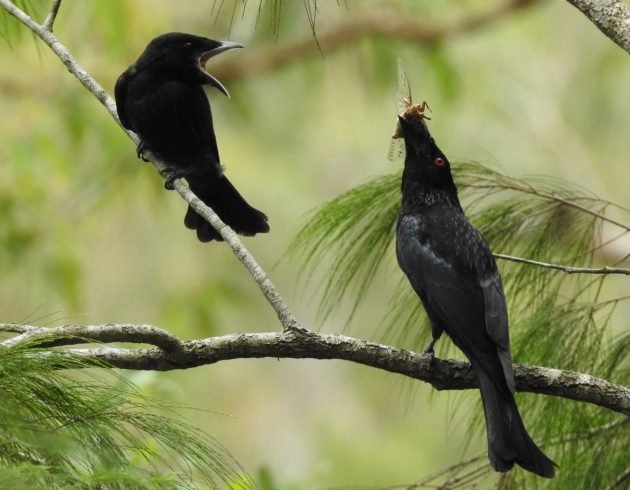 Spangled Drongo – a common and conspicuous member of a family that has many species in Asia. [Ken Cross]

I think it would be a limited site though, if it only encouraged the best of local birders; which a big year has a habit of doing. I wanted my site to ‘work’ for beginners as well so I added a small but important detail. 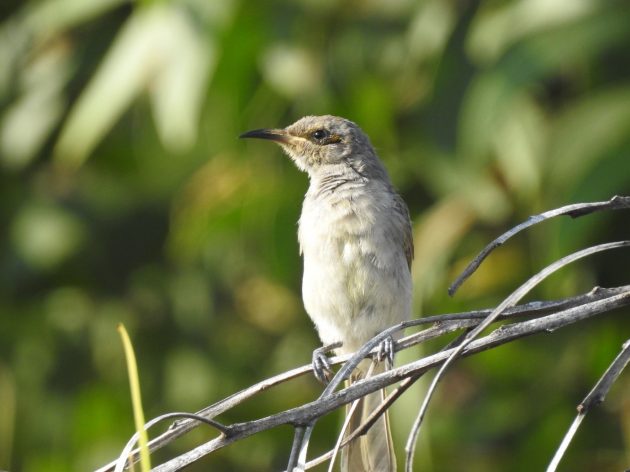 Brown Honeyeater – the most photographed Honeyeater in the Zone of Happiness. [Ken Cross]

The second part of my page’s experience was for members, preferably the beginners were to identify the birds posted. Each photographer would post their first bird of the year with the caption – #1 – Charlie Moreland Campground [that is, the location where the image was taken] and the date. It would be then the job of someone to identify the species. Many birds are of course easy to identify however some of the more difficult species deserve and need a little debate around their identity and identification features are highlighted during these conversations. Beginners learn identification skills and knowledge when visiting the page rather than just meekly accepting the photographer’s identification as in other sites. Secondly they learn where to see these species.

When one looks at this site on a smart phone all one sees is the picture plus a numbered label plus the location so they may learn too through the repetition of the identification process. When they click on the image they will then see the bird named – hopefully correctly! 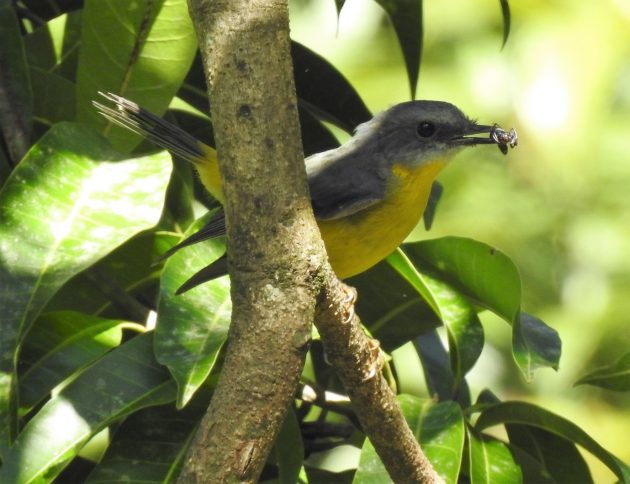 The big year idea also works for less experienced birders for, like golfers, they can compete with themselves. Each year they have an opportunity to best their score from the year or years before. With the accumulated shared knowledge of identification features plus site information this becomes do-able. 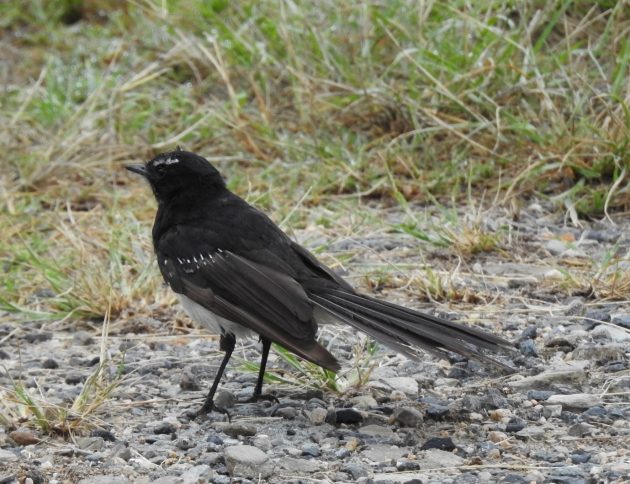 Willie Wagtail – actually a fantail not a wagtail  however there is no chance of a name change! [Ken Cross]

I have been impressed with how many birders from around south east Queensland have embraced my Facebook concept. Currently I have expanded the number of pages that I administer to include the following; Birds and Birding SE Queensland 2021 with some 300 members after starting on the 31 December, 2020. I also have Facebook pages that offer sites for Australian states run on near identical lines, specifically New South Wales, Victoria, Tasmania and South Australia. There has also been a site set up centred on the New England area of New South Wales, run by a local there, following my method.

Please visit one of the pages linked above, read the pinned notice, the rules and expectations and consider if a similar idea could work in your local area. For me it has been very satisfying seeing new birders emerge and to flourish within a year or two; their long lists and the quality of their photography becoming outstanding.

One final point I would care to make is around the idea of photography. I am a birder first and a photographer second. The careful identification of species and their conservation and welfare are my chief concerns. I more ‘carry a camera’ than tag myself a photographer and so through my sites I emphasise the notion of ‘Quantity rather than Quality’ in terms of image. As long as the species is identifiable by the image then the image is deemed ‘good’.

Accompanying this article are photographs of the most common species recorded in our area. Despite being common they are pretty special birds so I hope you enjoy them. 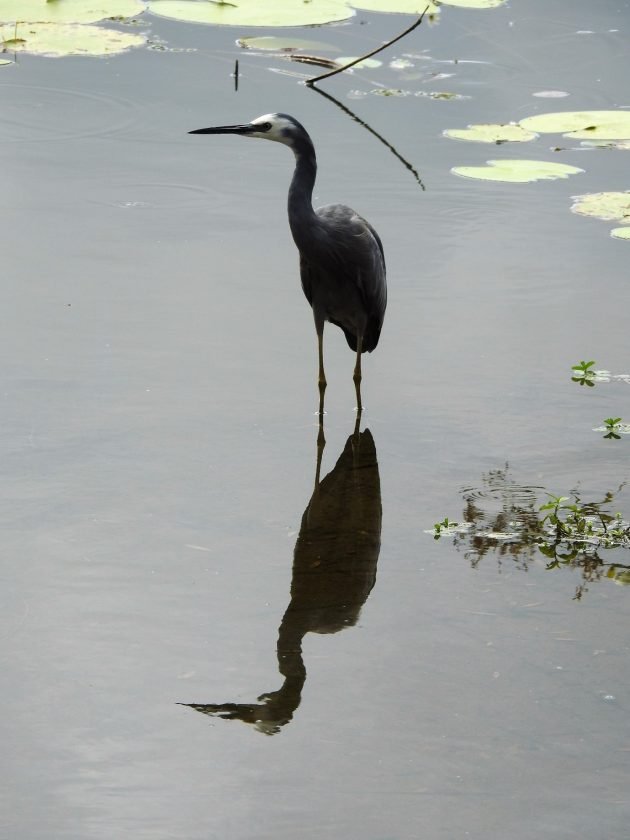 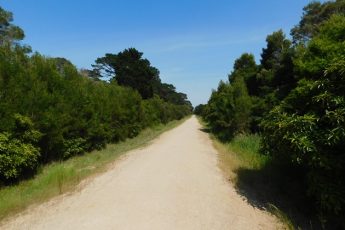 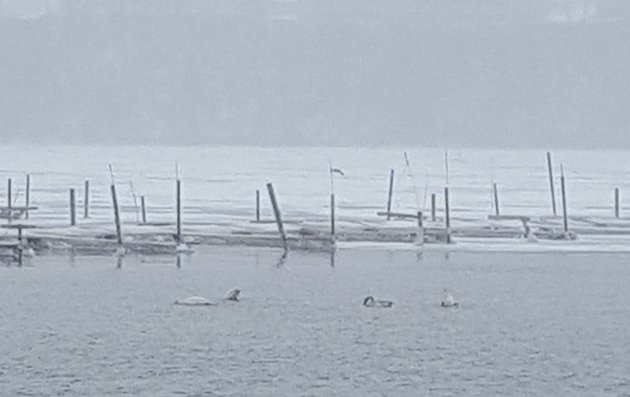 Best Bird of the Weekend (Third of January 2019)