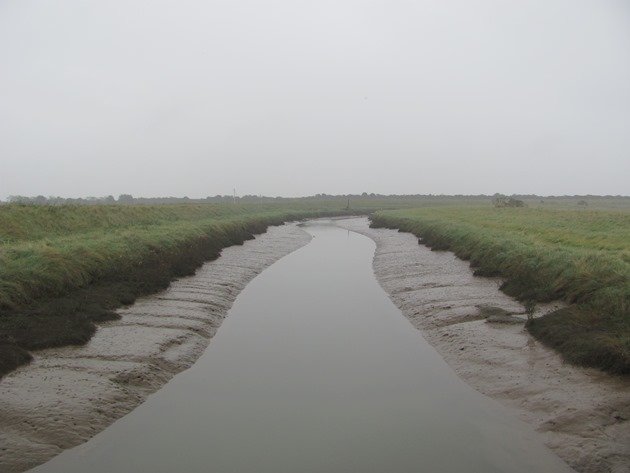 On our recent visit to the UK we did a lot of walking and birding and Mum is very familiar with many of the good walks that can be done not too far from home offering a variety of environments. During October the weather can be variable and on the morning of the 9th October the weather did not look great, but we decided to head for Saltfleetby to walk in the Saltfleetby-Theddlethorpe Dunes National Nature Reserve. The area offers tidal sand and mudflats and of course plenty of bushes for birds to hide in when the weather turns bad! You can adjust the length of your walk around the weather if need be and we were prepared for most types of weather! 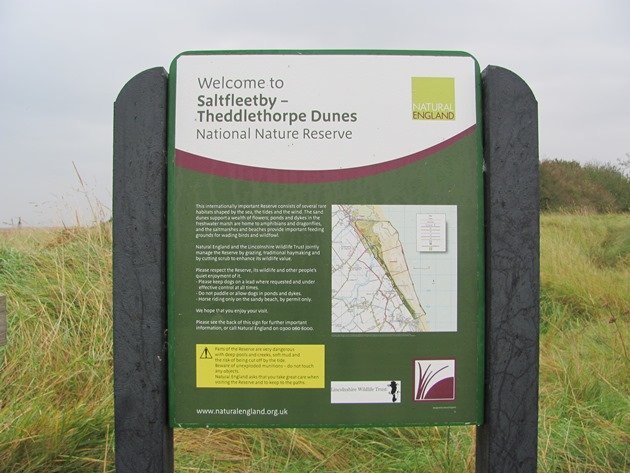 Just before we headed off Grant checked online to see if there was anything special around the area that we should keep an eye out for. He noted that a Long-billed Dowitcher had been seen in the area and was presumed to be the same individual that had been reported by Spurn Bird Observatory in September. It mentioned “Paradise Pond” as a location and Mum knew of a pond there from previous visits, but was not aware of the name of it. Once we arrived at Saltfleetby the weather was not great and it didn’t seem to know if it wanted to be rain or heavy fog and we set off towards the coast. We had soon observed Common Starlings, European Robins and House Sparrows. A birder was at the pond Mum knew of and asked if we knew if it was “Paradise Pond” and we confirmed we had no idea! He had travelled across the country in search of the Long-billed Dowitcher and had not found it. The pond did offer at least five Common Snipe, Mute Swans, Mallard and Eurasian Teal. The tide was high as we crossed the channel and there was no mud exposed at all and we headed out towards the coast on the grassy path. The bushes along the edge of the track were good for European Goldfinches and Common Blackbirds and soon we could see the saltmarsh was good habitat for Little Egrets. We counted no less than twenty five individuals in a small area and the old pillboxes from the Second World War offered a good vantage point to scan across the flat land ahead. Of course there was added danger due to the fact that there may be old munitions present! We kept to the path! 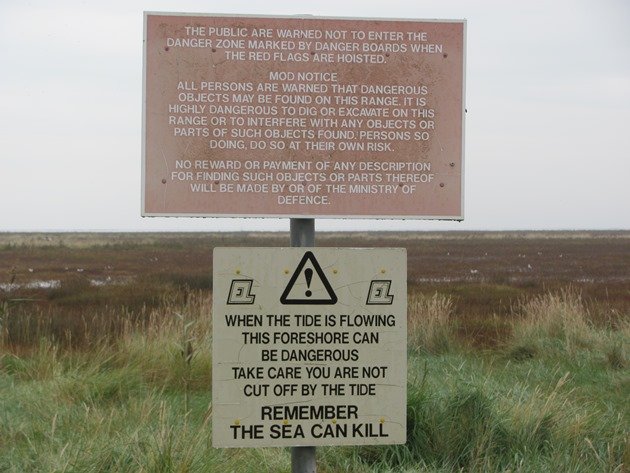 Warnings-note all of the Little Egret behind the sign! 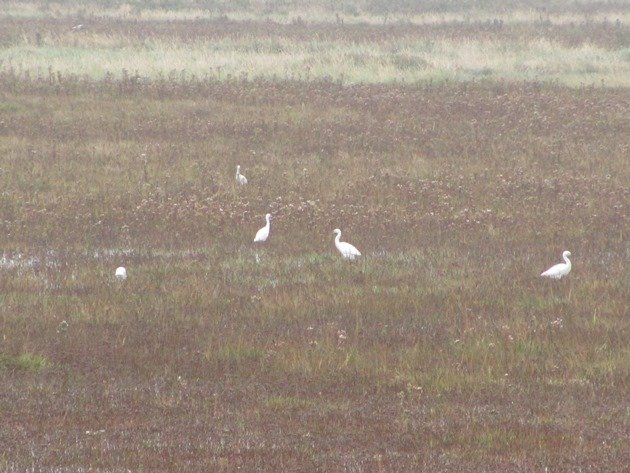 It wasn’t long and we had added European Stonechats, Eurasian Blue Tits, Great Tits, Eurasian Wren, Great Cormorant, Common Pheasant, Eurasian Magpie, Marsh Harrier, Common Chaffinch and Goldcrest to our list and we were soon out on the beach. The tide was already racing out and the weather was not improving and we started to head back towards the car along the loop track where we observed our first Mistle Thrush for 2017. It was not wet enough to justify complete waterproof clothing, but it was very poor visibility. We had a surprise when a weasel crossed the track in front of us and then turned around and came back to look at us and then continued on its way. Apparently that is what weasels do! We stopped once again at the channel and the rain had just started to catch up with us, but there on the mud was the Long-billed Dowitcher feeding away! It really wasn’t the ideal time to be photographing a Long-billed Dowitcher, but it is better to have a photo of something in the rain rather than nothing-right?! You can see the channel in the header photo and believe it or not, but the Long-billed Dowitcher is feeding on the left hand side! 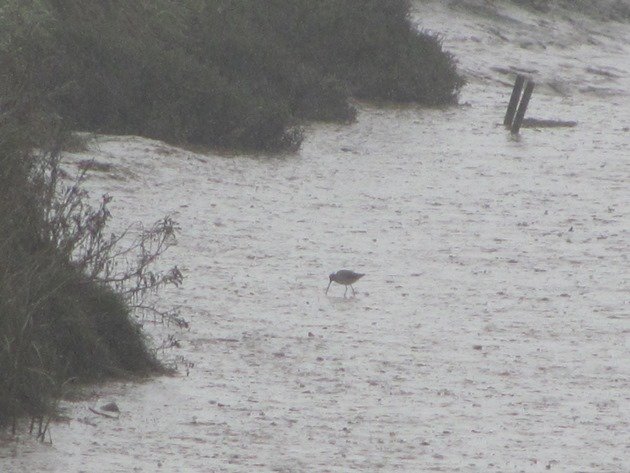 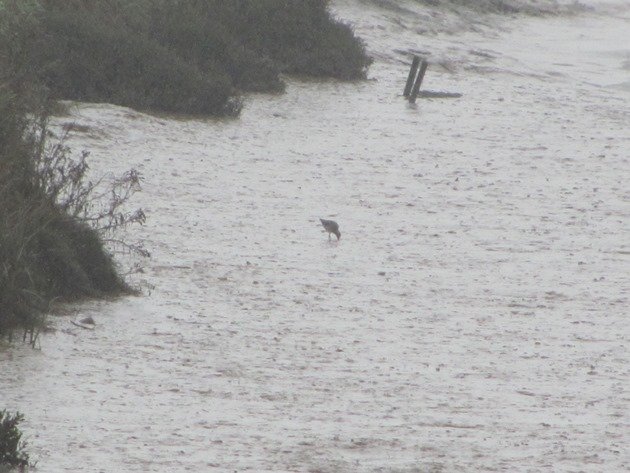 Long-billed Dowitcher feeding in the rain!

We then moved the car to an area where there is a picnic table, but it was a case of sitting in the car due to the rain! Another vehicle was there are two men with cameras were also parked there. We inquired if they were looking for the Long-billed Dowitcher and of course they were! They had driven across the country from Derbyshire to find this rarity! I could show them a poor photo I had only just taken and they were soon on their way to “twitch” the Long-billed Dowitcher! The sky slowly cleared and a flock of seventeen Long-tailed Tits were flitting around in the bush near the car and a Common Kingfisher landed on a boat moored in the channel. We braved the weather once again to walk from that area and observed Eurasian Curlew, Common Redshank, Ruff, Common Shelducks, Herring Gull, Grey Heron, European Greenfinch, Dunnock and Pied Wagtails. The sky was busy with flocks of Canada Geese, Greylag Geese and Pink-footed Geese. However, our biggest surprise after the Long-billed Dowitcher was a Eurasian Woodcock that was flushed by Mum! That was two “lifers” minutes apart!

As we left the car-park we had better views of the Long-billed Dowitcher feeding on the mud as the tide continued to go out. 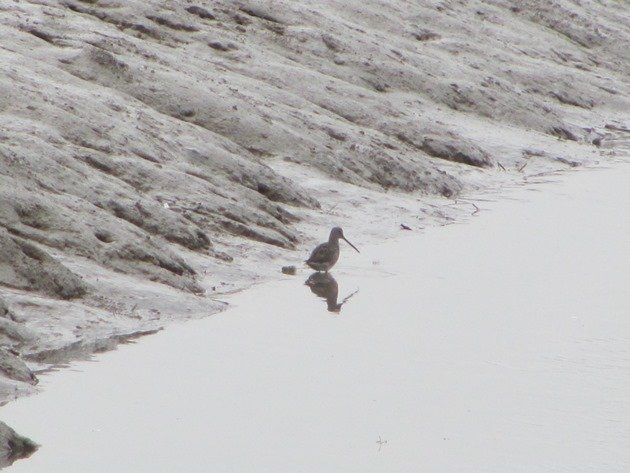 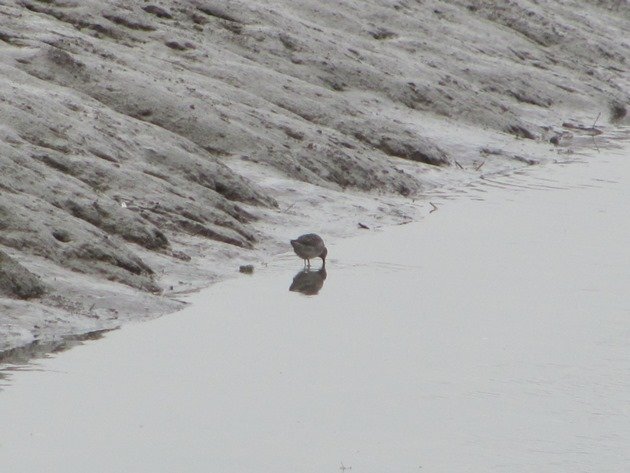 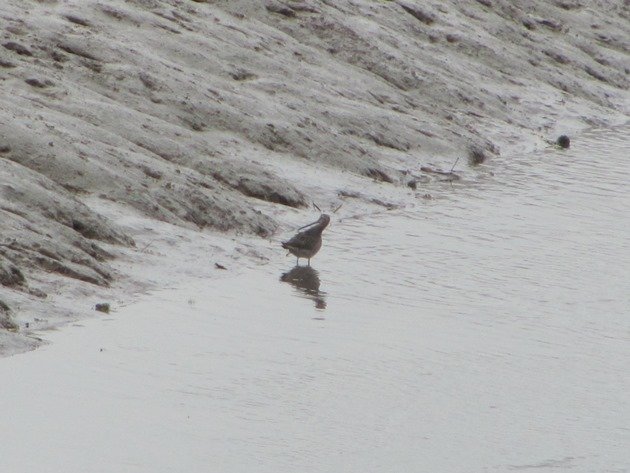 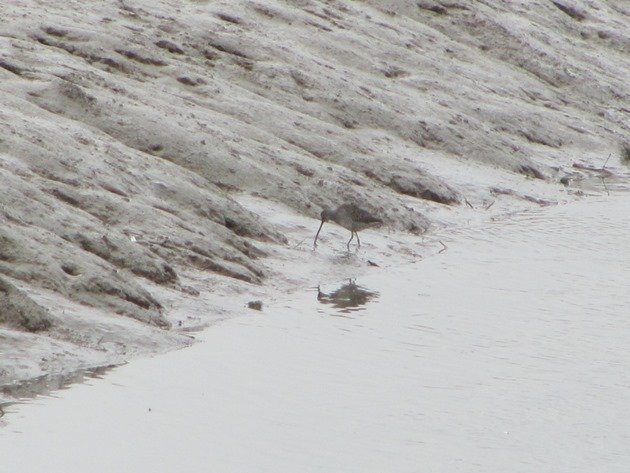 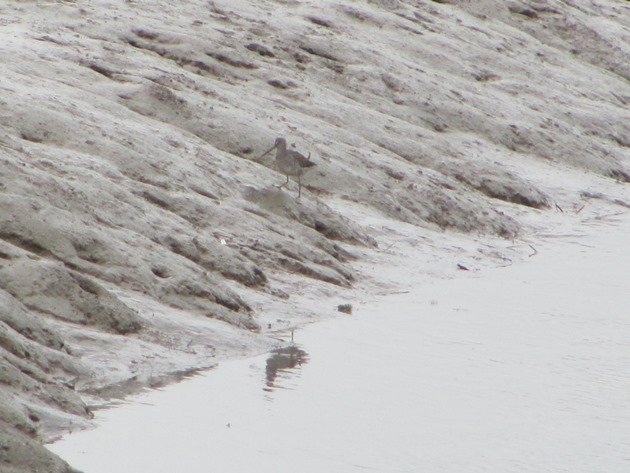 If you want to see some really good photographs of the Long-billed Dowitcher at Saltfleetby you can easily Google them! There are plenty of others who have observed the individual bird in better weather conditions! We were more than happy to find a Long-billed Dowitcher and a Eurasian Woodcock moments apart, especially considering we had not been on a “twitch” like the other birders that day or previous days or days since!! We still don’t know which area is “Paradise Pond”, but it appears the Long-billed Dowitcher prefers the channel to feed in and a good place to look! 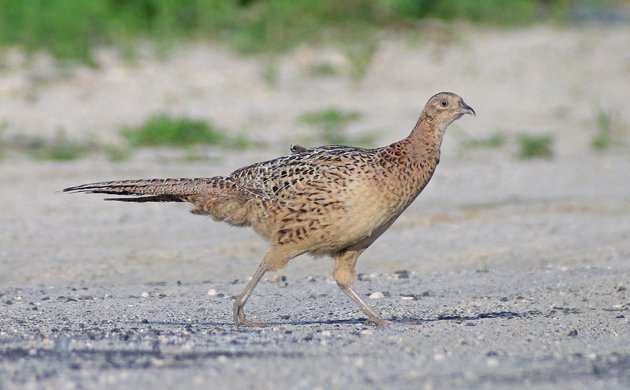 Where Are You Birding this Final Weekend of April 2009?