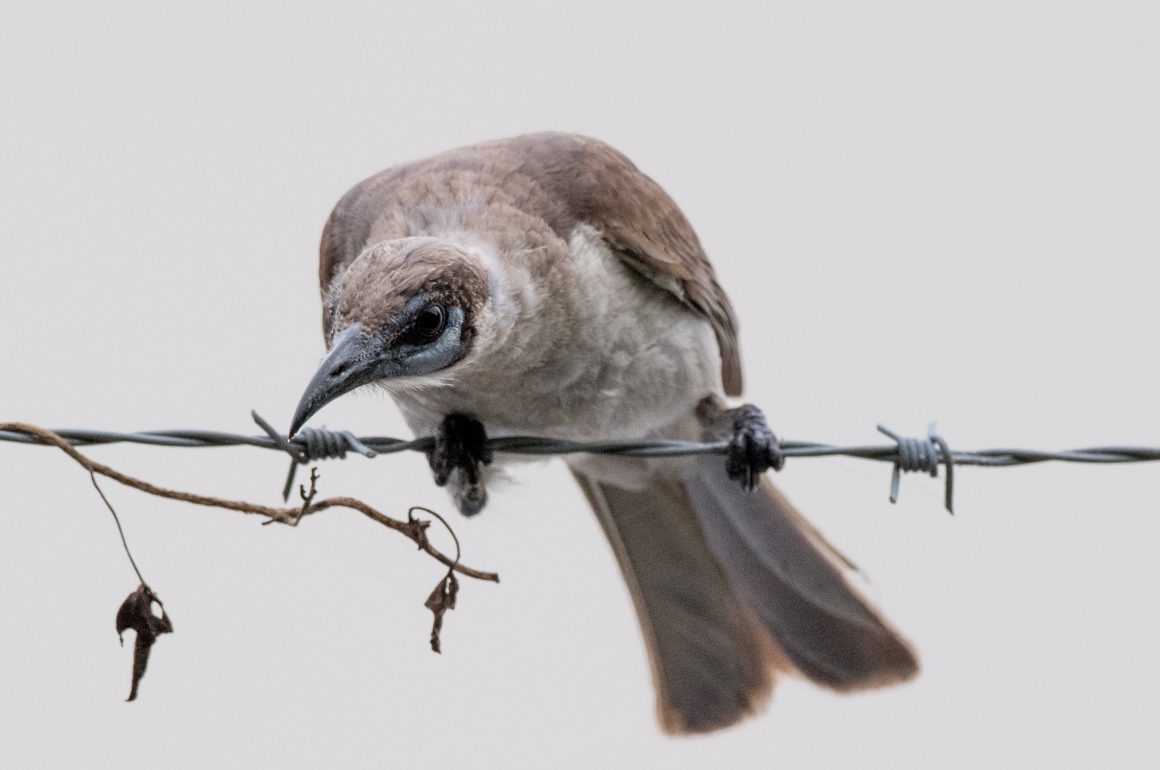 According to a bird guide published in 1911, “Competent authorities have proposed to divide the world, biologically, into two parts – Australia and the rest of the world, and they have considered Australia the more interesting part.” (quoted from Tim Low’s book “The Origin of Song”). So, even though this is a bit much, it seems justification enough to continue this series of blog posts – particularly as I wrote this series under lockdown in Shanghai, with nothing much to do.

One distinction is that birds in Australia are much more important as pollinators of flowers than elsewhere. For example, the Brown Honeyeater visits more than 300 different flowers.

Apparently, this honeyeater is also the most common one at Clare’s garden in Broome.

Wikipedia seems not too impressed with the species, stating that “the brown honeyeater is a medium-small, plain grey-brown honeyeater”. The Latin species name indistincta (indistinct, obscure) sounds similarly underwhelming.

Another honeyeater, the Blue-faced Honeyeater, has also learned to open sugar packets, like the Noisy Miner mentioned in an earlier post.

In the juveniles, the skin patch is green, not blue.

Not a very nice neighbor to have: “Like many honeyeaters, this species is often pugnacious, chasing competitors away from food sources, and mobbing, swooping or harassing potential predators to drive them away from the nest.” (source)

In this episode 3, we also finally get to meet a bowerbird – the Satin Bowerbird, to be precise.

This bower was only about 100 meters away from the accommodation at Lamington National Park. In fact, one of the staff there joked about the time David Attenborough first had a sumptuous breakfast at the hotel, then walked over to the bower, faced the camera, and started talking about being somewhere in the middle of nowhere in Australia.

I have heard that the color the males like best is yellow, but as the females prefer blue, this is the preferred choice for bower decorations.

I guess the females feel that the blue of the bower treasures works well with their eyes.

If you think that Beethoven’s 9th Symphony is his best one, you are wrong. But you will certainly like the Wompoo Fruit Dove.

The species was bred at the zoo of Memphis, Tennesee (source). I am sure Elvis liked it.

If instead, you are looking for more specific information on how to do eye surgery of the Wompoo Fruit Dove, I suggest you check out “The Journal of Avian Medicine and Surgery”, which should be available at your local newsstand. The article to look for is titled “Ceratospira inglisi Ocular Infestation in a Wompoo Fruit-Dove”.

After viewing these photos, it is a good idea to relax your eyes by looking at a Brown Songlark.

The legs of this species do not look particularly long to me, but the Latin species name cruralis (“of the leg”) and the HBW description (“a relatively long-legged terrestrial warbler”) indicate that my perception is wrong.

Similar to the (fortunately now gradually changing) situation among humans in China, these birds seem to prefer males over females. While females hatch from larger eggs and are initially heavier than their brothers, after ten days, the male chicks weigh almost 50% more than their sisters, as they receive a higher quantity and quality of prey from their parents (source).

Inexplicably, some of the other names for this species include blood tit (?), chocolate-bird (??), little fieldwren, and speckled jack.

As these photos fail to show beautifully, male Australian King Parrots are the only Australian parrots with a completely red head.

Friarbirds are honeyeaters that get their name from the circular pattern at the crown of their heads and their neutral coloring, which makes them resemble friars (source). The Little Friarbird is the smallest among the friarbirds, which makes sense, and has the Latin species name citreogularis, or “yellow-throated”, which does not make sense as the photos below and most photos online do not show any indication of a yellow throat.

However, they are by far the coolest-looking among the friarbirds, looking like they just come off the stage of a fairly bizarre S/M movie.

However, this species does not seem to have a very inspiring effect on Clare, my colleague as a writer for 10,000 Birds – see here for proof.

My late father had a few jokes that he liked to repeat frequently, which in itself was kind of funny. One, however, was potentially racist by today’s standards. So, I can only give you the sanitized version of the joke, in which humans have been replaced by birds.

A man sees some Black Swans. He asks “Has there been a fire here?”

(To be fair to my late father, I do not think he meant to be racist in any way, nor did he think this joke was really that funny).

The Galah looks like it has been designed by a straight male who desperately wishes to be thought of as gay.

If you live in Australia, do not even think of getting this bird as a pet, as “99.99% of these Galahs sold in Australian markets are trapped from the wild” (source).

The same website also warns that “Galahs are naturally destructive and noisy. Adolescent Galahs are prone to behavioral problems; they will become noisy, aggressive, and destructive if not provided enough physical or emotional support. At sexual maturity, some individuals may develop seasonal behavioral problems such as aggression and become challenging to manage.”

It might be better to adopt a random male teenager right away.

If you live in Australia and cannot afford a big or even a medium-sized cormorant, why not settle for a Little Pied Cormorant? As long as you do not have British friends (or people who have watched “Austin Powers”), you can also refer to it as Little Shag without embarrassment.

Potential new word learning alert: The Little Pied Cormorant is a benthic feeder, meaning that it feeds on the bottom of the water. Of course, you might just refer to this bird as a bottom feeder, but that might lead to misunderstandings, as this term has another meaning, “someone who occupies or tries to advance from the lowest position in society, politics, business, etc., by taking advantage of the misfortunes or dregs of others.” (source)

Wikipedia also has some highly specific information on the appearance of the eggs of this bird over time, something that I would not necessarily have needed to know: “They become increasingly stained with feces, as does the nest, over the duration of the breeding season.”

The alternative for people on a limited budget is of course the Little Black Cormorant.

The link https://blackkite.com/ leads you to a company named Black Kite which offers “Automated, continuous cyber risk monitoring”, something I have so far done without, probably explaining the limited success in my career. The website also clearly points out that the key values of the company are Integrity, Innovation, and Customer First.

On the other hand, the Black Kite is a raptor not known for integrity – Black Kites are opportunistic hunters and are more likely to scavenge (source).

However, they do display some customer focus – parent birds were found to preferentially feed the smaller chicks (source). And they are innovative – they are known to spread fires by picking and dropping burning twigs so as to flush prey (source).

So, two out of three – not too bad. I hope not too many customers of the Black Kite company ask their employees about their scavenging habits though (“Is this something your company strongly identifies with?”)

You know a bird species is in trouble when even the usually enthusiastic people from eBird describe it as a “small plain bird with thin bill”. But that is the kind of body-shaming that the Mangrove Gerygone is routinely subjected to. Only the vocalization of the bird gets a positive mentioning – “a tinkling melodious string of notes moving up and down in pitch”.

And my hopes of at least giving you an interesting factoid about the Latin species name levigaster – could have been a Nazi war criminal turned Australian ornithologist – also quickly faded when I learned that leviter stands for Latin lightly, and Latin gaster for belly’.

According to Australian Geographic, “Splendid fairy-wrens are arguably the most beautiful species of fairy-wren”. How do you think reading this makes me feel when I only got a decent photo of the female (or immature male) of this species?

It is almost certainly a rumor that writing a post about Australia and not mentioning dingos is illegal, but why take the risk? 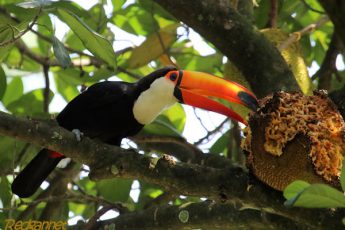 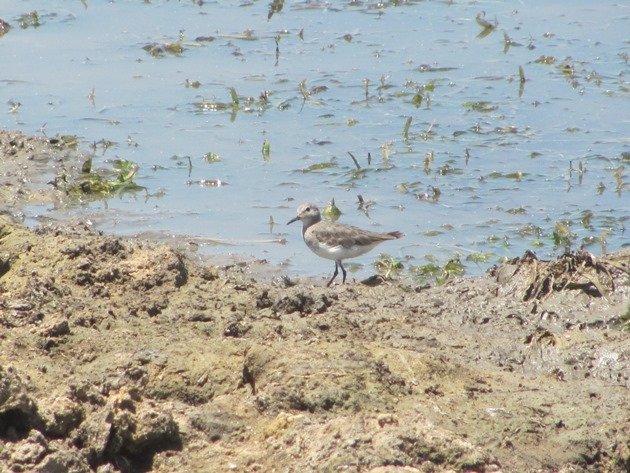