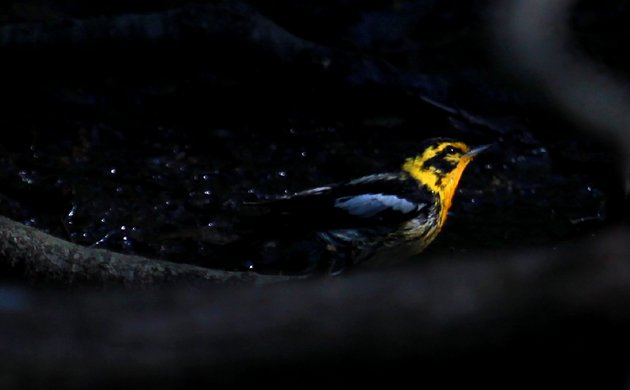 There is little that I like to do more in Spring than join the throng of birders at the Forest Park waterhole and wait for the wood-warblers. The ephemeral pond waxes and wanes depending on the amount of rain, sun, wind, and heat that we are experiencing in Queens. It is an oasis in the urban forest when there is water and the birds can’t resist stopping in for a drink and a bath.

Thursday after work I spent a couple of hours at the waterhole watching and photographing the birds coming in to the water. It was a relatively slow evening but I still tallied eighteen species of wood-warbler, to say nothing of orioles and tanagers and thrushes and vireos. It was great despite the lousy light.

What follows is some of the images that I got on Thursday with some commentary. The pictures aren’t all of the best quality but they are representative of what you will likely get at the waterhole unless you get lucky and have a wood-warbler land very close to you. Wilson’s Warblers usually show up in small numbers at the waterhole but this year has been a banner year for them, with at least one being seen multiple times a day for over a week. You can often catch a bird preening after its bath, like this Black-and-white Warbler is doing. They usually hide back in the bushes though, so it is often tough to get an unobstructed look. Stunning birds like this Magnolia Warbler are relatively ho-hum at the waterhole. If you spend any amount of time at the waterhole you will see American Redstarts in a variety of plumages, like this young male. The waterhole usually attracts both species of waterthrush but this year when the Louisiana Waterthrushes were moving through the waterhole was dry. We’ve had to settle for this long-staying Northern Waterthrush.

Not a fan of warbler-neck? Wait by the waterhole for canopy-dwelling birds like this Tennessee Warbler to come down to you! Common Yellowthroats are common. But they entertain you when there is a lull in the more interesting birds.

It’s also fun to see multiple species in one field of view. Here a Wilson’s Warbler bathes while a Northern Parula looks on enviously. Do I live in the coolest place or what?