Although the title to this post may be incomprehensible (think Brylcreem,) its topic is straightforward. For birders, the word ‘dabble’ usually calls to mind ducks. Why ducks? Because there are two kinds of ducks in this world: the dabbling kind and the diving kind.

Dabbling ducks are not, as the name might imply, the dilettantes of the waterfowl world, unwilling to work in a serious manner. The word dabble also means to splash around or paddle in water. Dabbling ducks, also called dabblers or puddle ducks, are ducks that feed by foraging on the surface of the water. New York’s two most common ducks, Mallard and American Black Duck, are both dabblers, as are teals and wigeons. While their behavior is an obvious giveaway, birders hoping for an identifying field mark should look for an iridescent speculum, or wing patch.

Diving ducks do not dabble at dinner. Instead, as one might expect, they dive. Diving ducks feed on aquatic plants, fish, insects, mollusks, and crustaceans that require a bit of effort to reach. Therefore, they must submerge themselves completely to dine. Often, they dive to considerable depths. The diving duck family ranges in size from petite (Ruddy Duck and Bufflehead) to prodigious (Canvasback.) Sea ducks like scoters and eiders are also divers. The same adaptations that serve divers so well in the water impair their flight ability. While dabbling ducks can fly out of the water from a seated position, diving ducks have to run across the surface to build up enough speed to take off. 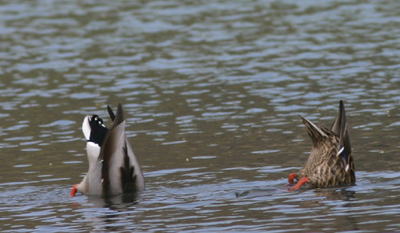