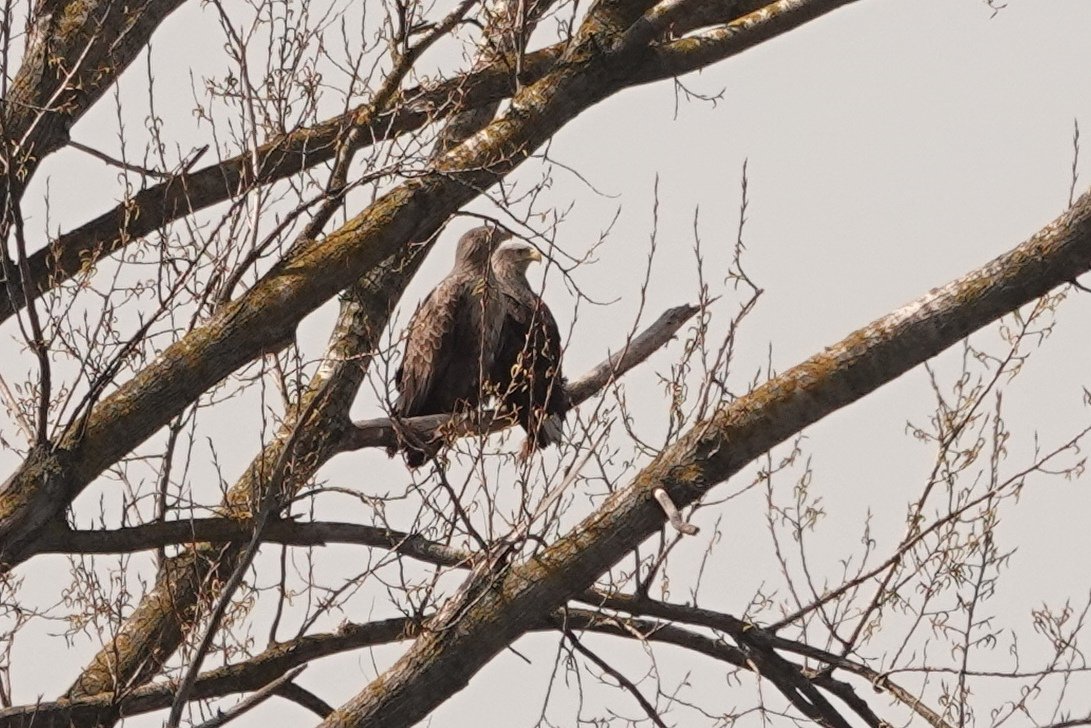 The White-tailed Eagle is one of the easiest birds to observe in Belgrade, Serbia (almost guaranteed). There are about ten pairs around the city. One pair even breeds on the island at the very confluence of the Sava and the Danube rivers, less than a mile from the central city square. Ten pairs mean 20 territorial adults staying here year-round, plus usually 20 young birds every spring, plus more than 20 immatures overwintering in the Danube backwaters. And with a wingspan slightly bigger than a Bald Eagle, it is really no wonder that almost every local eBird list contains a sighting of one to several birds.

Birding along the Danube levee around the Beljarica floodplain (Beh-LYAH-ritza) the other day, I eventually reluctantly entered 8 WT Eagles into eBird, curious whether I might have seen 10 individuals, but not entirely sure if I saw the same pair twice. That particular pair attracted a lot of attention from local bird photographers this spring, because they were eager to pose together. But WT Eagles lay eggs in late January or, if it is too cold, in early February, and no breeding pair can afford to pose together afterwards, because one bird must protect the eggs or chicks from elements or predators at all times.

Yet, these particular birds were just soaring together, or standing next to each other on some tree branch, in February, March, April… I observed two birds in a territorial soaring flight in mid-November last year, then one of them was already preparing the nest in early December. From then onward, I didn’t want to visit the vicinity, in order not to disturb them when they are at their most sensitive.

My next visit was by the end of February, and the pair stood together in their favourite tree, indicating that there were no eggs in the nest. However sad, the most likely hypothesis was, one bird died and the survivor is now pairing with a new bird. 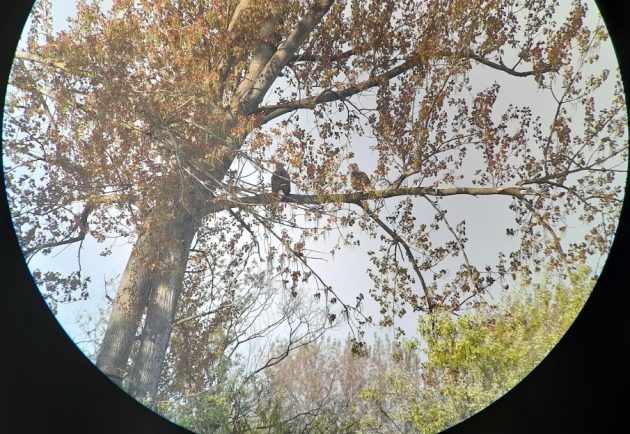 In mid-March, there was a subadult eagle calling in flight (its age indicated by a dark terminal band on an otherwise white tail), and afterwards, two birds standing in that same tree, an older adult and this younger bird, spreading its wings to dry after a fish-hunt. The younger bird appeared larger and, since females are 20% larger than males, I presumed that it is the new female, after the old one succumbed to some ill-fate. Still, due to their different standing positions, I am not entirely certain of their genders. Only a little bit later, I observed 6 birds circling in the same thermal.

In April, I observed this pair twice, soaring or perched (photo inset). By the end of a month, I received a report from Istvan Ham, a biologist and a raptor expert, who visited their nesting tree and confirmed my assumptions: “Under the nest, I found a dried-up carcass of a dead WT Eagle (I couldn’t estimate the sex), but the bird died during the winter (maybe in January?) as a consequence of poisoning – its toes were totally contorted (I didn’t touch the remains and they remained on the spot!). Therefore, with the loss of one bird, there was a pairing with a subadult bird, and that is why there were those displaying flight and that ‘posing’ in February and March. So next year we can expect nesting here.”

And this silly honeymoon will likely continue until the next egg-laying season in January 2022. Till then, bird photographers will have their day.

Wood-Warblers at the Forest Park Waterhole