This past Saturday afternoon I was out on the beach in the Rockaways with my family. We were taking advantage of one of the many warm and sunny days we have enjoyed this fall, looking for cool shells, getting our feet wet in the surf, and just generally enjoying ourselves. Of course, I had my binoculars and camera with me because you never know what might show up on the coast and I was pleased to find a trio of Royal Terns present, an adult accompanied by a young bird and an additional adult whose relation to the other two birds I could not discern. Royal Terns are interesting to me as a New York state birder as they are exclusively coastal and almost entirely a bird we see in fall after they disperse from their breeding grounds. And while I had a vague idea that they bred somewhere to our south I always wondered exactly where the birds we see in Queens, sometimes in numbers, come from. 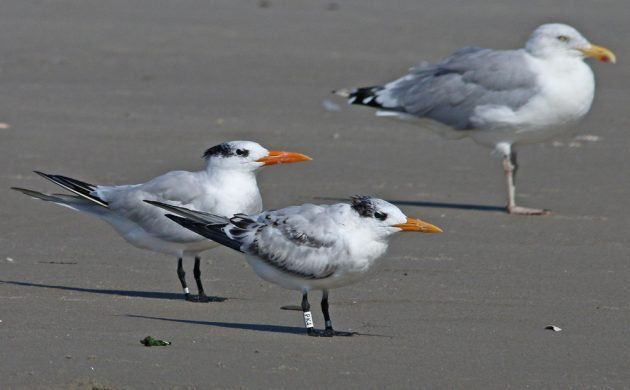 The young bird, its parent, and a Herring Gull.

So you can imagine how cool it was to realize that the both the youngster and the adult with it were banded and, even better, the young bird had an easy-to-read color marker on its leg. Black letters on a white band on its right leg, reading “PK4.”  I knew that with just that information I could report my sighting online and eventually get a reply. But eventually turned out to be much sooner than expected: I reported the band on Saturday night and had a response on Monday night!

I couldn’t get the numbers off of the metal bands that both birds are wearing. It’s a shame, as I’d like to know when the adult was banded.

The  young tern was banded near Chincoteague, Virginia, on 17 July of this year when it was still too young to fly. A little over two months later I saw it nearly three hundred miles to the northeast. Not bad for a young bird! I still don’t understand, however, why this southern tern species makes its way north after breeding season is done every year, only to return south for the winter. I assume it must be less competition for more food but if anyone can shed any specific light on this post-breeding dispersal I’d love to learn more. 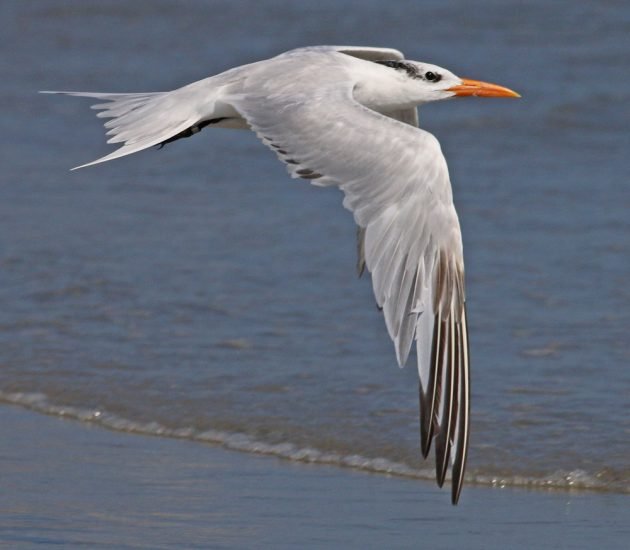 Why do Royal Terns come north to New York waters every fall?

It’s nice to find a banded bird and get the information reported. I always imagine that getting this kind of information back must make the bander’s day, especially when the band was put on a bird too young to fly.

I will say that being a Royal Tern parent must be a royal pain in the butt. The young tern almost never stopped begging and it was constantly trailing its parent.

Here’s hoping that this young bird continues to thrive and manages to make each of its migrations successfully until it leads its own young up to New York waters for me to see in a couple of years! 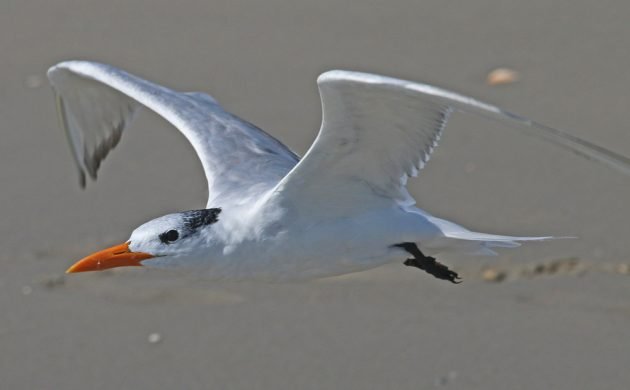 The other adult, much less harried than the one being trailed by a kid! 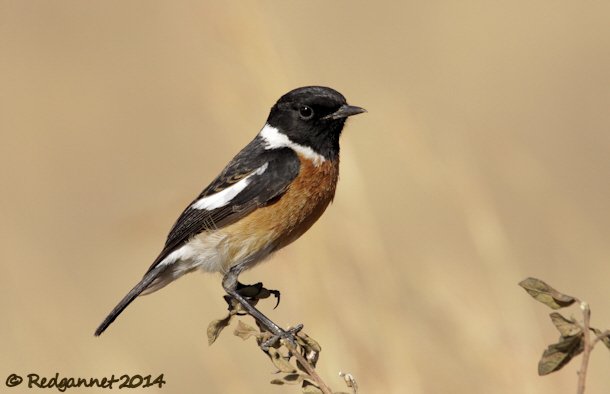