Heaven for more than Hummingbirds 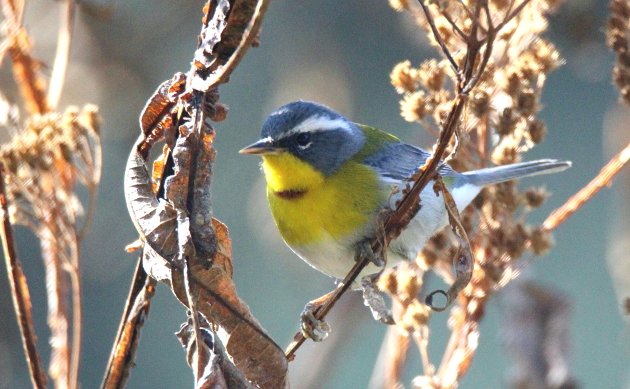 Last week I told you about one of my favorite places to visit at this time of year, the tiny town of Laurelito, Michoacán, Mexico. This spot, just south of my city of Morelia, has the largest bank of Salvias in my area. As such, during September and October it turns into what I call “Hummingbird Heaven”.

But Laurelito offers more than that autumn experience. Over the past few years, I have personally registered 132 species from the town and surrounding area. In fact, I put the site on my regular rotation long before I discovered its abundance of autumn hummingbirds. What really put Laurelito on my map was the discovery that the area holds a healthy population of Red Crossbills, a bird I have only once seen anywhere else in Mexico.

Upon arrival. I park next to the town’s little Catholic chapel. From there, it is always worth searching the mature pine trees uphill for Brown Creepers and many warblers, including the resident Olive Warbler  (not a true Wood Warbler!) and a good number of winter migrants. MacGillivray’s Warblers can be found in winter on the way downhill to the main group of houses, as well as White-breasted Nuthatches in the lower pine trees. 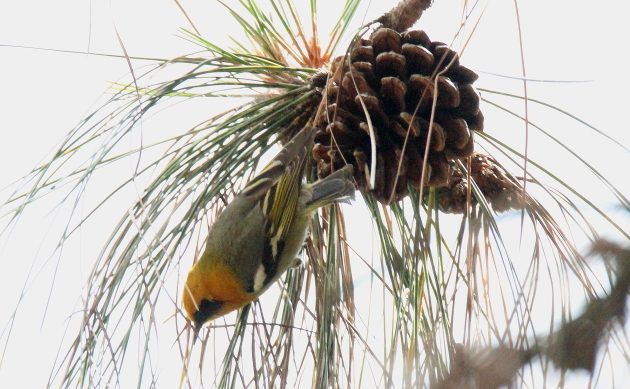 For once, this Olive Warbler came down low enough for a decent photo.

Then, whether or not it is not peak hummingbird season, I move on to the town’s salvia beds. Even when these have stopped flowering, they attract a wonderful variety of species. Just this past June, the seeds from the previous years’ rainy season attracted Crescent-chested Warblers and Black-headed Siskins that allowed me some good photos. 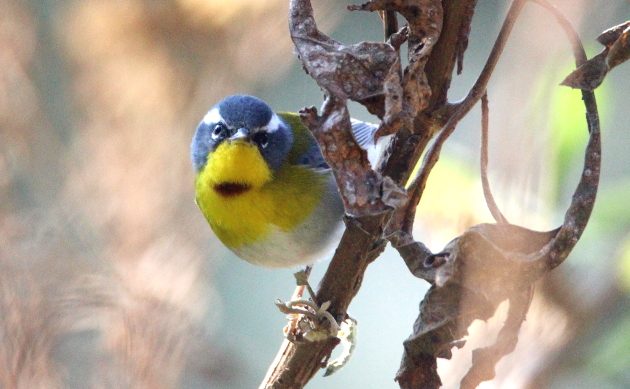 Then I turn back in the direction of the chapel, but slightly to the left, which takes me further downhill. This path goes in the direction of an area which often has water running along the surface, and it is where I have my best chance of seeing Red Crossbills. Only once have I seen this species anywhere else in my region, but at Laurelito, I have seen them ten times so far. Although I’ll admit, not many of them are true red. 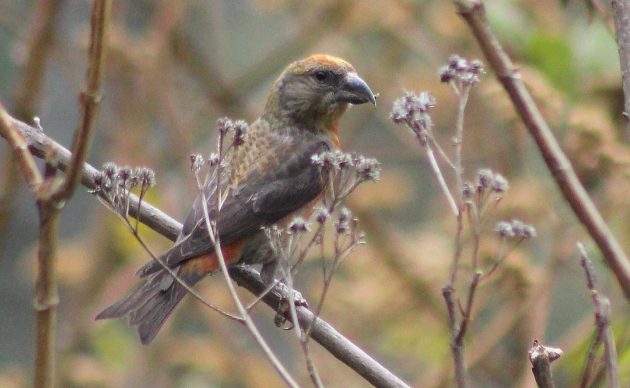 My first photo of a Laurelito crossbill was of a horribly backlit silhouette. Only the unmistakeable form of its bill let me know what I had seen. But the next time I saw crossbills there, it was a sizeable group, accompanied by another pine-dependent species: the Pine Siskin. They were both spending lots of time on the muddy ground, for all appearances ingesting the mud for minerals, like tropical parrots sometimes do. I would love to hear from my readers if they have ever observed such a behavior among these species! Or, perhaps, they were just searching for seeds in the mud? 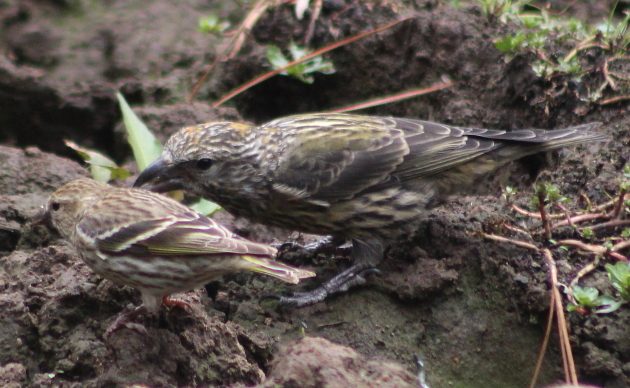 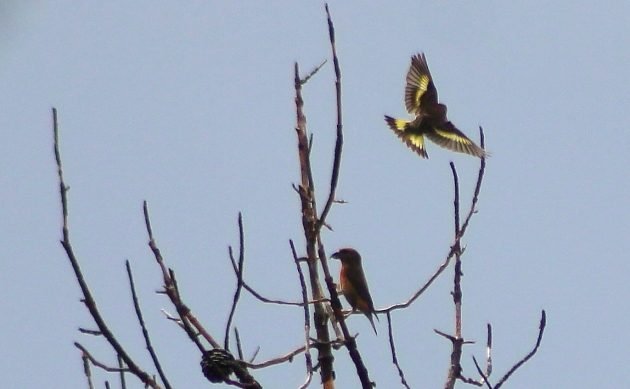 Beyond this marshy area the pine woods eventually open up to an area of grasslands, with some oaks and pines and lots of eucalyptus trees. This area always has lots of Eastern Bluebirds and Yellow-eyed Juncos. But in winter, it has even more Yellow-rumped Warblers (of the Audubon’s variety), since that species loves the scale insects that thrive on eucalyptus. It also offers the possibility of seeing species like the Painted Redstart, Northern Pygmy-Owl, and Elegant Trogon. 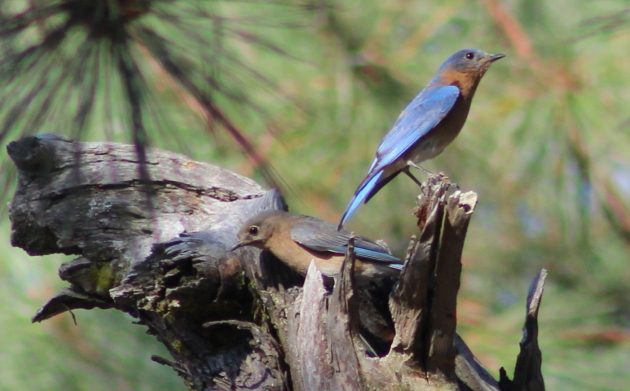 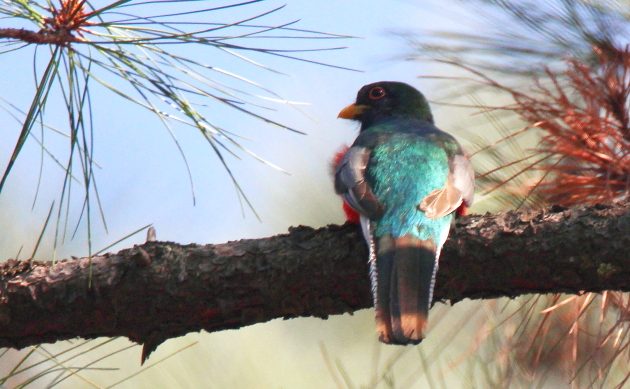 Sorry. This is as good a photo of the Elegant Trogon as I’ve achieved so far. But it is from Laurelito.

At this point I turn left and move a bit closer to the little river flowing through the lowest terrain below town. As I follow the river upstream, there is a band of woods separating the previous open area from another, smaller one. There always seem to be a Greater Pewee and a White-eared Hummingbird or two in these woods. But once, I was surrounded by a large group of Acorn Woodpeckers chasing each other around, with what appeared to me to be playfulness, and a single Transvolcanic Jay joined in the fun. It remains one of my very few sightings of this endemic species anywhere near the ground. I have also seen nests of Plumbeous Vireos and Berylline Hummingbirds here. 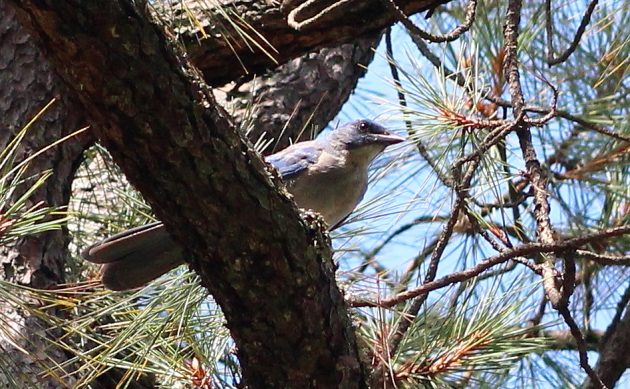 This is the Transvolcanic Jay, not a similar Scrub Jay. 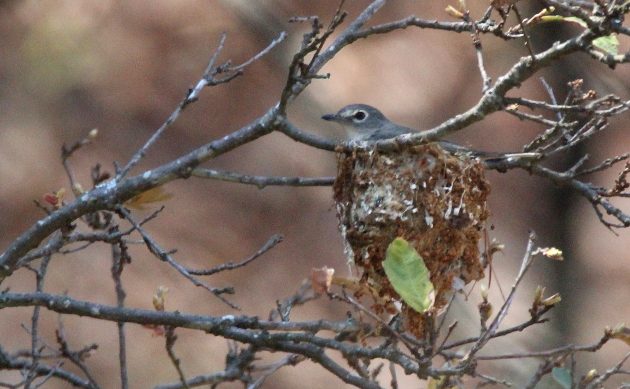 Finally, I loop through the tall and dense woods southeast of town. Here, the Painted Redstarts give way to Slate-throated Redstarts, and in winter, I just might get lucky and see a Red-faced Warbler. 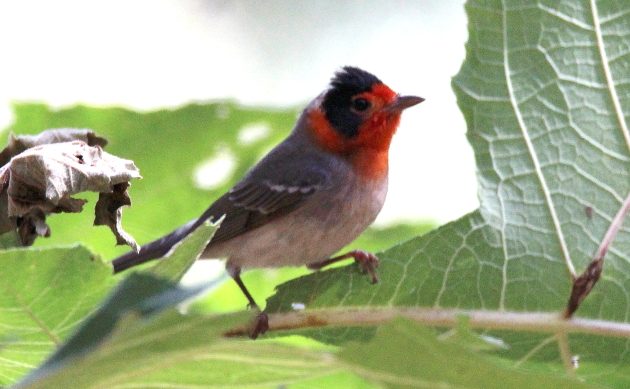 Which brings me back to town, and those salvia beds with their many surprises. Summer Tanagers are not the most unusual species I can see, but I liked this photo taken above the salvias, so I will close with this lovely  female. 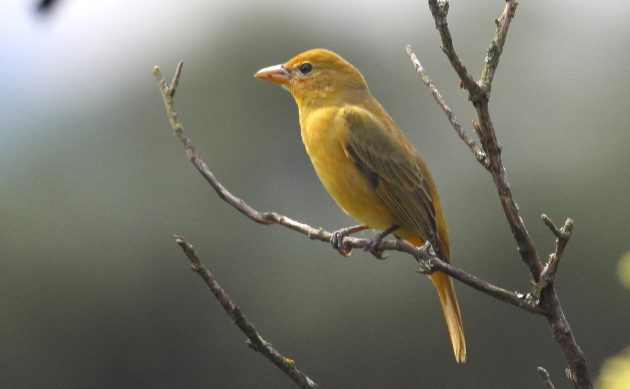 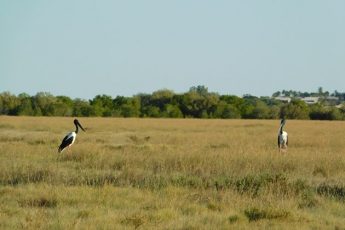 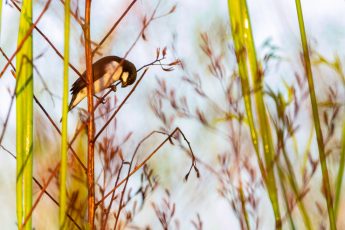 « Previous post
The benefits of hurricanes in Southeast Arizona
Next post »
A Young, Banded Royal Tern and Where It Came From