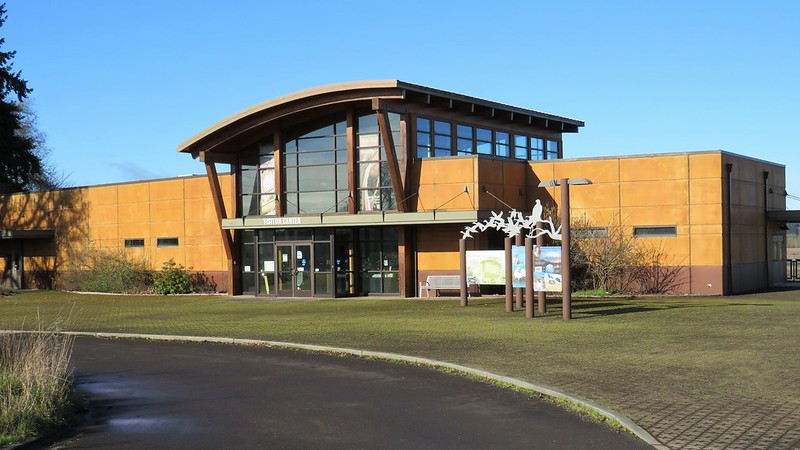 A recent episode of the American Birding Podcast featured an interview with Virginia Rose (Founder and President) and Freya McGregor (Coordinator) of the non-profit Birdability. The mission of Birdability is to “share the joys of birding with people who have disabilities, and to ensure that birding is accessible to everybody.” They spoke passionately and effectively about making birding accessible to everyone.

This is an admirable goal and surely one shared by most birders. However, I realized that I know little about the accessibility of my birding locations.

So armed with some knowledge from the “Access Considerations for Birding Locations” page on the Birdability website and some research, I twice visited the Tualatin River National Wildlife Refuge near Portland, Oregon with accessibility in mind. (eBird checklists are here and here.)

I do not (yet) have any accessibility issues, and my only experience regarding anything akin to accessibility has been limited to the period when my daughter was in a stroller, which presents only a tiny sliver of the challenges faced by many.

Some access issues are addressed by federal law. The Americans with Disabilities Act (ADA) was passed by Congress and signed into law by President George H.W. Bush in 1990. Among other things, it mandates certain accessibility requirements for all new construction of “public accommodations” after 1992. Public accommodations include government buildings, stores, hotels, transportation hubs, hospitals, schools, restaurants, etc. Thus, all buildings open to the public that are less than about 30 years old likely comply in some way with the ADA.

The ADA requires various accessibility standards, including the ramps, parking spaces, and restroom stalls, that we all recognize. Accessibility advocates consider the ADA requirements a floor rather than a ceiling, and an ADA-compliant location does not mean the location is accessible to everyone. There are many types of disabilities and many different types of accessibility challenges. This post focuses on physical accessibility. 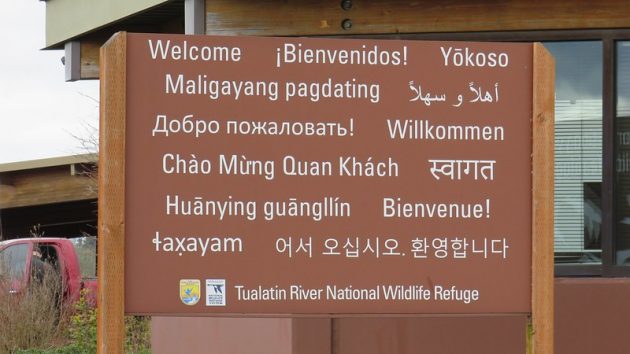 The Tualatin River NWR is an urban refuge just a few miles from downtown Portland. The website has some information regarding the trails, and the Friends of the Tualatin River NWR website has more. The refuge also has a writeup (including a video) on a website called Access Trails, which has accessibility information for 36 trails and parks in the Portland Metro Area. Thus, there is a good amount of online information for planning purposes. (I also did a post about eBird Mobile Track using the refuge as an example.)

The refuge has an impressive visitor center that opened in 2008, so it is ADA compliant. The visitor center has restrooms, exhibits, classrooms, a store, and helpful folks at the information desk to answer questions. However, because it is closed due to COVID-19 and I could not take photos, this post focuses on outdoor amenities at the refuge. This post is picture-heavy because I think it is helpful to see everything, but the blog only supports small images, so larger versions (and even more photos) are on Flickr.

The refuge is a popular birding location and approximately 230 species have been observed by about 1,400 birders who have submitted nearly 8,000 checklists. The eBird hotspot for this part of the refuge is: “Tualatin River NWR–Atfálat’i Unit.”

The refuge is free and has no fees of any sort. Most people arrive by car, but there is a bus stop nearby, and there is a short trail (perhaps .2 miles) from the visitor center to the bus stop. Pets are not allowed, nor are joggers, runners, or bicyclists. Hunting is also prohibited in this area of the refuge. My impression is that it is a fairly safe area and families are a common sight on weekends, as are school groups.

The large relatively flat parking lot has three dedicated handicapped spaces, at least one of which is van-accessible, meaning it has an area for a ramp out of a van. (That’s the hashed-out area to the right of the top space in the photo below.) The visitor center is the building on the left and the FWS refuge headquarters is on the right. An observation deck is between them. 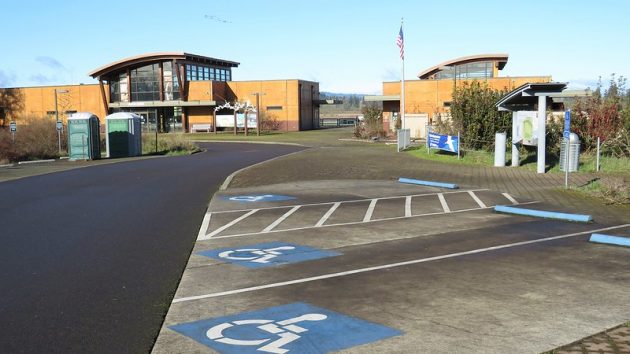 From the parking lot, there are ramps and cutouts to the sidewalk area, so there are no stairs or other obstacles that I could see. The parking lot is well-maintained asphalt and concrete, and the walkways are water-permeable concrete pavers (below) that appear fine for wheelchairs, scooters, or walkers. 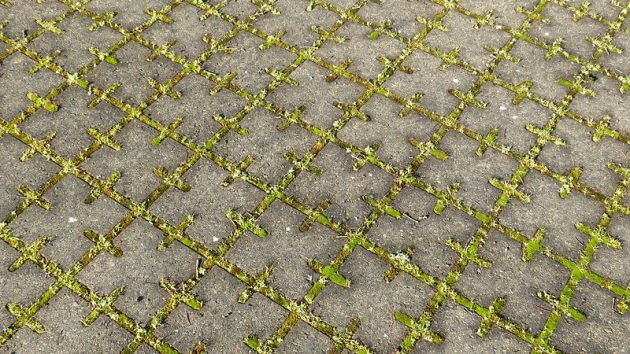 As indicated in the photo, the visitor center is near the parking lot, and most birders start with the observation deck near the visitor center, as it overlooks a seasonal pond/wetland that is actively used by waterfowl, particularly during winter. The visitor center overlook has a relatively low wire-mesh fence that appears to provide good visibility, whether standing or sitting. The area is flat and there is a bench. 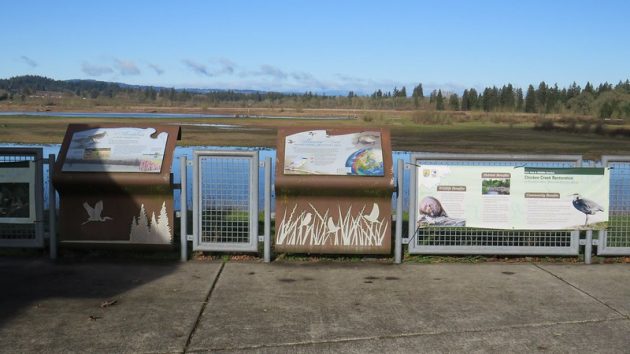 Directly off the parking lot are the restrooms and a picnic area. The restrooms are also closed due to COVID-19, but the signage indicates that they are ADA-compliant. (Although the restrooms are closed, there are two temporary port-o-potties, one of which is the larger accessible version.) 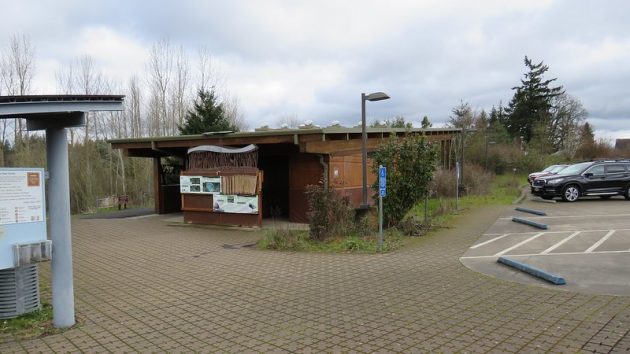 The front of this building is the restrooms and the back is a covered education/picnic area. One of the tables has an extended top for wheelchair users, something I had surely seen many times, but had never actually noticed. Indeed, before reading the Birdability website, I was completely unaware of such tables. 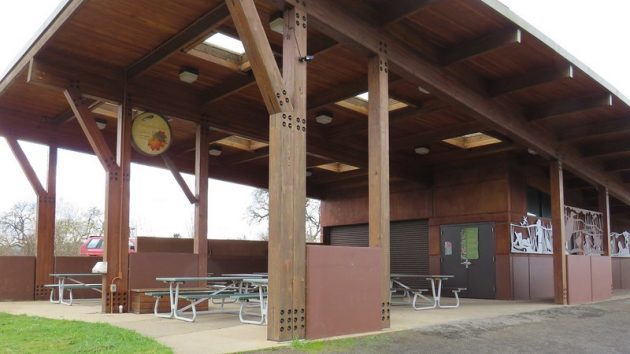 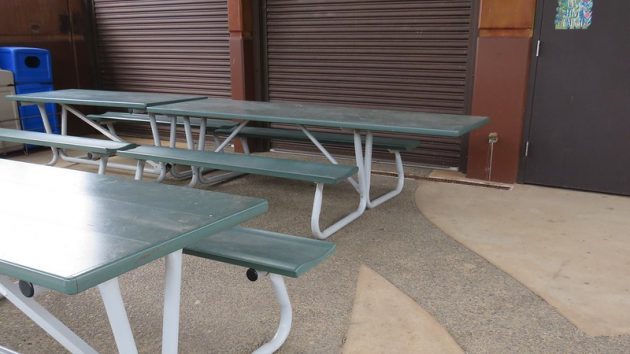 Near the picnic area are drinking fountains and a bottle filler that appear to be accessible, as they are at multiple heights and have knee space. 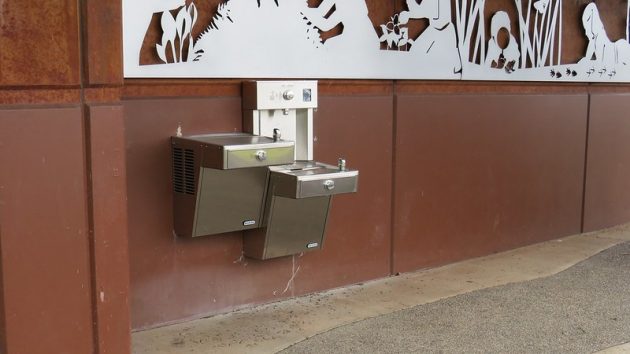 Although there are several longer trails, they are closed for waterfowl during the winter, so the primary all-season trail is the River Trail, which is an out-and-back that leads to a Wetlands Observation Deck. The trail is one mile each way, for a total of two miles.

A map at the trailhead provides details about the trails, including distances and the trail surfaces. (The trail map is also available online.) It also provides the slope of the trail, which does not exceed a 5% grade. However, there is a spur up to a ridge that has a steep grade, and it is noted. The sign appears to provide maximum grade, but not average grade, which can be useful. 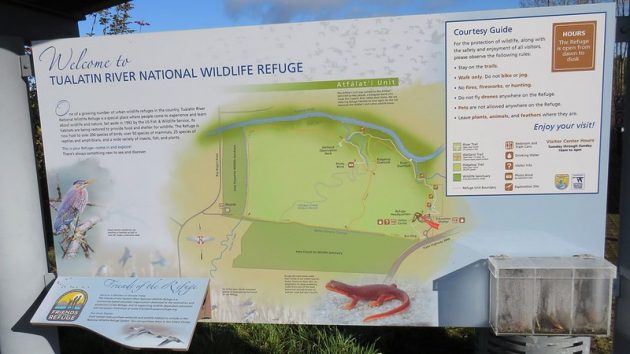 The trail begins with its steepest grade, though the map states it is less than 5%, which I confirmed with an app. A 5% grade is steeper than I thought, but research suggests that 5% is acceptable. However, other than this short initial section (below), most of the trail is relatively flat. 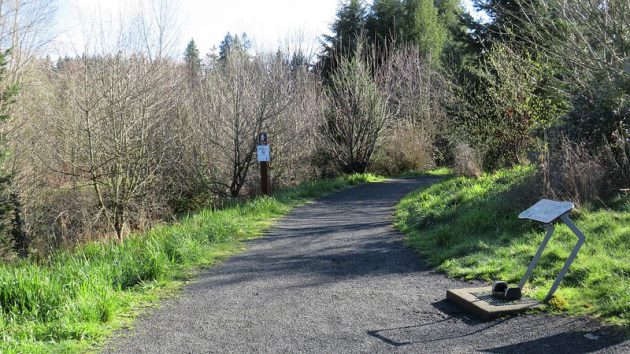 The initial part of the trail is compacted crushed stone, which I understand to be a good surface. It appeared to me to be relatively flat and without a substantial side-to-side slope. It is well-maintained, without significant potholes, roots, or other issues. 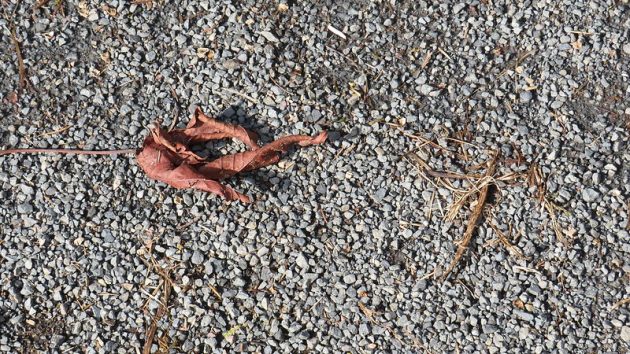 The River Trail runs alongside the namesake Tualatin River for a distance and there is an overlook that juts out over the river and provides fine views. The overlook is concrete and it is flush with the trail surface. The barrier is mesh and some panels have cutouts to provide better views for sitting users. 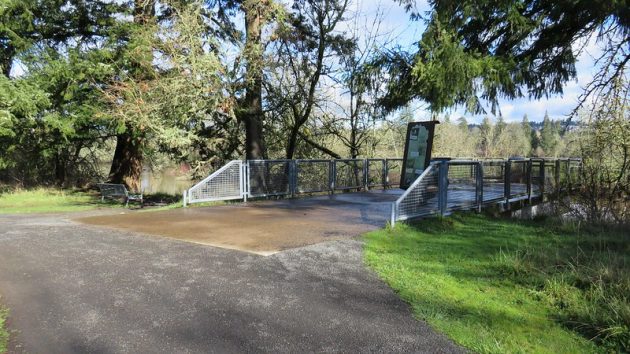 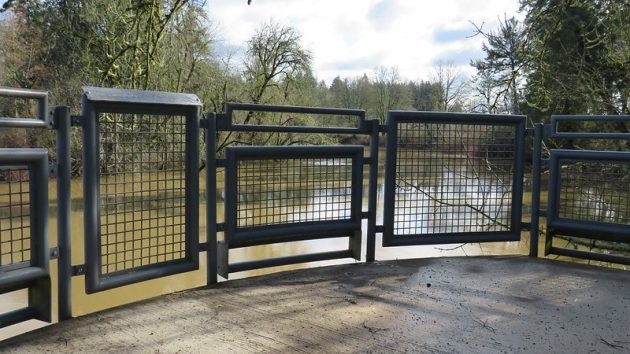 Although the beginning part of the trail is open, it later enters a shaded woodland, and the compacted gravel path gives way to a more natural surface. However, it remains relatively flat and well-maintained, at least to my eye. 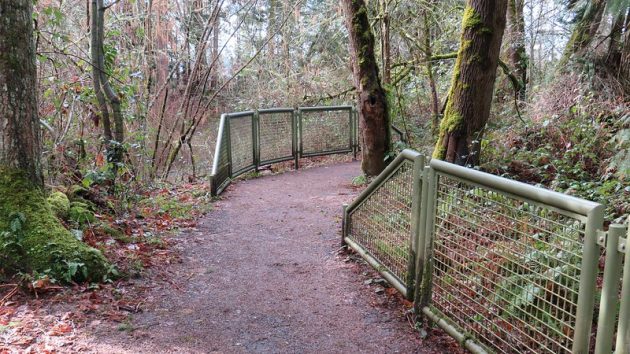 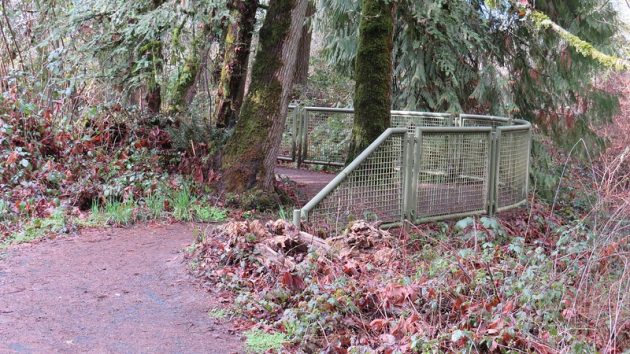 There are two bridges on the trail and they are wide and flat, and the trail and bridge surfaces appear largely flush, so there is no step or gap. 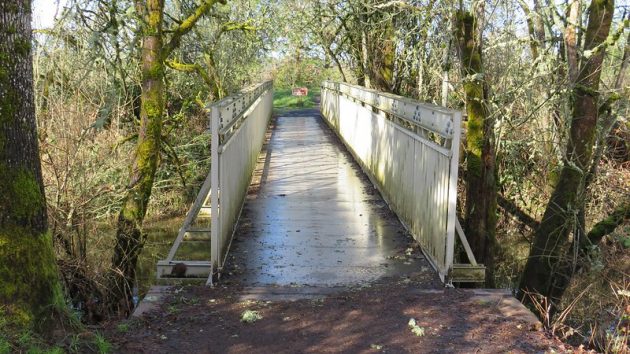 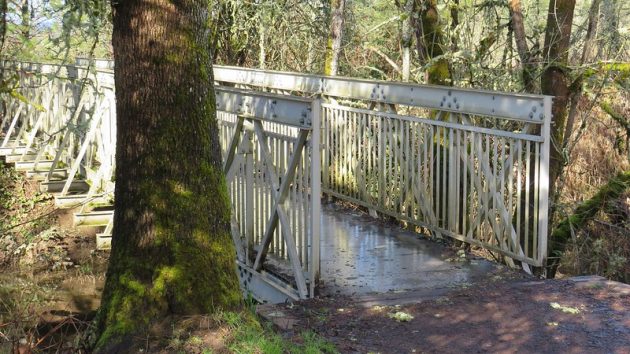 The trail ends at the Wetlands Overlook, which is an elevated concrete structure with a wire-mesh fence, several interpretive signs, and another bench. 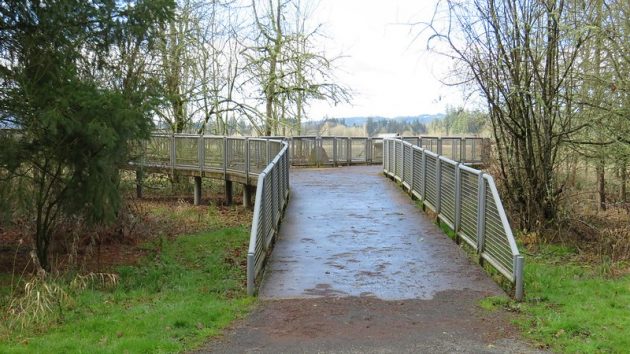 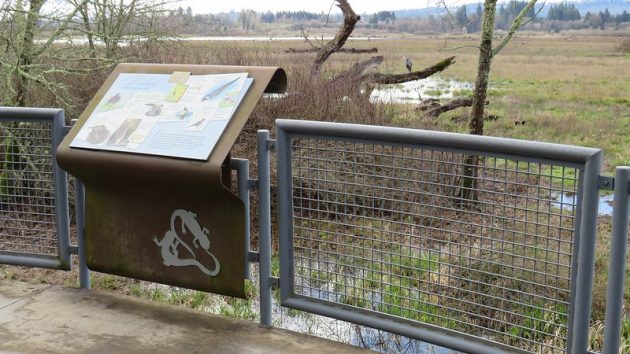 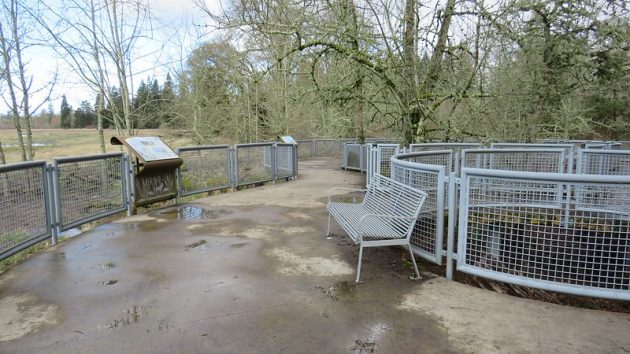 There are at least a dozen benches along the one-mile trail, and most have some sort of armrest to help those who need some additional leverage to get up or down. As far as I could tell, there were no bollards or gates or other barriers on the trail.

Because the refuge is fairly new, I figured that it would grade out pretty well on accessibility. Although I surely missed some things and do not have any training or experience to make a proper evaluation, my impression is that it is pretty good. If accurate, it seems to me that one of the better birding hotspots in Portland, Oregon is relatively accessible.

Next time you are at one of your favorite hotpots, look around to see how it rates on accessibility. It is an eye-opening experience to view a familiar place from a new perspective.

If I have missed something or if the photos here or in the Flickr album raise additional issues, please let me know in the comments. 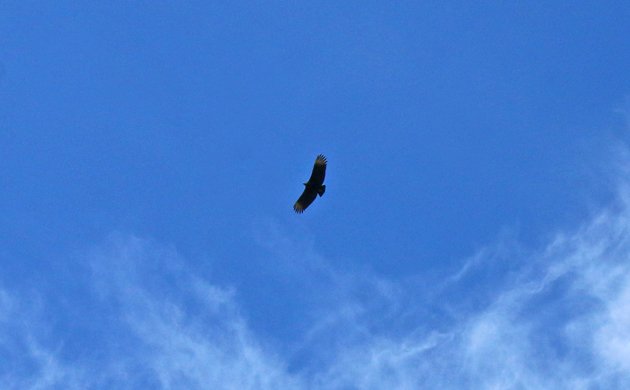 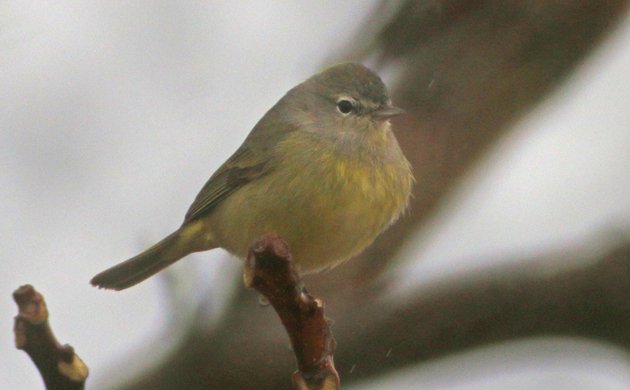