We felt awash in blues as our tour boat skirted the waves to anchor near a shallow sand flat off of Key West, Florida. The aquamarine water gave the sky a run for its money, so clear and sparkling beneath a noon-day sun. Mangrove islands broke the horizon with their green silhouettes, the golden sand of beach patches rising here and there to add even more color to the landscape. If you close your eyes and imagine “paradise,” this vista would be it.

I was on a workshop field trip, learning about  marine protected areas as my group snorkeled on one of the area’s famous coral reefs. In addition to sharks, barracuda, rays, and fishes, we had also spotted Double-crested Cormorants, Brown Pelicans, and Magnificent Frigatebirds. As we pulled to a stop at the sand bar and hopped out into the hip-deep water, I literally couldn’t believe my eyes: a flock of American White Pelicans. 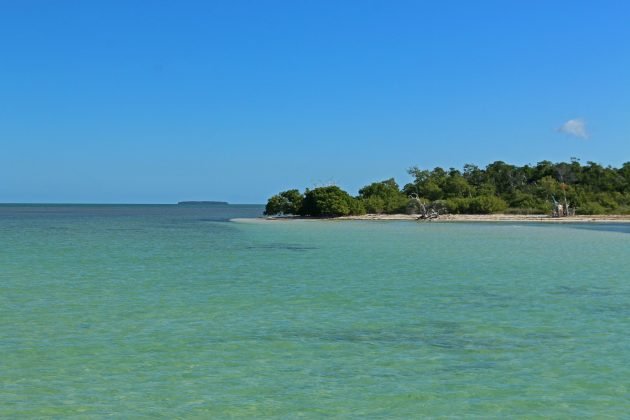 I should not have been too surprised to see them; American White Pelicans winter in Florida and I had already counted dozens of their brown cousins diving into the colorful waves. But they were just so white, huddled in a floating flock. They were so bright, in fact, that I had trouble finding camera settings that wouldn’t just create white blobs in the middle of my digital screen. Because no clouds dared to dot the perfect blue sky, the pelicans were actually the only white marks on the entire seascape in front of us.

American White Pelicans represent a conservation success story, and so their appearance was rather perfect for our group, as we were dedicated to learning about environmental conflict resolution. Their populations have grown about 5% every year since 1966, and their global breeding population is now larger than 120,000 birds.  Still, they are sensitive to human disturbance. We did not attempt to wade close to them, and watched contentedly as the currents took them away from us. Of all the birds I saw while in the Keys, this flock was one of my favorites!