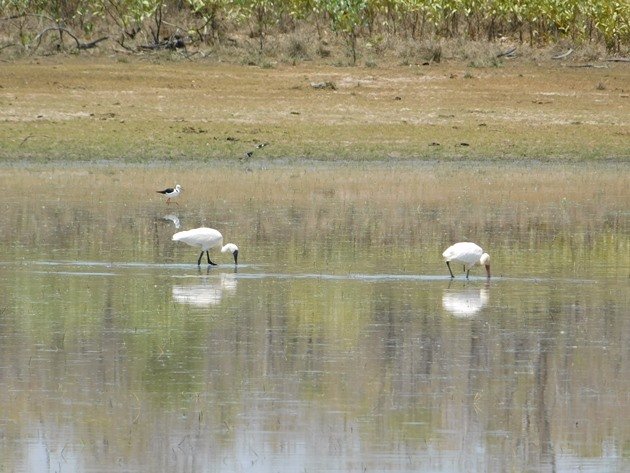 Yellow-billed Spoonbills are not common around Broome, but we do observe them every year or two at the ephemeral lakes during the dry months. All of the birds are taking advantage of the last remaining water and food at this time of year. Royal Spoonbills are more common and they like to frequent the Poo Ponds and the tidal flats close by as well as the ephemeral lake systems.

It was no surprise last weekend to find sixteen Royal Spoonbills feeding at one of the local lakes. We were surprised to see the Yellow-billed Spoonbill, though. Our last encounter with Yellow-billed Spoonbills this year was at the Fortescue River. That was a special encounter, because we had stumbled across a breeding colony. The nests were high up in the trees in the middle of the river and they were constructed with some very large sticks.

Everything looks perfectly normal in the header photo. There are two Spoonbills feeding away. One Royal Spoonbill and one Yellow-billed Spoonbill. I took several photos of them feeding together and then we noticed that the Yellow-billed Spoonbill had a foreign object in its breast. It appears to be a stick. We have no idea how long this foreign object has been stuck in this particular bird, but it was able to feed and fly without any obvious problems.

When the Yellow-billed Spoonbill moved away from the Royal Spoonbill I was able to take some closer photos of the bird. It really does appear to be a stick of some sort that is stuck in its breast. Maybe it happened in the nest, but it is something that we are unlikely to ever know for sure.

Yellow-billed Spoonbill with a foreign object in its breast

When we returned home we rang the Broome Bird Observatory to ask them to keep an eye out for it if they were in the same location in the future. They have since observed it this week at the same location. It appears to be able to feed and fly without issue and we will all continue to monitor it over coming weeks if possible. The foreign object may dislodge at some stage and the bird will just look completely normal.

In 2010 I wrote of a Red Knot that had a bivalve clamped onto its foot. Birds do have unfortunate incidents sometimes.

Where Are You Birding This First Weekend of October 2011?