The leaves are nearly off the trees in New York, which is usually cause, at least in my case, for despair. But the colder it gets, the better the birding at Croton Point Park! For that reason, we hit Croton Point yesterday with my auntÂ  Janet in search of early winter wanderers. No pipits or owls yet, but we did spy the obligatory Bald Eagle, this one a handsome specimen in full mature plumage. The usual Northern Harriers also coursed the mound of the remediated landfill, one of them itself harried by a flock of aggressive American Crows. Besides a single Cooper’s Hawk, additional birds of prey were scarce in a place where raptors usually rule.

Canada Goose and Mallard were the only waterfowl we spotted, but that’s probably because we didn’t spend any time by the water. Instead, we enjoyed a variety of forest and grassland birds. Sparrows, including House, White-throated, and Song, were most abundant. There was no lack of doves, starlings, or juncos either. Yet these species, along with the occasional Red-winged Blackbird, Cedar Waxwing, and Northern Flicker that came our way, are the stars of the upcoming season. When common birds are all you have, you’d better learn to appreciate them 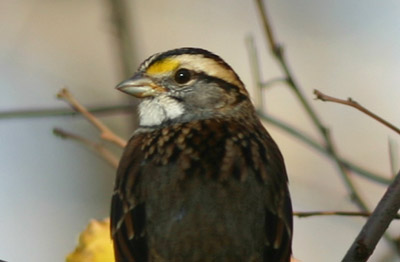