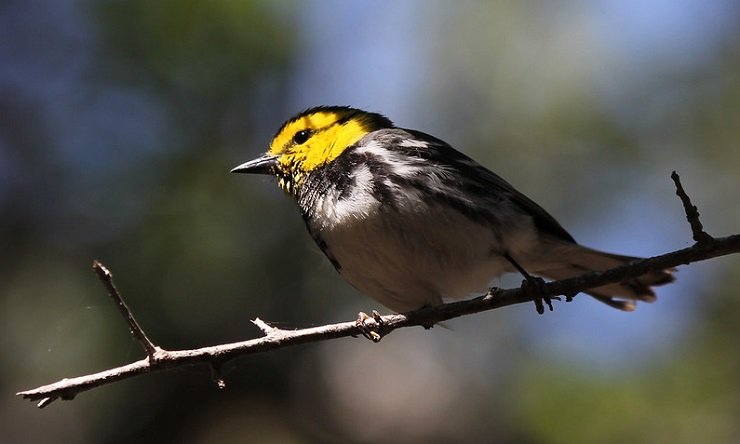 The striking Golden-cheeked Warbler nests only in the hills of central Texas near Austin but a substantial part of those breeding grounds have leveled in favor of development. One of the fastest growing cities in America, Austin is the capital of Texas and home of the University of Texas. Fueled by a dynamic economy, it is now the 11th largest city in the country: more than 2 million people now live in the metropolitan area.

On December 27, 1990, the U.S. Fish and Wildlife Service (FWS) declared the Golden-cheeked Warbler “endangered” under the Endangered Species Act. FWS did not designate “critical habitat” for the warbler, stating it was indeterminable. FWS issued a recovery plan in 1992.

The primary basis for the initial listing was the destruction and fragmentation of its habitat of mature Ashe juniper trees. Ashe juniper bark is used for nest construction, but Ashe juniper has been — and continues to be — removed due to urbanization and other development. Historical habitat destruction and likely future destruction due to projected population growth were deemed significant threats to the warbler.

In 2014, FWS completed a five-year status review, concluding that continuing urbanization and associated habitat destruction and fragmentation still threatened the warbler. The review included substantial new information, including, for example, required size of habitat patches. Although it breeds in areas as small as 25 acres, Golden-cheeked Warblers are much more successful in larger un-fragmented patches. Ultimately, FWS maintained the “endangered” classification, in large part because of continued habitat loss.

In 2015, a group submitted a petition to FWS to delist the warbler, relying on a study conducted by Texas A&M University that reported a far larger population and much more appropriate habitat than prior studies.

Nevertheless, in 2016, FWS denied the petition, finding the Golden-cheeked Warbler “has not been recovered, and due to ongoing, widespread destruction of its habitat, the species continues to be in danger of extinction.” FWS also determined that the petition did not “provide new substantial scientific or commercial information indicating that the petitioned action may be warranted….” 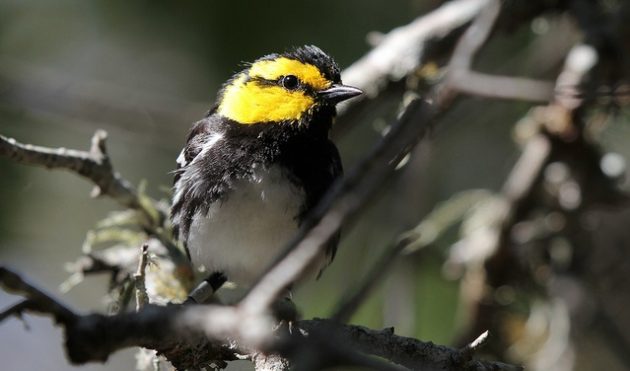 A conflict between development and an endangered bird almost inevitably leads to litigation, as it has for the Sage Grouse and Northern Spotted Owl.

In 2017, the Texas General Land Office, a state agency charged with maximizing revenue derived from Texas public lands, filed a lawsuit in the U.S. District Court for the Western District of Texas seeking to enjoin FWS from maintaining the warbler’s status as “endangered.”

The lawsuit made three arguments for delisting: (1) FWS failed to designate “critical habitat”; (2) FWS failed to consider the new information in the petition; and (3) FWS violated the National Environmental Policy Act (NEPA) by failing to prepare an environmental impact statement. The judge promptly dismissed the first and third arguments because they did not relate to whether the warbler should or should not be listed under the Endangered Species Act.

As to the second argument, on February 6, 2019, the judge granted summary judgment in favor of FWS, finding that FWS adequately considered the information cited in the petition. The Texas A&M study was one of several population studies and others indicated that the Texas A&M study overestimated the warbler’s population. And even if its range and population were larger than initially thought when the warbler was listed, those facts alone would not mean it was not still endangered. The Texas A&M study also did not address ongoing threats to the warbler. Moreover, the listing decisions of FWS are entitled to a level of deference and that deference was not overcome.

The district court’s decision is not necessarily the end of the line, as it may be appealed to the U.S. Court of Appeals for the Fifth Circuit. But the grounds for any appeal appear weak and if there were an appeal, it would take many months to resolve.

UPDATE (5/4/20):  In 2020, the Court of Appeals issued a mixed ruling, affirming the district court in some respects and reversing it in others. As to the denial of the delisting petition, the appellate court held that FWS applied the wrong legal standard and vacated the decision, sending it back to FWS for further proceedings.  See Gen. Land Office v. United States Dep’t of the Interior, 947 F.3d 309 (5th Cir. 2020).

As long as the recovery of the Golden-cheeked Warbler conflicts with development, disputes regarding its listing status will surely continue. As a result, further litigation is likely. Other approaches may help, including conservation banks. And perhaps the warbler will recover (or further study will demonstrate that it has recovered) and delisting can occur by general consensus, as recently occurred with the Black-capped Vireo. But disputes about the science remain ongoing.

One permanent result of the listing of the Golden-cheeked Warbler (and that of the Black-capped Vireo) was the establishment of Balcones Canyonlands NWR, which now protects approximately 25,000 acres near Austin. Future acquisitions will likely increase the amount of protected acreage. Another source of permanently-protected lands are conservation banks, which have also been used to protect warbler habitat.