Some five years ago I was involved in a project of ecotourism evaluation of the river Danube in Serbia, which included the city of Belgrade, founded at the bank of this river. The toughest thing for me, as a local birder, was to choose the most attractive birds because those that attract my attention are generally all too common in the northwest of Europe, from where most visiting birders are coming.

Hence, I asked my friend B.C., a British expat birder who was living in Belgrade, for a suggestion: “The top species is undoubtedly White-tailed Eagle. I was so excited when I saw my first (and they were my first ever) over the Danube from in front of the 25 May Sports Centre. Next in line, for me, are the rivers in winter and the possibility of Black-throated Diver, (Greater) Scaup, Smew, Velvet Scoter etc. – so unexpected in the heart of the continent. Then there are the Pygmy Cormorants. Sometimes you can see both (European) Bee-eaters (below & cover photo) and Golden Orioles in the city, and hear Nightingales singing. The springtime (Black-crowned) Night Herons deserve a mention and finally the (Common) Cranes in Spring. 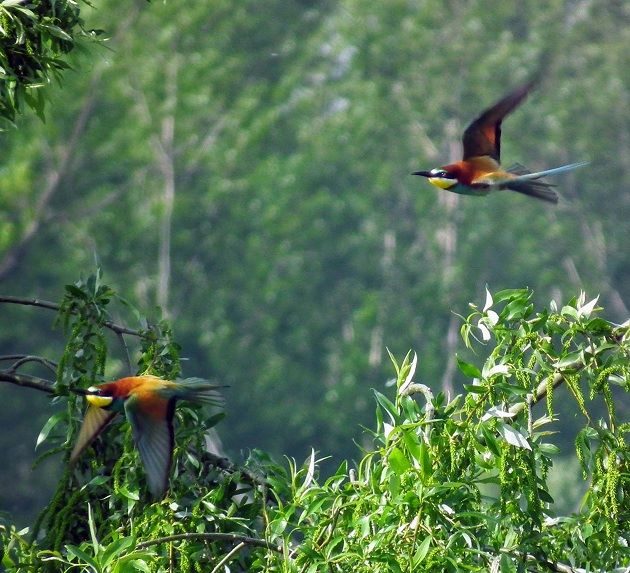 Another British expat birder, G.L., commented further: “With a little work some species can be seen quite easily such as the divers, scaup, scoter, Goosander, Garganey and Long-eared Owl. Of the herons, Squacco and Little Bittern are much more sought after. You could add Middle Spotted and Grey-headed Woodpeckers to the list. Cranes breed in very small numbers in UK but are always impressive en masse. Spoonbills are regular in the UK, but still rare. I would add Great Reed Warbler and Crested Lark, both rare vagrants to the UK. And also Golden Oriole because of its good looks, even though the UK has one tiny breeding site.”

At the time of writing (March 2019), so far there are 248 eBirded species in the wider area officially representing Belgrade. Yet, I narrowed the city limits to encompass only the urbanised areas (220 km2) and skipped many good birding spots nearby. Downsizing the checklist to 217 birds, I asked Geoff Laight to choose the top-20 for me to describe where to watch them. In no particular order, here they are:

Where to watch the top-20 birds of Belgrade

Pygmy Cormorant is easy to observe, in winter from the banks of the Sava and the right, urbanised bank of the Danube River, also around the Veliko Ratno Island Reserve (#1, visible from the riverbanks); in spring best viewed in wetlands along the levees at the left (northern) bank of the Danube.

Squacco Heron – the same as previous, from the left Danube bank levees, also the Veliko Blato Lake (Mika Alas fish farm in the suburb of Krnjaca, #3).

Little Bittern is a reed-bed skulker and much harder to observe. The best spot is the Reva Pond #6. At the time of writing, some large diameter pipes are being laid underneath and the site is a bit disturbed by the works. The second best is the Veliko Blato Lake #3.

Black-crowned Night Heron can be easily seen around the Veliko Ratno Island #1, along the northern bank levees and the Veliko Blato Lake #3.

Purple Heron is another reed-bed skulker, although much larger and far more obvious than the Little Bittern. The Reva Pond #6 and the Veliko Blato Lake #3 are two sites that offer better chances, but with some luck it can be seen in many places with denser, marshy vegetation or in flight above any body of water.

Black Storks migrate along and breed in the Danube flood zone. During migration (late March – early April and September-early October) they can be seen following the river. In the breeding season the best areas are the Danube levees of Beljarica (#4, upriver from Pupin’s Bridge) and the Reva #6 – Capljin #7 zone (downriver from Pancevacki Bridge).

View from the district of Zemun towards downtown Belgrade

White-tailed Eagle breeds along large rivers, wherever water mingles with forest. Adults stay on their territory year-round; immatures wander far. The city outskirts have almost ten breeding pairs, the most famous one at the Veliko Ratno Island #1 at the confluence of the Sava and the Danube Rivers. Ten kilometres up the Danube, in the Beljarica floodplan (#4, reachable from the suburb of Kovilovo) there are three pairs within 9 square kilometres / 3.5 sq. miles. White-tailed Eagles can be seen above the city, too, in areas closer to rivers.

Common Cranes migrate over the city, both inner highly urban areas and the outskirts, mostly in late February-March and November.

European Bee-eater is a bird of open grasslands/arable fields with scattered trees, often using electrical wires to rest and regroup. They can be seen anywhere at the city outskirts, but only rarely within the city. A few small colonies are located in the west of New Belgrade, but the strongest colony is in the eastern suburb of Visnjica (the Danube southern bank). The biggest cluster of spring observation localities is opposite to it, at the northern bank, along the levees to the east of Pancevacki Bridge and at and near the Reva Pond #6. In the second half of August, that is one of the areas where flocks gather prior to migration. The other such late summer area lies along the Beljarica levee #4.

Eurasian Hoopoe uses similar open and sunny habitats like the previous species. It is rarely seen within the city, but is possible anywhere at the outskirts. One such area offering better chances is the northern Danube bank levee.

Alpine Swifts breed at only a dozen sites in the country, but since 2018, downtown Belgrade is among them. Several pairs have chosen the Albania Palace, a high-rise at Terazije St. and the first skyscraper built in Southeast Europe, in 1939. The origin of its name is traced back to the period before it was built, when the namesake tavern occupied the spot.

Eurasian Scops Owl is a bird of open forests and scattered trees, parks, orchards, abandoned houses, etc. In the city, it is possible wherever there is a speck of greenery, yet it is commonly heard, but rarely seen.

Syrian Woodpecker is a species of forest edges or open woodland and parks; it doesn’t go into closed canopy forest. It can be seen in parks, riparian forest edges, along hedges, even in fields with a few scattered trees. In the city, it avoids deeper and larger forests (a domain of the next two species), but visits small groups of trees or tree-lined streets. 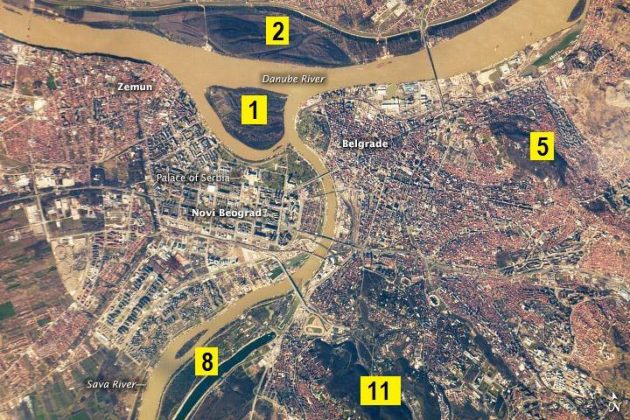 Middle Spotted Woodpecker is a species of well-developed forests. The best areas inside the city are Kosutnjak Park #11, Zvezdarska Forest #5 and Ada Ciganlija Island #8. Near the city, this pecker is particularly common at Avala Mountain #10 and in the Bojcinska Forest Reserve (#9, next to Progar village, west of Belgrade).

Black Woodpecker was until recently restricted to deep beech and oak forests and good habitats of that type include Kosutnjak (#11, an old oak forest and a former royal hunting preserve) and Avala Mountain (#10, beech forests). But, this species is adapting to different types and disturbed forests, so it can be found in the planted park-forest of mostly alien tree species such as Zvezdarska #5, or in alien poplar plantations along the north bank of the Danube. 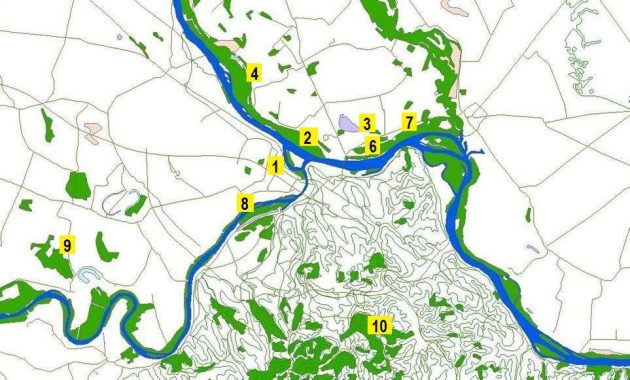 Lesser Spotted Woodpecker is normally seen in scrub and on thinner branches of the forest undergrowth. It can be seen anywhere, from river banks and islands to city parks and levees of the Danube’s northern bank.

Red-backed Shrike is a characteristic species of open terrains with scattered bushes. In the city, this shrike is mostly observed along the riverbanks. At the outskirts, the most productive area the same as for the Hoopoe, are the Danube levees.

Wherever there are reeds, there are Great Reed Warblers, the easiest and the most numerous of the Acrocs. The only problem with Belgrade is that there are very few reed-beds. Again, the Reva Pond #6 and the Veliko Blato Lake #3 offer some of the largest reed-beds around, but even several square metres of reeds should have a Great Reed Warbler.

Icterine Warbler is both harder to spot and not overly easy to recognize. Listening for its (fortunately) characteristic song in May – first half of June is your best bet to locate it, but seeing it remains a challenge. Although it can be found further from the rivers, the best sites are riparian forest with dense bushy undergrowth at the Veliko Ratno Island (#1, reachable either by boat, or from the beginning of the swimming season in June by pontoon bridge) or in the floodplain at the northern bank of the Danube (e.g. Beljarica #4 or Kozara #2 floodplains).

Short-toed Treecreeper is a bit tricky. First, it is hard to spot, even harder to observe long enough to see the markings, and your best bet is its song – if the bird is cooperative, that is. In Serbia, the more northerly Eurasian Treecreeper is mostly a species of mountain beech forests, as opposed to the Short-toed which mostly inhabits lower elevation oak forests. And statistically, it is true in most cases. But, recent research found the Eurasian breeding in riparian forests along the Danube, where only the Short-toed was supposed to be. In spring, your best bets for the Short-toed would be Kosutnjak Park #11 and the Avala Mountain #10 (but in winter Eurasian Treecreepers come down from their mountains to overwinter in those same areas).

…and how to get there: 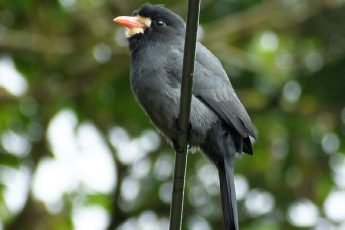