So much of the US is getting dumped on with snow.  At first it seemed like a nice holiday treat until you realize that your city has called its sixth Snow Emergency and it’s still technically autumn.  I love snow, I wouldn’t live in Minnesota if I didn’t, but you have to have a plan in place for physical activity or the effects of winter will sneak up on you. It’s interesting to note when friends start to snap from cabin fever.  Their posts on Facebook and Twitter go from lighthearted movie references to quoting Crime and Punishment. I’ve been particularly antsy.  I work part time for the National Park Service and the other half of my time is spent working from home.  My husband has 11 days off through the holidays and though I’m so grateful he enjoys spending time with me, the interruption in my routine and spousal shenanigans in the work place is making me crazy.  Plus, we’ve had so many snows, the roads are incredibly narrow.  Trips that used to take 15 minutes by car can be 45 minutes.  Buses run late and sidewalks are barely cleared.  Parking restrictions vary from city to city.  We’re running out of places to put snow.  In many ways it seems easier to stay indoors.  But I needed to get out, so I headed to the lakes I normally bike around and strolled on the snow covered ice. One of my favorite lakes in my neighborhood is Lake of the Isles.  Two islands are centered in the lake and when you canoe around them in summer, all sorts of herons are tucked along the edges.  Signs are posted by the Minneapolis Park Board that landing on the islands is prohibited because it’s a “refuge for wildlife.”  However, in winter, those signs are ignored and well worn trails are made on the islands by intrepid folks in snow shoes.  I was following one of the trails on the island scanning the trees for small owls when a shape on the other side caught my attention: It was definitely raptor shaped and at first glance without my bins, I thought, “peregrine.” Yep.  It was a Peregrine Falcon alright.  I wondered if I could get around the island and position myself between the falcon and the sun for better photos.  I had to have walked right underneath the bird (without realizing it–doh) when I got to the island and it didn’t flush.  How many birds do we miss in a day? Ten minutes of drudging in deep snow on the ice did it.  I set up my scope and the bird again took a look at me, but in no way appeared disturbed by the scope.  Based on the number of crosscountry skiers that passed beneath it, this urban falcon was no stranger to humans. The adult peregrine gave me a good stare, then went about its business of watching ducks, crows and pigeons overhead. There was one rather foolhardy gray squirrel on this island. It appeared to make a cautious beeline for the falcon. It’s final purpose appeared to be eating the buds on the branches behind the falcon, but still the squirrel was within six feet of the predatory bird. Granted, this is a peregrine, a falcon more likely to go for other birds, but still it seemed a ballsy move for the squirrel. I wasn’t expecting much on this well traveled lake in winter, but I was happy I got it.  The trip gave me a good workout.  It was in the 30s so I worked up a good sweat while trudging through the snow.  A few skiers passed and asked what I was trying to get a photo of.  Even they were surprised at a peregrine. The falcon was perched in a way that it had a view of downtown Minneapolis.  I wondered if it was one of the birds who nested there.  There’s a peregrine nest box on the building with the red arrow.

I should mention that walking on an ice covered lake is technically never safe.  We’ve had several days with temperatures that have been close to zero degrees Fahrenheit.  This particular lake had several people on it, a few ice fishing houses and snow sculpture.  Practice common sense when walking on a frozen lake and don’t go out unless you are very sure the ice is thick enough.  You don’t want to end up like this poor birder in Illinois. 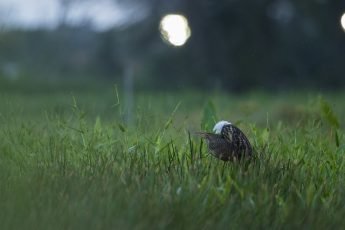