As introductions to tropical Pacific birding go, you could do a lot worse than Fiji. Their combination of isolation and size makes them a great place to see lots of local and Pacific endemics. More importantly the airport in Nadi (pronounced Nandi) on the main island of Viti Levu is a major air hub and frequent stop on flights between the United States and Australia or New Zealand. Throw in some good beaches and great diving and you have a popular place to visit for a lot of tourists, and also birders wanting to start their Pacific birding lists.

It was just such a layover that landed me in Fiji a few years ago. It wasn’t even the first layover that had gotten me there, but I enjoyed the place so much I leapt at the opportunity to head back. I had decided to go to the southern island of Kadavu (pronounced Kandavu – see a pattern yet?), as the island had two features I really wanted, great reefs and great birding. My overnight flight from Los Angeles (an empty Air Pacific flight with lots of space to sleep and plenty of champagne flowing) had left me cheerful and ready to get on my next flight to Kadavu, but a cyclonic storm to the south meant that I had to spend a day in Nadi before I could head out. I stayed on a small beach resort just next to the small town, but even here there was plenty to keep a birder occupied, including a bunch of Fiji Woodswallows on all the wires and some White-faced Herons stalking the bushes around the resort. As myself and some other stranded Kadavu-bound travellers sat watching the grey clouds over the sea with a beer or two I also managed to find a tiny Fiji Parrotfinch in the grasses. These aren’t exactly hard to find in parts of Fiji (unlike the much rarer Pink-billed Parrotfinch), a contrast to some other brightly coloured parrotfinches on some other islands. The next morning, one short hop across the water, I was in Vunisea, the village that holds Kadavu’s airstrip. The strip (and village) are situated on a neck between the ocean on the northern and southern sides of the island. Because my flight had been delayed my ride to where I was staying had been delayed, but this gave me time to bird the village and airstrip. And let me say, it was very productive. I quickly got a good view of an Orange-breasted Honeyeater, a local endemic, and the Vanikoro Flycatcher, a geographically disjunct oddity that occurs only in Fiji and the Solomon islands. There were also Collared Lories, not only a species endemic to Fiji but a genus, as well as Polynesian Trillers, Collared Kingfishers and Pacific Swallows.

But the two stars were two of Kadavu’s endemics. The thirty kilometer island has four endemics, a pretty good ratio if you ask me! The first was the Kadavu Honeyeater, another endemic genus! The species replaces the common Wattled Honeyeater that can be found across the rest of Fiji’s islands, as well as the rest of Polynesia. But the star of Kadavu was also the easiest species to see in the village, the Crimson Shining-parrot. I can state without hesitation that this species is unquestionably the most attractive parrot I have ever seen in my entire life. The Crimson Shining-parrot has an astonishing sheen to its plumage that no photo I have ever seen has managed to capture, and a long-winged languid crow-like flight unlike any parrot I have ever seen. If it sounds like I am scrambling for superlatives and failing that is because I am. If you were inclined to list ten parrots to see in your life the this species should be there with the Scarlet Macaw and Kakapo. Part of the wonderment was that it, rather a number of them, were flying around the biggest village in their range. Long may they remain common where they belong. Eventually I was able to catch a boat to the resort I was staying at. The diving lodge was called Matava, and it is on the southern coast of the island. The ride was pretty fantastic, as it ran along a good length of the island, with rainforest down to the shore on one side and the breakers of the Great Astrolabe Reef on the other. The Great Astrolabe Reef is an internationally famous barrier reef that runs along the length of Kadavu. It is popular with surfers for its great waves and divers fro its profusion of marine life.

Matava is set amongst the forest at the eastern end of the island, and from the deck one can watch the breakers crashing on the reef and passing seabirds like Lesser Frigatebirds. I also saw an unusual bit of kleptoparasitism, a Great Crested Tern being chased by an Eastern Reef Egret! There isn’t much of a beach right below the resort, but if you wade through the  sandy gravel across a submerged spit to a little island just offshore you’ll find not only a small beach but a great snorkelling spot. This are was particularly good for the dangerous looking Lionfish, and it was here that I had my first and as yet only encounter with a sea snake, probably a Banded Sea Krait.

The diving around Matava is good for Manta Rays, but I have the worst luck with that particular speciality and I didn’t see any on my half dozen dives. If I hadn’t seen some in West Australia back in 2000 I would probably have dismissed the species as mythical by this point. But there is still great stuff to see in the fantastic reefs around Kadavu, including pipefish (elongated relatives of seahorses) Moorish Idols, butterflyfish, three kinds of anemone fish (Pink, Clark’s, and Black-and-Red Anemonefish), Bicolour Angefish, groupers, glassfish, garden eels as well as two kinds of dartfish, the Fire dartfish and Two-tone dartfish. Seeing a Manta Ray swooping over the reef would be the highlight of any trip. Except mine, because I almost always dip on this guy. Image used with permission of Matava Eco Lodge.

The birding in the gardens and forest behind the resort was good too. Polynesian Trillers and Silvereyes were common in the gardens, and were hunted by several Fiji Goshawks that were often seen in  the trees around the place. Also seen in the gardens were a species of whistler. At the time I assumed that they were the local subspecies of Golden Whistler, but that massive sprawling mess of a species has recently been broken up by some authors, and this has resulted in two species in Fiji. The Kadavu race is now placed in the White-throated Whistler, along with birds from Gau and Lau in Fiji and some birds in the Solomon Islands. The remainder of Fiji’s whistlers are in the Fiji Whistler, and it seems that Fiji was invaded by whistlers on two occasions. Another biogeographical oddity is the local fantail. Whereas most of Fiji shares the Streaked Fantail with New Caledonia and Vanuatu, Kadavu has its own species, the Kadavu Fantail. This bird was also seen easily around the resort, as was one final endemic, the Fiji Bush-warbler. One final treat was a Long-tailed Cuckoo, a winter visitor from New Zealand, that I flushed up out of some bushes. A birder visiting Fiji might be able to locate all of Kadavu’s endemics in a day (the remaining species, the Whistling Dove, eluded me, but I wasn’t trying too hard) and might be tempted to fly on quickly to get more birds elsewhere. To my mind this would be a mistake, the island has a lot more to offer than just four endemics and a few near endemics, it has stunning scenery, good food, good diving and a relaxing break from the pressures of the real world. Not to mention the opportunity not to see a manta ray! 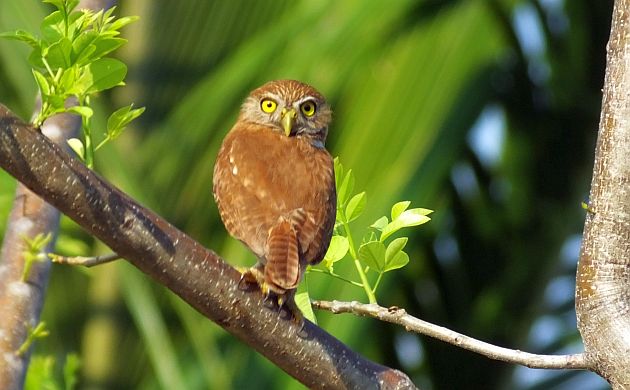 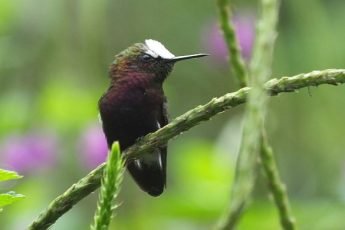